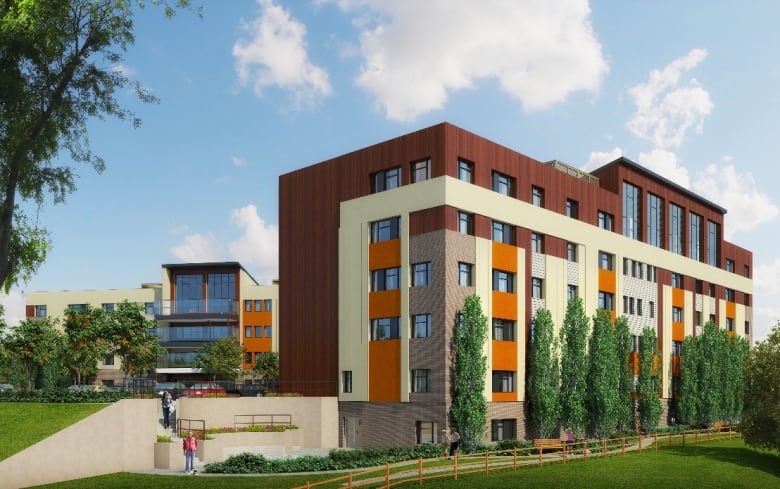 The first time he visited Kelowna before studying physics at the University of British Columbia’s Okanagan campus (UBCO) this fall, Regina’s Mike Marshall was surprised to find everything was so much more expensive than in his hometown.

But Marshall, 25, says he was even more surprised when his friend, who also came from Saskatchewan to study at UBCO, later learned from a relative that there were two very affordable dorm rooms available for a monthly rent of $500 at a seniors complex.

“[It was] total happenstance and luck,” he told Sarah Penton, the host of CBC’s Radio West.

Marshall and his friend Paul Anderson are living in two of the four 144-square-feet rooms in the basement of the five-storey Vineyards Residence.

The building, which opened last July in Kelowna’s Glenmore neighbourhood, has 134 units designed to accommodate seniors with Alzheimer’s and other forms of dementia, including 101 units designated for long-term care and 33 for assisted living.

Janelle Hynes, the facility’s community relations and marketing manager, says its owner, Sussex Retirement Living based in Ottawa, decided to build four dorm rooms for young people as part of the intergenerational living arrangements it had envisioned.

Hynes says she briefly mentioned these arrangements to media when the facility was launched, but it wasn’t until this spring that she received Marshall and Anderson’s email expressing interest in renting the rooms.

Volunteering in exchange for affordable housing

Kelowna, home to over 222,000 people, is one of the fastest-growing metropolitan areas in Canada by population.

UBCO students have been facing a rental crunch: a one-bedroom dorm at the university’s current residences costs about $1,200 per month, while an apartment of the same size off-campus could cost nearly $1,700 per month, according to Rentals.ca.

Each youth dorm at Vineyards Residence comes with a Murphy bed, a built-in desk, Wi-Fi service and laundry facilities. In exchange for a very affordable rent, tenants must agree to volunteer their services at least 10 hours per week to seniors who live in the same building.

Tenants must also participate in a Zoom interview with the facility managers and accept background checks before they are allowed to move in.

Marshall says he has been hosting a “gentlemen’s club” every other Thursday, where he plays cards and vinyl records with a small group of male seniors, while Anderson plays hymns with his cello every Sunday inside the facility.

“We’ll do anything from baking, or we’ll set up a little bowling alley forum to just try to have some fun for an hour [and] kill some time.”

He says the seniors he’s living with are smarter than many people may think.

“That multi-generational approach [to living] is just the best way to treat our elders.”

Radio West10:47Two UBCO students have moved into a longterm care home in Kelowna to bring together multiple generations