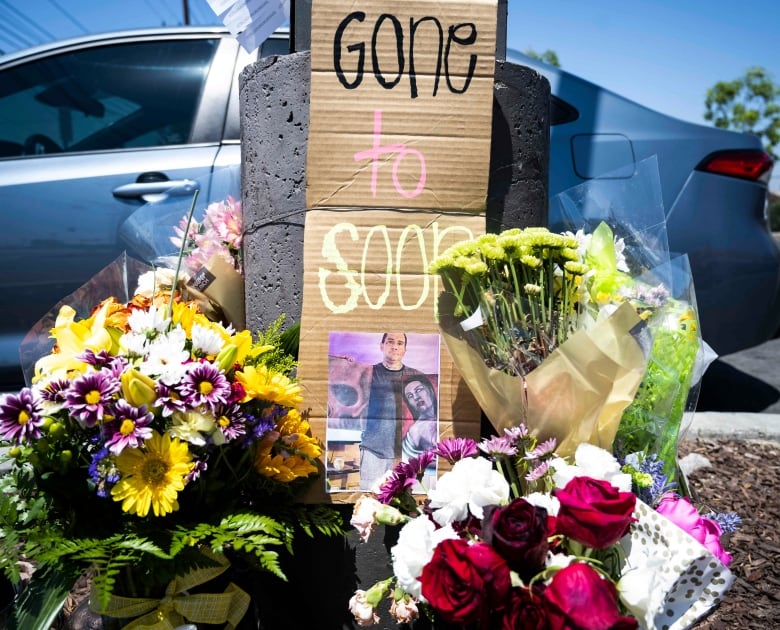 Two men were arrested Friday in connection with a series of robberies at Southern California 7-Eleven stores that left two people dead and three wounded. Police said the men are suspected in another killing and other crimes in the region.

A half-dozen 7-Elevens and a doughnut shop were robbed within five hours early Monday in San Bernardino, Orange and Riverside counties, setting off an intensive manhunt that resulted in the arrests of the two men in Los Angeles. One is 20 and the other 44, and both are from L.A.

In addition to announcing that the men are suspected of a July 9 killing in L.A., police revealed that one of the two people fatally shot on Monday was killed after trying to intervene when one of the suspects tried to rob another person.

“This was a reign of terror,” Orange County District Attorney Todd Spitzer said at a news conference. He said prosecutors expect to file murder, attempted murder and robbery charges.

Authorities also expect that at least one of the men will be tied to “a number of crimes” in the L.A. area after additional investigation.

Law enforcement offered few details into the case, only saying “technology” played a role in the apprehension and the suspects had been tracked by a task force when they were arrested with a “minor use of force” that sent one of the men to the hospital. No shots were fired.

Police also did not say if they believe the men targeted 7-Elevens because Monday’s date was July 11, or 7/11.

Santa Ana Mayor Vicente Sarmiento said the arrests ended the fear that had settled in his city this week.

“7-Elevens are the quintessential convenience store,” he said. “That’s where our community shops.”

A clerk, Matthew Hirsch, 40, was shot and killed at a Brea store, and Matthew Rule, 24, was gunned down in the parking lot of a Santa Ana store. Two of the three wounded have been released from hospitals.

Rule had intervened when the suspect was trying to rob someone else, authorities said, and “tried to redirect the suspect. The suspect turns around and [shoots] our victim, kills him on the spot,” Santa Ana Police Chief David Valentin said.

Hirsch’s father, Jim Hirsch, told The Associated Press that his son had gotten sober more than a year ago after a longtime drug addiction. He had landed a stable job working overnight shifts at the Brea location, lived with his girlfriend in a nearby apartment and spoke to his father every day.

“He hadn’t had time to enjoy a normal life,” his father said. “He goes through a struggle for goodness and it ends in a shooting.”

A customer was shot in the head and gravely wounded at a Riverside store, and two people, one of them a clerk, were shot in La Habra but were expected to survive.

Russell Browning was shot in the face as he sat in his car outside the La Habra store, he told FOX 11. Browning said he saw the suspect and the clerk come out of the store.

“He was taller than my car, so I didn’t get a good look at him. And then all of a sudden, he just lifted the gun and shot,” he said.

The Riverside shooting victim was identified by his family as Jason Harrell, 46. He was breathing on his own and was no longer in a coma, his brother David Makin told KNBC-TV earlier this week.

The 7-Eleven convenience store chain on Wednesday offered a $100,000 US reward for information leading to the arrest and conviction of the masked gunman. Authorities said it was not immediately clear whether anyone will receive money from the reward fund.