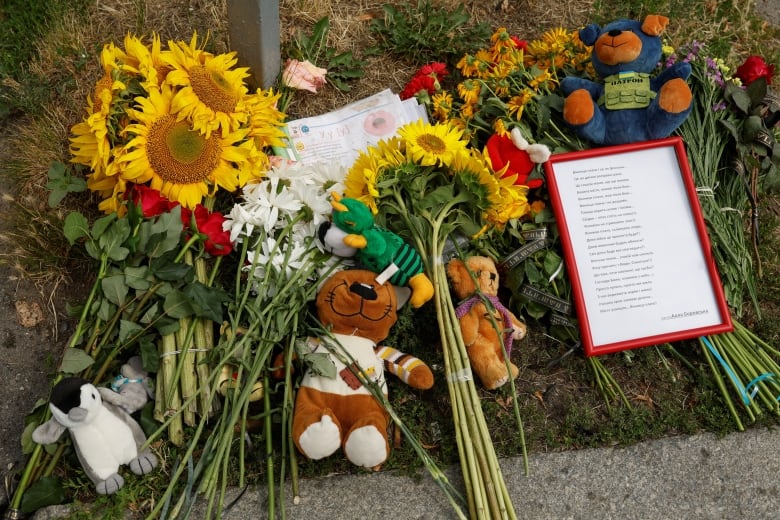 A Ukrainian city far from the front line grieved on Friday for its dead, including a four-year-old girl, a day after a Russian missile attack killed at least 23 people and wounded scores.

Ukraine said Thursday’s strike on an office building in Vinnytsia, a city of 370,000 people about 200 kilometres southwest of Kyiv, had been carried out with Kalibr cruise missiles launched from a Russian submarine in the Black Sea.

The attack was the latest in recent weeks of a series of Russian hits using long-range missiles on crowded buildings in cities far from the front, each killing dozens of people.

Residents placed teddy bears and flowers at a makeshift memorial.

Among the dead was Liza, a four-year-old girl with Down syndrome, found in the debris next to a pram. Images of her pushing the same pram, posted by her mother on a blog less than two hours before the attack, quickly went viral.

Her severely injured mother, Iryna Dmitrieva, was being kept in an information blackout at a hospital for fear that finding out about her daughter would kill her, doctors said.

“She is suffering from burns, chest injuries, abdominal injuries, liver and spleen injuries. We have stitched the organs together; the bones were crushed as if she went through a meat grinder,” Oleksandr Fomin, chief doctor at the Vinnytsia Emergency Hospital, said. Were she told of her daughter’s death, “we would lose her.”

President Volodymyr Zelenskyy’s wife, Olena, tweeted that she recognized the girl, who had once been among a group of disabled children who painted Christmas ornaments with the first lady in a holiday video.

The building housed an officers’ club, which Russia’s defence ministry said was being used for a meeting between military officials and foreign arms suppliers. It added: “The attack resulted in the elimination of the participants.”

Ukraine said the club functioned as a cultural centre. The building also housed shops, commercial offices and a concert hall, where musicians were rehearsing for a pop concert planned for that night. A nearby medical centre was destroyed.

A security camera captured debris flying at the moment of the blast, with two cyclists diving for cover before a cloud of dust darkens the sky.

Russian missiles struck the central Ukrainian city of Vinnytsia Thursday, far from the front lines of the conflict. Ukrainian officials say at least 23 people were killed.

“Unfortunately, this is not the final number,” he said in a video address to an international conference aimed at prosecuting war crimes in Ukraine. An official in Zelenskyy’s office said 11 people were missing, and 197 people had sought medical treatment.

Authorities in the southern city of Mykolaiv, closer to the front lines, reported fresh strikes on Friday that wounded at least two people. They released video pictures of firefighters battling the blaze in the rubble.

“This time, they hit Mykolaiv around 7:50 a.m., knowing full well that there were already many people on the streets at that time. Real terrorists!” Mykolaiv Mayor Oleksandr Senkevych posted on social media.

The stepped-up Russian attacks on cities far from the front come at a time when momentum appears to be shifting after weeks of Russian gains.

Since capturing the eastern industrial cities of Severodonetsk and Lysychansk in battles that killed thousands of troops on both sides, Russia has paused in its advance. A Ukrainian general said Kyiv had not lost “a single metre” of territory in a week.

Ukraine, meanwhile, has unleashed new HIMARS rocket systems received from the United States, striking targets deep in Russian-held territory. It appears to have blown up depots of ammunition that Moscow relies on for massive artillery barrages.

The first M270 systems that will give Ukraine additional multi-rocket firepower have arrived in the country, Ukraine’s defence minister said on Friday. Russia fired its own multi-launch rocket system at Slovyansk on Friday, the eastern city’s mayor said.

Ukraine says it is preparing for a counterattack in the coming weeks to recapture a swath of southern territory near the Black Sea coast.

Despite the bloodshed, both sides have described progress towards an agreement to lift a blockade restricting the export of Ukrainian grain. Mediator Turkey has said a deal could be signed next week.

When asked if that timeline was realistic, a senior Ukrainian official told Reuters, “We really hope so. We’re hurrying as fast as we can.” The source asked not to be identified.

Russia’s defence ministry said an agreement was close. Russia’s negotiator, however, cautioned that a grains deal will not lead to a resumption of peace talks.

A deal would probably involve inspections of vessels to ensure Ukraine was not bringing in arms, and guarantees from Western countries that Russia’s own food exports are exempt from sanctions.

Moscow welcomed a written clarification by Washington on Thursday that banks, insurers and shippers would not be targeted by sanctions for facilitating shipments of Russian grain and fertilizer.

The war dominated a meeting of G20 finance ministers in Indonesia on Friday. The conflict involving two of the world’s top grain exporters and one of its main oil and gas producers is causing inflation, financial crisis, global shortages of food and energy, and, potentially, hunger.

WATCH | What happened in Week 21 of Russia’s attack on Ukraine:

What happened in Week 21 of Russia’s attack on Ukraine

Russian missiles struck cities in central and southwest Ukraine far from the front lines of the conflict and Ukraine said Canada’s decision to return turbines used in a pipeline to carry natural gas from Russia to Germany will be viewed as a sign of weakness by Moscow. Here’s a recap of the war in Ukraine from July 9 to July 15.

Russia calls its Feb. 24 intervention a “special military operation” to disarm Ukraine and root out nationalists. Kyiv and its allies call it an attempt to reconquer a country that broke free of Moscow’s rule in 1991.

Britain summoned Russia’s ambassador after Russian-backed separatists in eastern Ukraine said a British man in their custody had died of health problems. The separatists, who captured Paul Urey, 45, in April, had accused him of being a mercenary. A British relief group, Presidium Network, described him as a humanitarian volunteer.