A decent romantic drama that engages you then and there 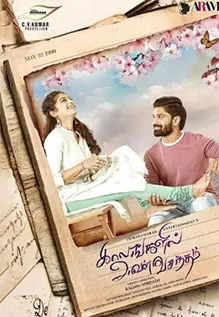 Kaalangalil Aval Vasantham Movie Synopsis: A guy who is obsessed on having a filmy romantic life has to understand what love truly means after marrying a no nonsense entrepreneur

Kaalangalil Aval Vasantham Movie Review: While Kollywood filmmakers have been churning out a lot of hard-hitting love stories in the recent past (which is welcoming), it’s quite refreshing to watch a light-hearted romantic drama that keeps its conflicts very simple. Debutant director Raghav Mirdath’s Kalangalil Aval Vasandham is all about how a wanna-be lover boy sorts out all his differences with his affectionate wife leaving his egoistic attributes. The film does have few issues, especially towards the climax, however, it slightly manages to engage us then and there with some decent writing.

Shyam ( Kaushik Ram) is a happy-go-lucky youngster who thinks movies are reflections of life. He is crazy about films and wants to have a romantic life that’s filmy, similar to hit Mani Ratnam films. For instance, in the very first scene, he proposes to a girl in pouring rain. A few minutes into the film, we get introduced to Radhe (Anjali Nair), an entrepreneur, who finds Shyam attractive at the very first sight. With no second thoughts, she asks him if he’s interested to marry her. While Shyam initially finds it strange, he realises that Radhe’s proposal is genuine and doesn’t want to miss a beautiful girl like her in his life. He agrees and the two get hitched.

While everything goes well, trouble begins when Radhe gets to know about Shyam. She comes across his diary that has steps listed out to impress girls along with references of scenes from hit Tamil films. Also, Anuradha (Heroshini), whom Shyam had an attraction before his wedding, comes into their lives again. Though Radhe knows that Shyam is harmless, she finds it tough to accept the way he is.

Can Radhe make Shyam a better person or he would remain in his own world without understanding what true love is?

Kalangalil Aval Vasantham is interesting in parts. From the character sketches of the lead roles to the staging, it gets a few things right. In fact, a few minutes into the film, we are transported into the world of Radhe who is deeply in love with Shyam. The romantic sequences involving the two are pretty decent.

The conflicts here are simple and are not something new for the audience. Yet, ornate dialogues and an interesting screenplay with static cinematography manages to keep the audience engaged through the first half. Though the team achieves its objective partially, the film falters completely in the second half. Especially, the climax sequence, where the hero makes his enemies emotional by delivering a monologue on his love for his wife and how only love can save the world.

Kaushik Ram’s performance is decent and apt for a character of this sorts. However, sometimes, the way he delivers his dialogues doesn’t fit the bill. Anjali Nair’s beautiful screen presence is one of the biggest strengths of the film. Her character as Radhe has a lot of shades to it and it’s quite effective. Her performance is matured and is something to watch out for. Heroshini, who plays the role of Anuradha, has done a decent job as well. Her sequences are engaging and doesn’t fall out of place. RJ Vigneshkanth and Bigg Boss fame Anitha Sampath play Kaushik’s colleagues in the film and delivered a decent performance.

Gopi Jagadeeswaran’s cinematography and Hari SR’s background score have helped to elevate a few sequences. Kalangalil Aval Vasantham could have been a much better film if the writing would have a been consistent throughout.