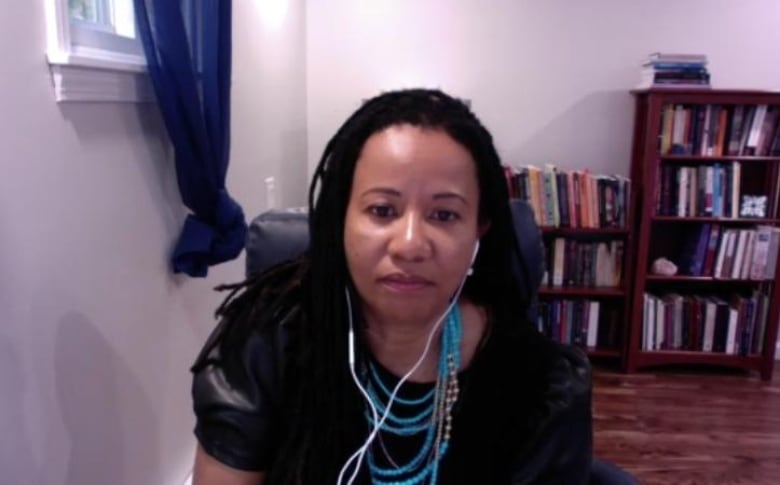 Charmaine Nelson finds it quite ironic that a Halifax-based institute she founded to study slavery in Canada closed after she felt discriminated against as a Black woman.

The prominent art historian, educator and author resigned from her position as the director of the Institute for the Study of Canadian Slavery at NSCAD University earlier this year. She says the undermining of Black academics is what racism looks like in universities and is a problem across Canada.

“NSCAD, like other institutions, underestimates what it takes to actually not just hire a Black female professor, but to support me and to make sure I have what it takes for me to succeed, because the Canadian myth of racial tolerance wants us to believe that the institution is basically an objective space where everybody can thrive,” said Nelson in an interview.

In 2020, Nelson left a 17-year career as a professor at McGill University in Montreal for a new role and life in Nova Scotia with her husband. She joined NSCAD as a Tier I Canada Research Chair in transatlantic Black diasporic art and community engagement — a prestigious title awarded to world-renowned researchers.

Within a year at NSCAD, Nelson had made the decision to leave. She said she constantly felt undermined and as though she was being questioned about her ability to run an institute.

Why did Nelson leave?

Nelson said she was not offered any orientation when she joined the post-secondary art school, which left her scrambling to find answers. Questions about the parameters of her authority as the institute’s director were met with silence, she said.

“I just would not get an answer to those emails,” said Nelson, adding it made her feel infantilized.

Nelson said she was blocked from giving her student employees raises through a grant she won from the federal government.

When an administrator found an error in a handbook Nelson had put together for new fellows at the institute, the educator said she was reprimanded in an email sent to her students and colleagues.

She said the last straw was when she tried to access $10,000 that NSCAD had set aside from her salary to use toward hiring a student in the new year. Nelson said the university told her the money didn’t roll over to the new year.

“So I’m like, ‘What did you do with the money?’ No response,” said Nelson, adding that someone at the university told her the money was not from her salary when she tried to fight for it.

She sought a lawyer and successfully filed a grievance through NSCAD’s faculty union to retrieve the money. The union declined to comment on Nelson’s case.

“What type of university attempts to steal thousands of dollars from a professor that they know the professor is going to give to a student?” said Nelson.

“This is how these white dominant institutions and their racism and sexism get you caught up in fighting to survive and fighting over things that should never be happening and divert your energies and intention from doing your work.”

She said underrepresentation of the BIPOC community — Black, Indigenous and people of colour — results in mistreatment by white colleagues and students on campus.

Peggy Shannon, who was appointed NSCAD president in July, declined a phone interview.

In an emailed response to questions from CBC News, Shannon would not say whether the university took any action on Nelson’s complaints of racism.

She said the university “takes racism and structural racism very seriously” and has “robust third-party investigation options” but did not respond when CBC News asked specifically whether there was an investigation into the issues raised by Nelson.

Shannon continued on in her email to say that Nelson “expressed her disappointment that NSCAD was unable to provide a spousal appointment for her non-academic partner, and we are aware that Dr. Nelson and her spouse did not have the experience in Halifax that they were expecting.”

Nelson told CBC News the fact NSCAD could not help find a job for her spouse, who has worked as a professional baseball coach and a firefighter, was not the determining factor in her decision to leave.

Nelson says her goal was to run the institute — believed to be the first of its kind in Canada — for 14 years until she retired. NSCAD had reached out to her about two years ago to apply for the job when it was looking for an expert in Black or Indigenous visual culture, something Nelson applauds the university for.

Her role as a research chair, both a job and an award by the federal government, allowed her to pick the institute’s purpose. A $100,000 grant from the Canadian Foundation of Innovation helped renovate space at the university’s Fountain Campus in downtown Halifax. It was a place where students could combine their art with traditional research to tell the 200-year-old history of slavery in Canada.

What happens to the institution?

While the physical building still exists, it will no longer operate as the Institute for the Study of Canadian Slavery, which was intellectual property owned by Nelson.

NSCAD chief of staff Bruce DeBaie said the funding for the institute remains with the university. He said the institute’s mandate will likely evolve and operate under a different name once it hires a new director.

Nelson rebranded the mission as Slavery North and has since moved to the U.S. where she is launching a research centre at the University of Massachusetts that will study American and Canadian slavery.

Nelson said she gave an exit interview on her own accord detailing her experiences to Shannon. She didn’t entertain the president’s request to “celebrate” her before she left because it wasn’t an amicable split.

Still, she said the university sent an email to staff that congratulated Nelson and mentioned it is in talks with her for future collaborations, which she described as “nonsense.”

Instead of NSCAD acknowledging her concerns and pledging to do better, Nelson said the email left the impression that she had “just, like, lost my mind” and walked away from a prestigious contract “for nothing.”

“That really upset me. That disturbed me,” said Nelson. “That saddened me because that was a missed opportunity.”

NSCAD said it recently hired several new faculty members who identify as Black, Indigenous, people of colour, or members of a racialized group. The cohort hire initiative is part of the university’s “ongoing development of anti-racist practices and the dismantling of oppressive institutional structures,” according to NSCAD’s website.

The university said Shannon is arranging to meet individually with the new faculty members.