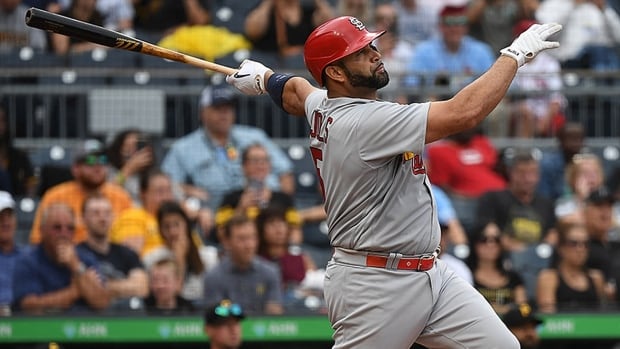 Albert Pujols hit his 697th home run, moving past Alex Rodriguez into fourth place on the career list and doing it in dramatic fashion with a ninth-inning drive that rallied the visiting St. Louis Cardinals over the Pittsburgh Pirates 4-3 on Sunday.

The National League Central-leading Cardinals trailed 2-1 when Pujols connected for a two-run drive.

The 42-year-old Pujols has 21 games left in his 22nd and final season in the big leagues.

The Cardinals went to the ninth inning trailing 2-0 but scored four runs off Chase DeJong (4-2).

St. Louis had been shut out on three hits through the first eight innings but rallied for their eighth win in their last 11 games. The Pirates missed a chance to win their first series since sweeping Milwaukee from Aug. 2-4.

The Cardinals clinched their 15th consecutive winning season Saturday night with a 7-5 victory over the Pirates. That ties the franchise record set from 1939-53.

With St. Louis trailing 3-1 in the sixth inning, Pujols connected on a first-pitch slider from JT Brubaker. He sent a two-run shot 418 feet into the left-field bleachers at PNC Park, launched with an exit velocity of 111.2 miles per hour.

His RBI single in the eighth made it 4-4.

The Cardinals are off Monday before opening a three-game home series with Milwaukee on Tuesday. Left-hander Jordan Montgomery (8-3, 3.08) will start for St. Louis.

He is 5-0 with a 1.45 earned-run average in seven starts since being acquired from the New York Yankees in a trade.