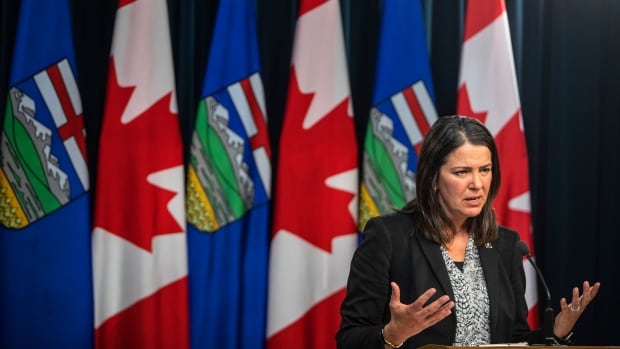 Days after Alberta Premier Danielle Smith’s comments about the Russian-Ukraine war came to light, the UCP leader has issued an apology.

In a statement posted to Twitter on Tuesday, Smith said she is “reaffirming her condemnation” of the invasion and offered an apology for past comments.

“I categorically condemn the Russian invasion of Ukraine and the indescribable suffering Russia has and still is inflicting on the Ukrainian people,” the premier wrote.

“Prior to re-entering politics earlier this year, I made some ill informed comments on Russia’s invasion of Ukraine. My knowledge and opinion of this matter have drastically evolved since that time, and I apologize for those previous comments.”

Today, I am reaffirming my condemnation of the Russian invasion of Ukraine and offering my full apology for past comments. <a href=”https://t.co/bCpwiRV5Dz”>pic.twitter.com/bCpwiRV5Dz</a>

The past remarks surfaced over the weekend after a freelance journalist published comments Smith made on social media platforms before her ultimately successful bid to become leader of the United Conservative Party and premier.

On a livestream chat on April 29, Smith said: “The only answer for Ukraine is neutrality,” adding she understands why Russia would have a concern with a western-aligned Ukraine armed with nuclear weapons on its doorstep. Ukraine surrendered its nuclear weapons in the 1990s.

In a Feb. 24 post, she said: “I’ve read that two regions of Ukraine feel more affinity to Russia. Should nations be allowed to break away and govern themselves independently? If that’s truly what people want, then I think so. But is that what the people want — or is it propaganda?”

On Monday, Opposition critic Sarah Hoffman said it was “tone deaf” and “cruel” for Smith to urge Ukraine to accept neutrality, even as its people were fighting and dying in the Russian invasion and called for an apology from the premier.

Hoffman responded to Smith’s statement on Tuesday, calling the apology a positive step. However, she said Smith had caused pain to Ukrainian Albertans and damage to the province’s reputation.

Hoffman added that the NDP is looking “forward to what else will be done to address the damage she caused both to Alberta communities, our economy, and our image on the world stage.”

Smith wrote Tuesday that her office is reaching out to Alberta’s Ukrainian community leaders to take steps toward helping refugees settle into communities across Alberta.

“I stand with Ukraine and the Ukrainian people,” she wrote.