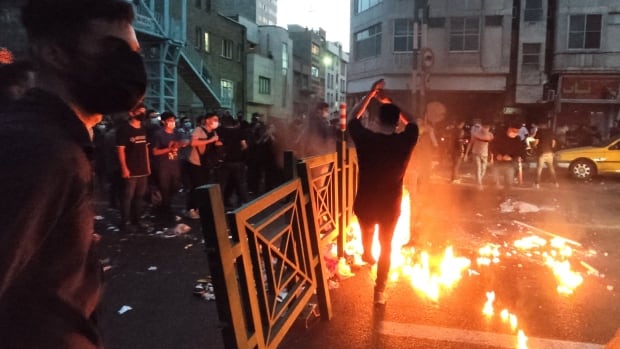 This month, a list was shared with CBC News from inside Iran, of the names of protesters who face execution by regime authorities.

In consultation with multiple activists and by accessing reporting by various human rights groups, CBC News can name 90 individuals detained in Iran as being at high risk.

According to information available, at least 19 have been sentenced to death, 65 could face execution and six have been handed lengthy and uncertain prison terms.

The vast majority of these individuals are accused by the regime of “waging war against God” and “corruption on earth” — crimes punishable by death under the Islamic Republic’s sharia law.

Protests in Iran erupted in September after a young Iranian woman named Mahsa Amini died in police custody. The 22-year-old had been arrested by the regime’s so-called morality police, allegedly for not wearing her hijab properly, part of the regime’s strict Islamic dress code. Her family says she was beaten to death.

Human rights activists tell CBC News the need to identify and publicize the names of the detained protesters is urgent.

They say the attention and public pressure on the authorities in Iran, will help save the lives of many who are voiceless.

Across Europe dozens of politicians have taken on sponsorship of the vast majority of the names listed.

Many parliamentarians and senators in countries like Germany, Austria and France are amplifying the stories of those who have been detained and are lobbying Iranian ambassadors for their release.

Over 18,000 people have so far been detained by the Islamic Republic since the start of the anti-regime protests in September, according to the Human Rights Activists News Agency (HRANA). Of those, 506 had been killed — including 69 children and teenagers — as of Dec. 21, 2022.

In less than a month, Iranian authorities arrested, charged and carried out two known executions of Mohsen Shekari and Majid Reza Rahnavard.

Iranian-Canadian activist Golsa Golestaneh, who focuses on fact-checking and propaganda, says the two men were “executed in silence” because the regime is often able to “distort the truth” by amplifying false charges and convictions of detained prisoners.

Golestaneh is the spokesperson of an advocacy group called Waves (امواج), made up of young Iranians in and outside Iran who want to have a say in the political opposition to the regime.

“It is extremely important to continue emphasizing the unpredictability of the Islamic regime while recognizing the importance of accuracy, to the extent possible, to minimize the chances of another silent murder.”

When it comes to the treatment of unidentified prisoners in Iran, Masoud Kazemi, a journalist based in Turkey, says the regime has a “dark history and horrific track record.”

“Detained protesters who are unidentified are subjected to more torture and suffering than others,” Kazemi said. “And they are also given lengthier prison terms and are sometimes also sentenced with execution.”

Activists caution that executions are just one of the ways the regime kills prisoners. Golestaneh says that even when prisoners in Iran aren’t facing executions, their lives are still at risk.

Kurdish human rights activist Soran Mansournia, who works on identifying prisoners and those killed by the regime, is urging families to come forward and publish the names of their loved ones.

“In the last two months, at least seven people from Iranian Kurdistan died under the torture of security forces of the Islamic Republic,” Mansournia said.

“Many prisoners’ lives are in danger and we don’t even know their names. I ask all their families to make public the abduction of their loved ones.”