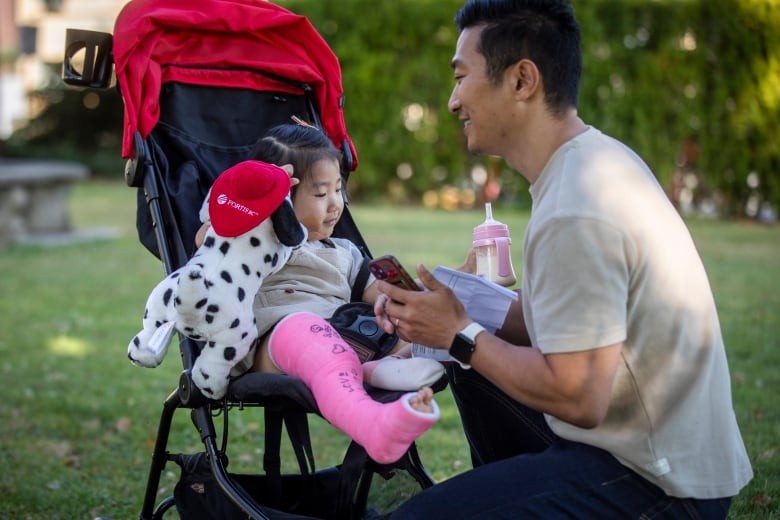 Taryn Lim was looking for ways to entertain herself while she waited for her mother to get ready for a playdate on Monday. The two-year-old girl chose something to play with: the curtains by the third-floor window of their Langley, B.C., townhouse.

She grabbed the fabric, stepped over the baseboard heater, lost her balance and fell out the open window. Her mother, who was in the same room, quickly noticed the toddler had disappeared and looked outside to see her lying on the ground more than six metres below.

Taryn’s father got the call while he was at work.

“There’s nothing I could do. Just pray that there is a miracle,” Sean Lim recalled on Friday.

Taryn was airlifted to B.C. Children’s Hospital. She lost two teeth, broke her leg and cracked her jaw but escaped any injuries to her brain or spine. Her bright pink cast will stay on her leg for six weeks, but the hospital’s pediatric surgeon said she’s otherwise expected to recover.

Sean, who has another four-year-old daughter, shared the family’s story on Friday in an effort to warn other parents about the danger of windows left open without child safety guards in place.

The guards, which can be found at hardware stores for a few dollars, are designed to keep windows from opening more than 10 centimetres so children can’t fit through.

Hospital has treated nearly a dozen children this year

As he spoke Friday, Sean cradled Taryn in his arms. The toddler, hair pulled back in two pigtails, quietly clutched a stuffed Dalmatian with a firefighter’s helmet and only fussed when a fly got too close.

Before the fall, Sean taught both his daughters about staying away from open windows. To drive the message home, he dropped a teddy bear out the window so the girls could see how it fell.

The family’s old condo had window guards installed, but they recently moved to a townhouse and weren’t aware the windows didn’t already have locks in place.

“I used to criticize people who didn’t watch their kids, but this can happen to anybody,” said Sean.

B.C. Children’s Hospital has treated 11 children this year who’ve fallen from open windows. Some, like Taryn, are in and out of hospital quickly. Others will need lifelong care.

“These are often devastating, life-altering injuries, both for the children and their families,” said Dr. Robert Baird, a pediatric surgeon and surgical trauma director at the hospital.

Baird said window guards are easy to find and made for all types of windows. He warned screens are not enough to protect a child — especially “top-heavy” toddlers exploring their surroundings.

“It’s very easy for a child to either burst the screen out or burst right through the screen and fall out.”

Even if a child falls from a height that doesn’t seem dangerously high, Baird said parents should phone 911 if there’s a loss of consciousness or seizure-like symptoms. Baird said anything above one and a half metres is “considered a worrisome fall.”

Taryn was discharged from the hospital earlier this week. She’ll start preschool next month.

After her family brought her home, they bought guards for the windows.

“This is a terrifying incident, and you don’t want to go through the same,” Sean said. “We’re extremely lucky.”