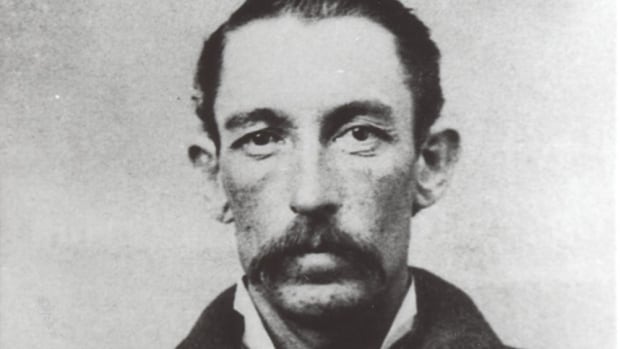 Bill Miner is a legendary name in some parts of B.C. — particularly in the province’s Interior, where the notorious train robber was apprehended by police more than 115 years ago.

His story inspired several books, an award-winning film and even a few songs.

Known as the Grey Fox and the Gentleman Bandit, Miner’s life of crime began in the U.S. in the 1800s. He was known for robbing stagecoaches, which sometimes carried packages on long journeys and was caught and eventually sentenced to 25 years in a California prison in 1881.

When he emerged from prison in 1902, trains had largely replaced stagecoaches. And so, he replaced his typical target with a new one.

According to the federal government, Miner robbed CP Rail trains in B.C. in 1904 and 1906. In the spring of 1906, he was captured near Kamloops, B.C., tried, convicted and given a life sentence at a federal maximum-security prison in New Westminster.

Miner was eventually caught and died in prison.

A feature-length film about the train robber’s exploits was released in 1982, starring Richard Farnsworth in the lead role.

The Grey Fox won seven Genie Awards, honouring the best in Canadian film from 1980 to 2012.

Farnsworth was nominated for a Golden Globe for his role.

“When [director Phillip] Borsos thought of the kind of mythical landscapes of British Columbia and the Canadian West, this figure of Bill Miner emerges … as a folk hero,” said film critic Tom McSorley.

CBC Radio Specials49:01All Aboard: A Journey Across Canada One Train Car at a Time

Canada’s iconic railway spans tens of thousands of kilometers from coast to coast. Steeped in history, the impact of those lines continues to be felt in our lives and our identity. Join host Melody Jacobson and producer Caroline Chan for a program that will go off the tracks to explore the stories of our railway. You’ll meet First Nations reuniting after the railway forced them apart, as well as Chinese Canadians commemorating their ancestors who built the tracks.

He was considered something of a Robin Hood-type. It’s kind of that folk hero mythology that I think surrounds him because it’s like sticking it to the man.”

The film explored how Miner’s switch from robbing stagecoaches to trains illustrated that particular time in technological history.

Canadian folk singer Paul Valdemar Horsdal, known professionally as Valdy, also took an interest in the legend of Bill Miner. He partnered with songwriter Gary Fjellgaard, and within just two days of deciding to write a song honouring Miner, they had one.

“Billy was definitely one of my heroes for sure,” Fjellgaard said. “He just represented freedom.”

The song appeared on a collaborative album by Valdy and Fjellgaard, Contenders Two: Still In The Running.

In 2017, the Kamloops Music Collective commissioned composer Robert Buckley to write a song about Miner for eventual use in teaching music students about both music and local history.

The result was an orchestral number entitled The Legend of Billy Miner.