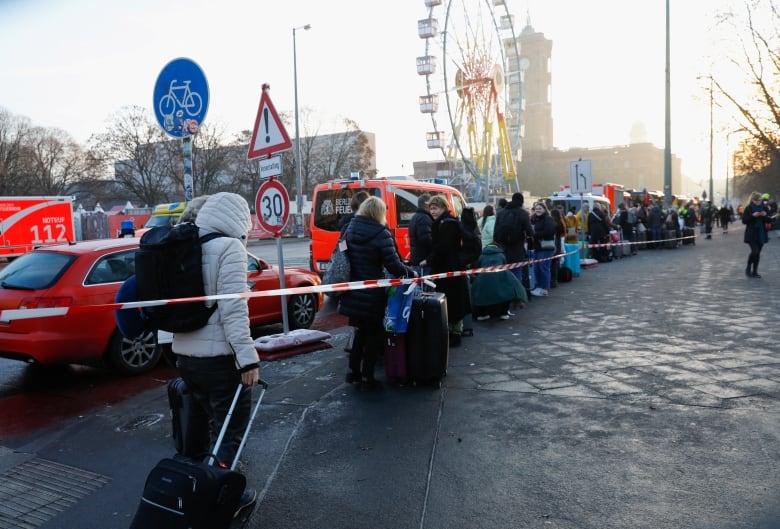 A huge aquarium in Berlin burst on Friday, causing glass, water and hundreds of tropical fish to spill out of the Sea Life tourist attraction in the heart of the German capital.

A wave of debris swept out of the building, which also contains a hotel, cafés and a chocolate store, as one million litres of water poured from the aquarium shortly before 6 a.m, police said.

Berlin’s fire service said two people were slightly injured. Rescue dogs were searching the building for anyone who might be trapped under debris, they said.

The operators of Sea Life say the 25-metre-tall AquaDom was the biggest cylindrical tank in the world and held more than a thousand tropical fish before the incident. Among the 80 types of fish it housed were blue tang and clownfish, the species known from the popular animated movie Finding Nemo.

“We have not yet been able to walk the first floor completely, which is probably where these fish will be,” fire service spokesperson Adrian Wentzel said. “But the thing is that the water has completely leaked out and these about 1,400 fish that were in this aquarium could not be saved either.”

There was speculation freezing temperatures that got down to -10 C overnight caused a crack in the tank, which then exploded under the weight of the water. Police said there was no evidence the incident resulted from an attack.

Sandra Weeser, a German lawmaker who was staying in the hotel, said she was awoken by a large bang and thought there might have been an earthquake.

“There are shards [of glass] everywhere. The furniture, everything has been flooded with water,” she said. “It looks a bit like a war zone.”

The aquarium, which was last modernized in 2020, is a major tourist magnet in Berlin. The 10-minute elevator ride through the tropical tank was one of the highlights of the attraction.

About 300 guests and employees had to be evacuated from the hotel surrounding the aquarium, police said.