Bivalent COVID vaccines are here. What happens to the existing vaccines? 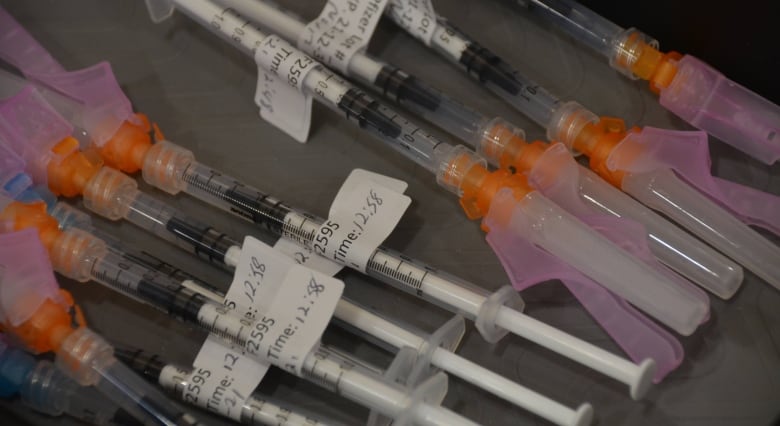 This is an excerpt from Second Opinion, a weekly analysis of health and medical science news. If you haven’t subscribed yet, you can do that by clicking here.

Bivalent vaccines — which target more than one strain of the coronavirus — are making their way into Canada, with Moderna’s COVID-19 vaccine targeting the Omicron variant BA.1 rolling out to the provinces and territories this week.

And that’s just the start. Pfizer-BioNTech have an application in for their BA.4-BA.5 vaccine, with Moderna’s vaccine targeting the same strains expected soon, too.

But with newer, more targeted vaccines rolling out, what will happen to the existing vaccines?

Federal Health Minister Jean-Yves Duclos pledged last week to try and minimize any vaccine wastage as the latest vaccines roll out. Throughout the pandemic, Canada has donated some of its surplus vaccines to other countries, and federal health officials said last week they will continue to donate vaccines as wanted.

But those who have been closely following Canada’s pledges for international vaccine donations say Canada’s record of shipping vaccines to lower-income countries has been slow or too late to their expiry dates. And some experts are concerned this latest stage of vaccine rollout could mean more vaccines are wasted as demand from other countries dwindles.

“It makes sense you’re going to get the latest and new version [of the vaccine], just like if you had the chance to buy a new smartphone,” said Ananya Tina Banerjee, assistant professor in McGill University’s epidemiology, biostatistics and occupational health department.

“I think there’s going to be even more vaccines [now]…wasted.”

What’s our plan for existing vaccines?

The original vaccine will still need to be stocked in Canada. In its latest recommendations, the National Advisory Committee on Immunization (NACI) continues to recommend a primary series with an authorized mRNA vaccine.

There are thousands of Canadians who have yet to get their initial doses. According to federal data, about 86 per cent of Canadians five and older have completed their primary series.

For now, Canada is holding onto the original doses as they are the only ones currently approved for the primary series.

But the federal government has started to make the switch over to new bivalent vaccines. Moderna and the Canadian government recently agreed to convert six million doses of the company’s COVID-19 vaccine, which targets the original virus, to an Omicron-containing bivalent vaccine.

The original vaccine recipe is still needed, said Deepta Bhattacharya, an immunobiology professor at the University of Arizona.

“Does it make sense to have an Omicron only [vaccine]? As a primary series, no, I don’t think so. Because it’s clear that you get generally pretty narrow immunity against Omicron, but not some of the other things that we’ve seen before,” Bhattacharya said.

The federal government earmarked up to $8 billion for COVID-19 vaccines in early 2021, but a spokesperson with the Public Health Agency of Canada (PHAC) did not confirm how much has been spent so far.

“With quite a large supply of vaccines coming onboard in September, that switch will occur throughout this month. It is important to minimize wastage as much as possible. If we don’t need the vaccine, of course not to acquire more of it and to be able to provide it if it’s useful to others,” Canada’s Chief Public Health Officer Dr. Theresa Tam said at the announcement of Moderna’s bivalent vaccine approval.

“But it does mean that some of them less likely won’t be used but we do still have to minimize any potential wastage.”

Throughout the pandemic, Canada has had a national vaccine inventory where it stocked vaccines approved by Health Canada.

The number of vaccines in the national stockpile has shifted throughout the pandemic, with the reserve at some points exceeding the four million dose limit promised by the federal government.

As of Sept. 2, there were more than eight million mRNA vaccines for adults in the federal facility, according to a statement from PHAC.

Vaccine wastage has been a concern since vaccines started rolling out.

On the federal level, as of Wednesday, around 8.9 million vaccines in the federal stockpile have expired and were disposed of, a PHAC spokesperson said. That doesn’t include the number of vaccines that have expired after being distributed to the provinces and territories.

In addition, 13.6 million doses of AstraZeneca bought by Canada “bilaterally and through COVAX” were also disposed of after they expired this spring. COVAX is the global vaccine-sharing initiative.

Those vaccines were part of a federal announcement last year to offer 21.8 million AstraZeneca doses to countries in need, said Natalie Mohamed, a spokesperson for Health Canada and PHAC, in an email.

“However, due to limited demand for the vaccine and distribution and absorption challenges faced by recipient countries, they were not accepted. Canada continues to work with COVAX to help remove barriers to vaccination,” she added.

A group of prominent global health experts have penned an open letter to Prime Minister Justin Trudeau calling on Canada to support improved access to COVID-19 vaccines, tests and treatments.

The problem with vaccine donations

And now, with bivalent vaccines emerging, some advocates say that vaccine donations have never been the solution to meeting global demand.

“The solution here has always been through the production of enough vaccine doses to meet global demand and making those doses available at a fair price,” said Jason Nickerson, humanitarian representative to Canada for Doctors Without Borders.

As of Tuesday, Canada has donated over 50 million surplus vaccines through COVAX and financial contributions that equal about 87 million vaccines, according to the government’s website.

Federal leaders had pledged to donate the equivalent of at least 200 million doses to COVAX before the end of this year.

Nickerson and Banerjee said Canada should have done more earlier in the pandemic to deal with vaccine equity.

“It’s been frustrating overall for us,” said Banerjee. “We’ve just pretty much reached a dead end and all of us can agree that we have absolutely failed at global vaccine equity.”

Nickerson says while vaccine donations were needed earlier in the pandemic, higher-income countries like Canada should have also been putting pressure on pharmaceutical companies to increase production and to transfer vaccine technology to manufacturers ready to make vaccines in lower-income countries.

“The world hasn’t overcome the fundamental problem here, which is that health products like vaccines and therapeutics — particularly during a pandemic — need to be viewed more akin to global public goods if we’re actually going to get serious about tackling this virus and viruses to come in the future as well,” he said.