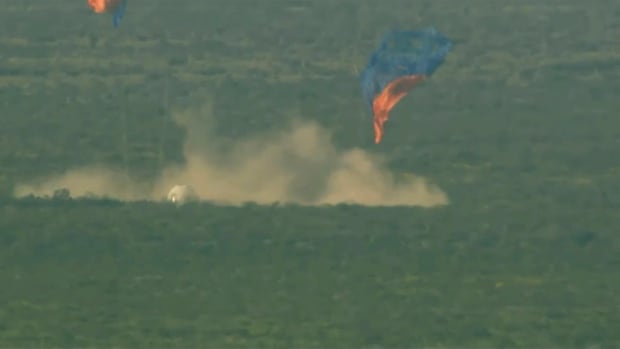 The Blue Origin rocket company, led by Amazon founder Jeff Bezos, suffered its first launch failure Monday. No one was aboard, only science experiments.

The rocket veered off course over West Texas about a minute after liftoff. The capsule’s launch abort system immediately kicked in, lifting the craft off the top. Several minutes later, the capsule parachuted onto the remote desert floor.

The mishap occurred as the rocket was travelling nearly 1,126 km/h at an altitude of about 8,500 metres. There was no video shown of the rocket — only the capsule — after the failure occurred. The rocket usually lands upright on the desert floor and then is recycled for future flights; clearly, that did not happen this time.

Launch commentator Erika Wagner said the capsule managed to escape successfully, with the webcast showing it reaching a maximum altitude of more than 11,300 metres. Thirty-six experiments were on board, half sponsored by NASA.

No further details were provided.

It was the 23rd flight for the New Shepard program, named after the first American in space, Mercury astronaut Alan Shepard. The same kind of rocket and capsule have been used to carry paying passengers on 10-minute rides to the edge of space. It was the ninth flight for this rocket.

Altogether, Blue Origin has carried 31 people to the edge of space.

The company has also spent years developing the New Glenn rocket — named after the late astronaut John Glenn — with hopes for a maiden flight in the near future.

Last week, both Blue Origin and Amazon were named as part of a coalition of space companies that the White House was forming to encourage space industry educational opportunities, with an emphasis on “people from backgrounds traditionally underrepresented in STEM jobs.” Other companies participating include long-standing space industry giants like Boeing and Lockheed Martin as well as Elon Musk’s Space X and Richard Branson’s Virgin Orbit.