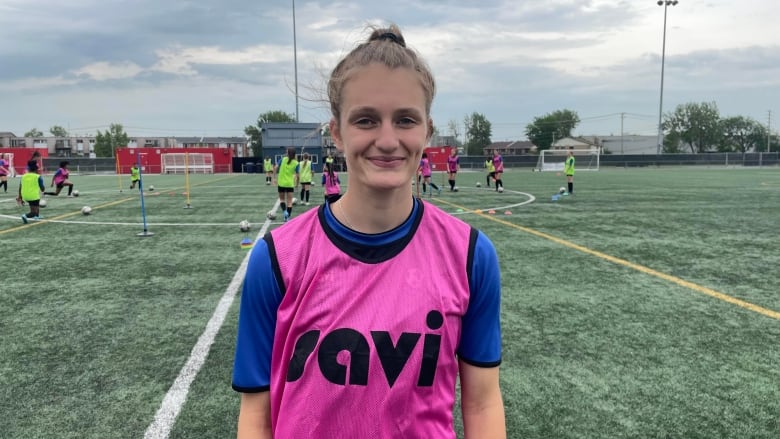 While Canadian soccer fans are focusing on the success of the senior men’s and women’s teams, they can expect to see young Quebec talent coming down the pipeline this month.

Sixteen teams will travel to India for the 7th edition of the U-17 World Cup, featuring some of the best female teenagers on the planet, including four Quebecers.

Coach Emma Humphries says Canada is looking to improve on its fourth place finish in 2018 — the country’s best result in seven appearances at the tournament.

“We’re going out to win every game that’s in front of us,” Humphries said from Goa, India.

Terrebonne’s Jade Bordeleau says pulling on the Canadian kit is an honour.

“It was pretty amazing when you walk in the locker room and you get the jersey with your number and everything,” she said. “It was really special.”

It shouldn’t be surprising to see Jade rising to the top of the talent pool when you consider her family’s athletic roots.

Her grandfather, Paulin Bordeleau, played in the NHL in the 1970s. Her father, Sébastien Bordeleau, played seven years in the league, including parts of three seasons with the Montreal Canadiens. Now, her brother, Thomas Bordeleau, is following suit. He has already played a handful of games with the San Jose Sharks last season. But Jade knew early on that Canada’s national winter sport wasn’t for her.

“My dad asked me when I was young if I wanted to play hockey because, you know, my brother was playing. I never wanted anything to do with it. I did figure skating, but never hockey.”

Canadian soccer fans are thankful Jade chose cleats over skates because she’ll be called on to help carry the squad to a deep run in this tournament. As a striker, she will be asked to step up in the absence of scoring sensation Rosa Maalouf, who is out with an injury. The Ottawa native found the back of the net 12 times to lead all players in the CONCACAF U-17 championship in the Dominican Republic last spring. Canada earned a bronze medal, which assured the team a spot in the World Cup.

Humphries said the team has mixed up its attack in Maalouf’s absence, and a committee of players has been picking up the slack.

“We’ve now played four World Cup opponents and scored five goals [without Rosa,]” Humphries said. “We will absolutely miss her … but this team is more than capable of scoring without her.”

And Humphries likes what she sees in Jade.

“She’s a really exciting player who plays with a huge amount of fight and passion,” said the New Zealander. “She has a real eye for goal.”

Playing at this high level of soccer takes discipline both on and off the pitch. Goalkeeper Coralie Lallier and midfielder Félicia Roy live on Montreal’s South Shore and are too young to drive. Every day after school, they use the BMW method (bus, metro, walk) for the three-hour round trip to their training facility in Laval.

Coralie says the sacrifice is worth it, especially when the payoff is a selection to the national team.

Coralie played scores of minutes in the spring tournament as the team’s number one keeper and Humphries says she’ll be backstopping the team again in India.

Félicia has been dreaming of representing Canada for years but hopes this is just a step in her path to the top. Her goal is to eventually make the senior team and represent Canada in the Olympics while carving out a professional career in Europe.

“She’s a technical midfielder,” said Humphries. “She keeps the game one, two touch when it needs to be and also [has the] bravery to be able to try and beat people through the middle.”

A chance to win

Canada has as good of a chance as any nation to win, but it won’t be easy. The path to victory could likely run through the US, a team that beat Canada 3-0 in the CONCACAF spring — a loss, Félicia says, that still stings.

“The US is our biggest rival in this tournament. We want to play them again and beat them,” said the St-Bruno-de-Montarville teen. “We have to play better as a team because we were a bit lost in the match and played too individually.”

First, Canada will have to get out of its pool, which includes soccer powerhouses Japan and France. Both of those countries have already won a World Cup at this level.

Humphries says Janet, who can play centre-back and full-back, brings a lot of energy to the group and is impressing on the pitch.

“When she joins in with the attack — so much speed, so much determination and she can beat people one-v-one on the inside or outside,” Humphries said.

Janet is thrilled to be representing her country, but she wasn’t too thrilled about the way she found out she made the team. Her father sent her a simple text while she was in class.

“In person would be much better,” she said with a laugh. “I just asked my teacher if I could leave to call him to make sure that it was real.”

When asked why she was on her phone in the middle of class, she wisely declined to comment.

On Oct. 12, Canada will open the tournament against France and play Japan three days later. Canada will finish the group stage against Tanzania, a country making its first U-17 World Cup appearance.

Humphries says Canadian fans should pay attention to this tournament and this generation of soccer talent. She thinks the quality at the forward position in particular is deeper than ever before.

“We want to excite Canada about these individuals that could one day be playing for the senior team,” she said.