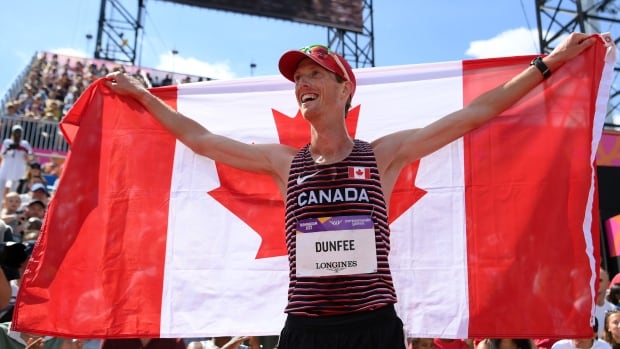 Canada’s Evan Dunfee won the men’s 10-kilometre race walk with a record-setting performance on Sunday for the country’s 23rd gold medal of the Commonwealth Games in Birmingham, England.

The 31-year-old from Richmond, B.C., finished the race in a Games record time of 38:36.37 while also breaking his own Canadian record and setting a new personal best.

A RECORD-BREAKING GOLD FOR CANADA’S EVAN DUNFEE 🇨🇦🥇<br><br>With a time of 38:36.37 in the men’s 10,000m race walk, Dunfee sets a new Commonwealth Games record AND Canadian record to win gold! <a href=”https://t.co/f6IYjDabgY”>pic.twitter.com/f6IYjDabgY</a>

Dunfee won bronze at the Tokyo Olympics last summer in the now-defunct 50km race walk, and he finished sixth in the 35km event at the World Athletics Championships last month.

Canada has also won 29 silver and 33 bronze medals for a total of 85 medals at the Commonwealth Games, which has them third in the standings. The Games conclude on Monday.