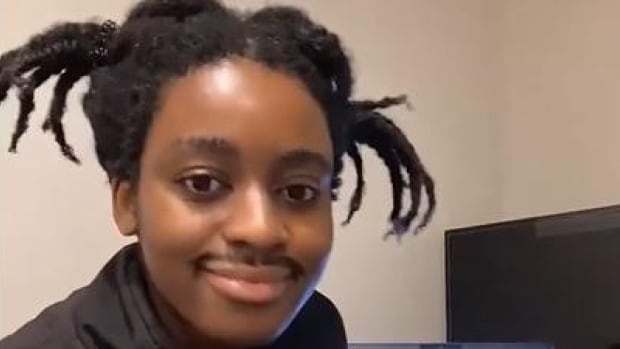 A Toronto woman who went viral on TikTok last week for her 12-hour tribute to the late rapper Coolio, says making such videos is a way to enjoy every moment of life.

Tiana, or UntaintedAfro, as she’s known on TikTok and Youtube, decided to honour Coolio, who died suddenly at age 59 last month, by rapping along to his 1995 hit Gangsta’s Paradise for 12 hours straight. In the TikTok, she wore her hair in a style the rapper made famous in the video for the song featured in the movie Dangerous Minds. Tiana’s video has since received more than eight million views.

The 21-year-old, who did not want to use her last name, told CBC News she’s known for dancing in public, usually in Toronto’s Yonge and Dundas Square, but says she only started recording herself for social media last year.

“I enjoy rapping and singing. So, it’s not that difficult for me to do it for hours on end,” she told CBC News.

WATCH | Tiana went viral for this marathon tribute to Coolio:

Tiana’s route to making social media videos was not the traditional one. It was only after an interaction she says she had with Toronto police that she realized life was too short to not be doing what she loved.

In the summer of 2021, Tiana was looking for a bathroom and wandered into a Toronto grocery store — having no idea that the store was being robbed at the moment she walked in.

“I thought something was going on behind me. And I thought when they jumped on top of me that they were trying to protect me from what’s going on … but they were arresting me. And then they sent me to jail.”

Tiana said she was behind bars for about half an hour when police realized she had nothing to do with the robbery. She said she was let go without charges and doesn’t know if police ever caught the actual suspect.

“It just threw me into a different life path,” she said of the incident.

“After that, I went heavy into YouTube, I started making lots of videos. And it made me realize … ‘What am I doing?’ “

She decided to drop out of university, where she had been bouncing around between different subjects. Instead, she made the decision to focus on creating online content for her own enjoyment.

Initially, Tiana made videos about her natural hair, but slowly branched out into comedic skits and dance challenges. She would break out into dance routines on public transit or dance with strangers on the street.

Tiana soon incorporated music into her TikTok videos. She plays the piano and guitar in a few of her videos and would record herself practicing, as she said uploading the videos motivated her.

“I practice piano and guitar for at least half an hour every day,” she said.

She now has more than 110K followers on TikTok.

Then, she had the idea to do more of what she loved, which was rapping and singing.

She said she was inspired to start making long-form videos by Mr. Beast, a YouTuber who takes on over-the-top challenges like counting to 100,000.

Tiana says she’s able to rap for so long out of sheer willpower.

“I’m in the zone. I just enjoy doing it,” she said. “There’s really not much more to it than that.”

“I posted that I was doing Rap God for 12 hours. My sister was like, ‘I don’t understand your content,’ ” she laughed. Since then, Tiana has covered Doja Cat’s Get Into It (Yuh) and Kodak Black’s Super Gremlin for 12 hours each.

Her content includes other challenges, like dancing to Latin music for three hours, or to Michael Jackson’s biggest hits for four.

She says she sometimes even gets recognized by strangers. “I was at my job and this guy was like, ‘Aren’t you the girl from TikTok? I’m a big fan. Can you do a rap for me?’ “

For now, Tiana’s plans include taking her TikTok fame and her rap videos one day at a time.

She says she wants to “just make sure I’m having fun every single day.”