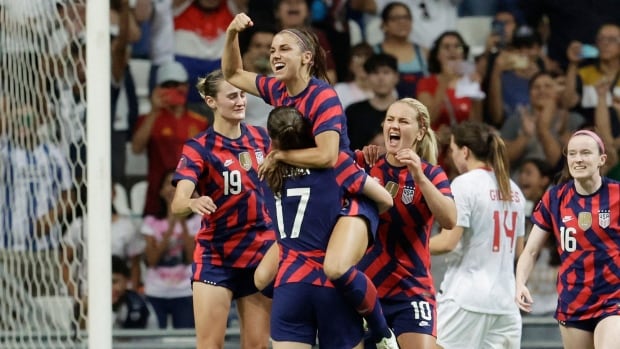 Alex Morgan’s 78th-minute penalty gave the U.S. a 1-0 win over Canada in the CONCACAF W Championship final Monday, sending the Americans to the 2024 Paris Olympics.

The final marked the first meeting between the two North American powers since Aug. 2, 2021, when Canada won 1-0 on a 75th-minute Jessie Fleming penalty in the Tokyo Olympics semifinal. The Canadian women went on to claim gold in a penalty shootout win over Sweden while the Americans settled for bronze after beating Australia.

This time the U.S. got the penalty.

American pressure paid off in the second half when Mexican referee Katia Garcia pointed to the penalty spot after Rose Lavelle went down after contact from substitute Allysha Chapman. Morgan stepped up and beat Kailen Sheridan for her 118th international goal.

As CONCACAF champion, the Americans qualify for both the Olympics and inaugural CONCACAF W Gold Cup, also scheduled for 2024.

Olympic champion Canada can still get to Paris but will have to dispatch No. 51 Jamaica in a CONCACAF Olympic play-in series, scheduled for September 2023, with the winner booking their ticket to the Olympics and Gold Cup. The Canadians blanked Jamaica 3-0 in the CONCACAF semifinal.