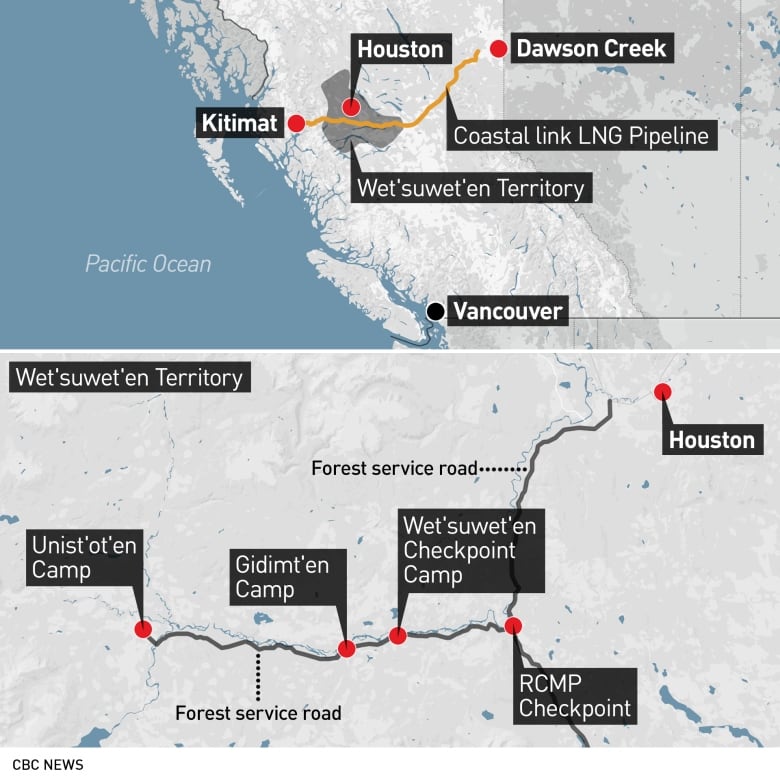 A B.C. Supreme Court judge sentenced five protesters Monday who pleaded guilty to criminal contempt of court for ignoring a court order forbidding them from blocking access to a controversial northern B.C. pipeline.

Justice Michael Tammen accepted a joint submission from the Crown and the lawyer for all five Coastal GasLink opponents, which resulted in a $500 fine for three of the accused and 25 hours of community service for two others.

After laying out the individual details of each of her clients’ lives, defence lawyer Frances Mahon told the judge he should consider the circumstances that drew them to a blockade of the natural gas pipeline in the first place.

A portion of the project is being built across territory to which Mahon said Canada’s top court has acknowledged the Wet’suwet’en have “unextinguished aboriginal rights” — leading their allies to call themselves “land defenders.”

“We are dealing with a unique situation involving people who have had unextinguished title over their land since time immemorial. It is largely that issue that motivated the five individuals before you today,” she said

“This is not to approve what has been done — but to answer the question of why.”

Public defiance of a court’s order

Tammen delivered his verdict Monday afternoon in a courtroom in Smithers, which is 65 kilometres north of the section of forestry road where RCMP arrested the five accused in November 2021.

According to an agreed statement of facts, Amanda Wong, Joshua Goskey, Nina Sylvestor, Layla Staats and Skyler Williams were part of a larger group of protesters who blocked access to the camp where Coastal GasLink employees were building the 670-kilometre-long pipeline.

Coastal GasLink has said that more than 500 pipeline workers were stranded behind the blockades as their food, water, and medical supplies ran low, and construction was halted.

If completed, the pipeline will stretch from near Dawson Creek in the east to Kitimat on the Pacific Ocean. It’s currently more than 75 per cent complete and scheduled to be finished by late 2024, according to Coastal GasLink.

The company has signed benefit agreements with 20 band councils along the project’s route. But Wet’suwet’en hereditary leadership says band councils do not have authority over land beyond reserve boundaries.

The cause has garnered international attention and drawn protesters from across Canada — resulting in the injunction that the five defendants were accused of violating.

Two Wet’suwet’en hereditary chiefs — Woos (Frank Alec) and Namoks (John Risdale) — were in the small Smithers courtroom Monday to watch the proceeding. It was the first time anyone has been convicted of criminal contempt in relation to the protests.

Previous arrests have resulted in citations for civil contempt, but it wasn’t until last spring that the Crown decided to move ahead with criminal proceedings — which arises from public defiance of a court’s order.

As he outlined an agreed statement of facts, Crown prosecutor Tyler Bauman said the protests were accompanied by widely shared social media posts indicating that Coastal GasLink had been “evicted” from the area.

Bauman said the five accused “knowingly breached the injunction … in a public way” by refusing to move after an RCMP officer read them a short script detailing the terms of the court’s order.

The joint submission recommended that Tammen allow each of the defendants to either opt for a fine or community service. Williams, Staats and Sylvestor all chose to pay the fine, while Goskey and Sylvestor opted for service.

Goskey, Wong and Sylvestor were all in the courtroom.

Williams and Staats — who are a couple — appeared through video links from Ontario, where Mahon said Staats is  expecting their first child “any minute now — hopefully not during these court proceedings but very, very soon.”

Only Williams had a previous criminal record — in part for non-violent charges over land conflicts involving the people of his Haudenosaunee community of Six Nations, where he is a leader of the 1492 Land Back movement.

Williams and Staats are both Indigenous; Mahon said Staats is a filmmaker whose work includes a reckoning with the impacts of being an intergenerational survivor of residential schools.

Mahon described Sylvestor as an “enormously principled person” who has dedicated herself to both environmental and Indigenous causes — currently working as a supervisor for a group monitoring invasive plant species in the Kootenays.

The defence lawyer said Wong is from Ontario and is not working at the moment. She said Goskey has held a variety of jobs in recent years, one of which was a stint with Disney on Ice.

She said a close relative believed Goskey “made a poor decision … and was feeling overwhelmed in their life at that time.”

Tammen noted the time all of the defendants spent in custody immediately after their arrests — pointing out that judges often give people a day in jail for criminal contempt, so they experience the “short, sharp shock” that comes with the loss of liberty.

Another 13 protesters are also facing criminal contempt proceedings in relation to the arrests. At previous hearings, Mahon has indicated that they plan to contest the charges on grounds related to alleged breaches of Canada’s Charter of Rights and Freedoms.