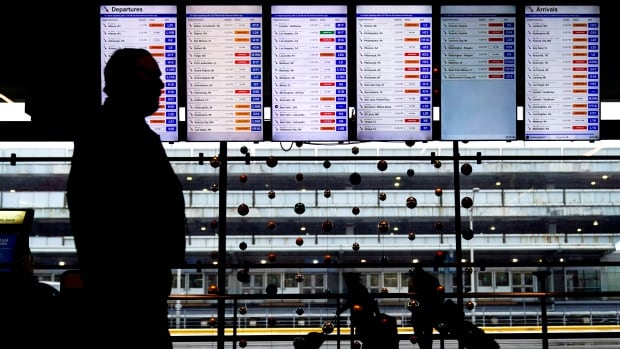 Flights are being delayed at multiple locations across the United States after a computer outage at the Federal Aviation Administration.

Just before 7 a.m. ET, there were nearly 1,200 delayed flights within, into or out of the United States, according to the flight tracking website FlightAware.

Most delays were concentrated along the East Coast, but were beginning to spread west.

The agency said in an initial tweet that it was working on restoring its Notice to Air Missions System (NOTAMs).

“We are performing final validation checks and reloading the system now,” the FAA said. “Operations across the National Airspace System are affected.”

Some departures from Canadian airports delayed

Before commencing a flight, pilots are required to consult NOTAMs, which list potential adverse impacts on flights, from runway construction to the potential for icing. The system used to be telephone-based, with pilots calling dedicated flight service stations for the information, but has now moved online.

There is a potential for widespread disruption because of the outage. All aircraft are required to route through the system, including commercial and military flights.

After the first update, the FAA said about 30 minutes later that “some functions” were beginning to come back on line, without specifying, but that National Airspace System operations remained limited.

Aviation analytics firm Cirium data indicates that over 21,400 flights were scheduled to depart U.S. airports on Wednesday. The carrying capacity of those flights was nearly 2.9 million passengers, though it’s not clear how many tickets were sold.

White House Press Secretary Karine Jean-Pierre said U.S. President Joe Biden was briefed on the situation and had directed the Department of Transportation to investigate. There was no evidence at this point that the outage was caused by a cyberattack, Jean-Pierre said.

U.S. Transportation Secretary Pete Buttigieg said in a tweet that he is in touch with the FAA and monitoring the situation.

Several flights to U.S. destinations on the departure boards of Canadian airports are showing delays of from 30 minutes to over an hour.

Toronto’s Pearson Airport advised travellers with U.S. routes to check their flight status before heading to the airport.