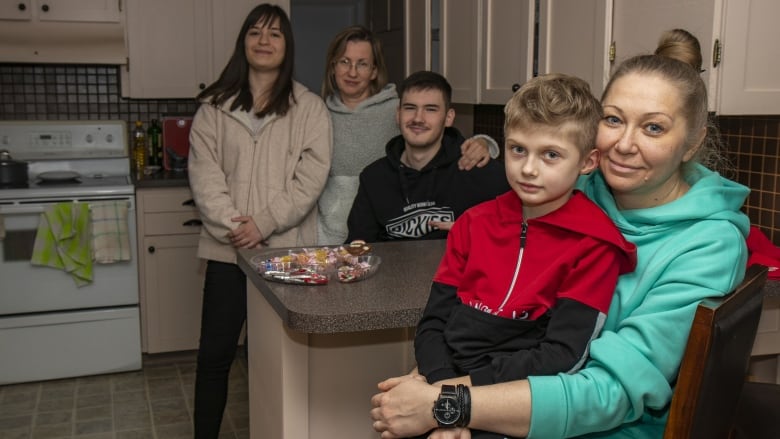 For Ukrainians spending their first holiday season away from home, this year’s Orthodox Christmas celebrations have been muted, focused on prayers that the war in their homeland comes to an end.

Natalia Kohanova and her teenage son Mykhailo Kohanov arrived in Brandon, Man., in mid-June — escaping the Russian invasion that devastated their home city of Irpin and joining the large Ukrainian community in southwest Manitoba.

Their new home has been modestly decorated with Christmas items all donated by the community and friends.

“All decorations on our Christmas tree — it’s all like presents from Canadians. They think about us, they support us and every time think about what we need,” Kohanova said. “It’s so beautiful for us.”

They share the home with three other displaced Ukrainians — 19-year-old student Kateryna Sofishchenko, Hanna Prykhodko and her eight-year-old son Illia.

In Ukraine, Kohanova and her family usually celebrate both Christmas in December and Orthodox Christmas on Jan. 7. But this year they say it is hard to find reasons to feel festive.

“We cannot … celebrate because my parents and [Mykhailo’s] grandma and grandfather right now are in Ukraine,” she said.

“We think about our family,” she said. “I know that [my] parents are shot at every day, and we work so as not to think about it.”

She’s spent her holidays thinking about the war, praying and hoping that the people she loves stay safe.

Sofishchenko, who hails from Kyiv, came to Brandon in August, as late in the year as possible because she wanted to be with her parents, who stayed behind. She’s now attending Assiniboine Community College.

Her family doesn’t celebrate Orthodox Christmas or Christmas, she said, but always hosts a big feast celebrating New Year’s with her grandparents; a highlight of which would be a special traditional dish, kutia, typically served at the start of Orthodox Christmas’s 12-course meals.

Sofishchenko and her housemates had a modest holiday celebration with a smaller meal. They say it can be difficult to plan because it’s tiring adjusting to life in Canada, working and school.

She agrees it would feel strange getting too festive because of the challenging year and ongoing war.

“I’m not really in the Christmas spirit,” Sofishchenko said. “When I think about home it’s quite sad.”

Not being at home for the holidays has been a lonely experience.

Before coming to Canada Sofishchenko spent months in Denmark and Germany, and at times, home has felt like a distant memory. She says, even if she was home, she knows the holiday spirit would be dimmed because of ongoing Russian aggression.

“It would still be pretty stressful, you know all this rocket launches and stuff like that,” she said.

“It’s not home home, because home is a place where you’re safe.”

The Ukrainian-Canadian Congress estimates around 11,000 Ukrainians have settled in Manitoba under emergency travel measures introduced last year. More than 70 have settled in Brandon with help from the Tryzub, a branch of the congress that mainly helps new arrivals.

Kohanova praises Tryzub for its community support and the many events and fundraisers it has held to benefit Ukraine. She says those events are important because Tryzub is helping bring the community together and ensuring people feel connected even though they are outside Ukraine.

“It’s great people because they understand what we’re feeling and so much help to us,” Kohanova said.