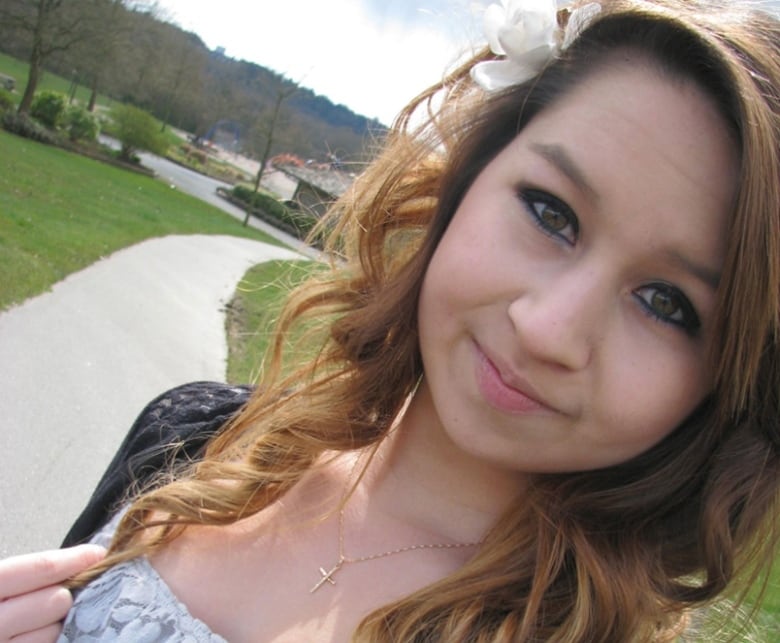 WARNING: This article contains details of sexual extortion and may affect those who have experienced it or know someone affected by it.

Dutch national Aydin Coban has been convicted of extortion, two counts of possession of child pornography, child luring and criminal harassment against Amanda Todd, the B.C. teenager whose story spread around the globe after she died by suicide nearly a decade ago.

A jury delivered the verdict in Supreme Court in New Westminster, B.C., after one day of deliberation.

Todd’s mother, Carol Todd, sat in the back row of the audience gallery Saturday, taking notes. She repositioned herself when Coban returned to the courtroom, within his line of sight.

She reacted strongly as each guilty verdict was read out in court.

Coban, wearing a navy blue button down shirt, showed little emotion as the verdict was read.

Speaking to CBC outside the courtroom, Todd appeared overjoyed, describing the conviction on all counts as a “just” decision — one that came as a relief, many years after losing her daughter.

The verdict comes after seven weeks of testimony involving dozens of witnesses, exhibits and evidence presented by Crown prosecutors prior to the start of closing arguments.

Coban’s defence lawyer did not call any evidence in the trial.

On Friday, B.C. Supreme Court Justice Martha Devlin spent the day instructing the jury they could only find Coban guilty of the charges against him if the Crown had proven its case beyond a reasonable doubt. Otherwise, she said, they must acquit him.

Over the course of several hours, Devlin reviewed testimony and evidence that had been presented to jurors during the the lengthy and complex trial. She guided the jurors through the definition of each criminal count sworn against Coban, explaining to them the criteria the Crown needed to meet in order to convict.

After returning to discuss the next steps to sentencing, Devlin said she spoke to each member of the jury individually and thanked them for their work.

“They asked me to convey their sincere appreciation to both the crown and defence for your professionalism and conduct throughout [the trial],” she said.

Todd died by suicide on Oct. 10, 2012, at the age of 15, after being exploited online over a period of three years. Before she died, she told her story in a nine-minute video posted on YouTube.

The video spread around the world after her death, with 14.8 million views as of August.

Coban, 44, had pleaded not guilty to five criminal charges relating to Todd’s case, including extortion, possession of child pornography and child luring. He was not charged with Todd’s death.

Crown attorney Louise Kenworthy wrapped up her closing her arguments earlier last week, saying there was a “treasure trove of information” linking Coban to the harassment and extortion of Todd.

Earlier in the trial, a Dutch officer testified that a deleted video file called “AmandaTodd.wmv” had been played on one of the devices in December 2010, corresponding with a time when Todd was being actively harassed.

But Coban’s defence argued that sharing a link is “not child pornography.”

The video was sent out as a link, but there was nothing to show it was stored as data on the seized devices, Joseph Saulnier told the jury on the second day of his closing arguments.

The defence lawyer also disputed the Crown’s allegations that Coban was the one behind 22 online accounts that harassed and extorted Todd.

Earlier in the trial, the jury heard from a B.C. RCMP officer who had initially investigated Todd’s harassment allegations in 2011. He said Todd wanted the harassing messages she was receiving to stop.

Todd’s parents went to police when the messages to their daughter continued even after she had changed schools.

Todd’s mother, Carol, has attended every day of Coban’s trial, sitting at the back of the courtroom a few metres from the prisoner’s box. The accused sat with his back to her.

The Crown and Coban’s defence team will reconvene with Justice Devlin on Thursday, Aug. 12 to set a date for a sentencing hearing.

If you or someone you know is struggling with thoughts of suicide, here’s where to get help:

This guide from the Centre for Addiction and Mental Health outlines how to talk about suicide with someone you’re worried about.

Anyone who finds themselves targeted should immediately stop communicating with the suspected scammer and report it to police. Child exploitation can be reported online at www.cybertip.ca.

Police also say victims should not comply with threats, and should keep records of any correspondence with the perpetrator.