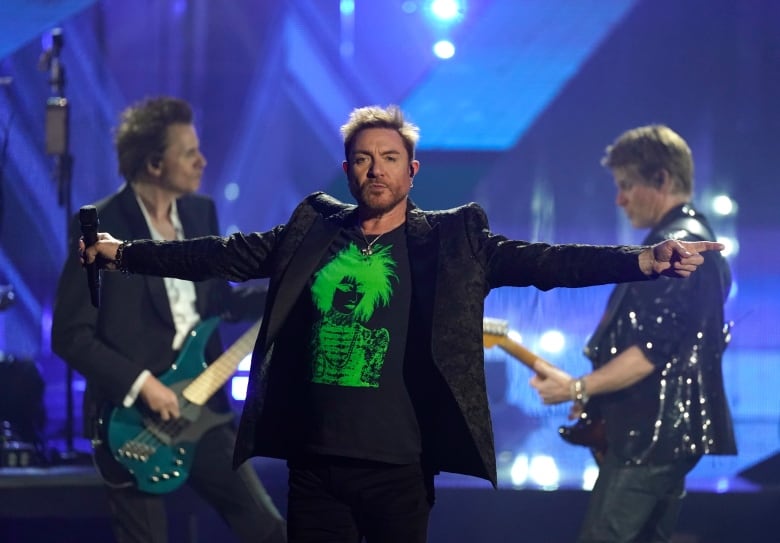 The four acts found very different ways to celebrate on Saturday night, but all can now forever say they’re Rock & Roll Hall of Famers. So are Carly Simon, Eurythmics, Harry Belafonte, Judas Priest and Dolly Parton, who gave the honour an enthusiastic embrace after temporarily turning it down.

The first act inducted at the Microsoft Theater in Los Angeles after a memorable speech from a shaven-headed Robert Downey Jr., Duran Duran took the stage and launched into their 1981 breakthrough hit Girls on Film.

The shrieking crowd was there for it, but the music wasn’t. The band was all but inaudible other than singer Simon Le Bon, whose vocals were essentially a capella.

It was a fun if inauspicious beginning to a mostly slick and often triumphant show.

“The wonderful spontaneous world of rock ‘n’ roll!” the 64-year-old Le Bon shouted as the band stopped for a do-over.

They kicked back in at full volume, playing a set that included Hungry Like the Wolf and Ordinary World, quickly snapping back into what Downey called their essential quality: “CSF — cool, sophisticated fun.”

Lionel Richie brought both chill and warmth to the room hours later, opening his set with a spare rendition of his ballad Hello that seemed to make him nearly break down from the weight of the moment.

“His songs are the soundtrack of my life, your life, everyone’s life,” Lenny Kravitz said in inducting Richie.

After Hello, Richie breezed into his 1977 hit with the Commodores, Easy. The vibe went from smooth to triumphant when Foo Fighters front man Dave Grohl made a surprise appearance to play a guitar solo and swap vocals with Richie. That led into a singalong, celebratory rendition of 1983’s All Night Long that brought the night’s biggest reaction.

In his acceptance speech, Richie lashed out at those during his career who accused him of straying too far from his Black roots.

“Rock & Roll is not a colour,” he said. “It is a feeling. It is a vibe. And if we let that vibe come through, this room will grow and grow and grow.”

Eurythmics took the stage next with a soulful, danceable rendition of 1986’s Missionary Man.

“Well I was born an original sinner, I was born from original sin,” singer Annie Lennox belted, bringing the audience clapping and to its feet four hours into the show. It was followed by a rousing rendition of their best-known hit, Sweet Dreams.

Moments later her musical partner, Dave Stewart, called Lennox “one of the greatest performers, singers and songwriters of all time.”

“Thank you, Dave, for this great adventure,” a tearful Lennox said.

As he has been throughout his career, Eminem was the outlier. He was the only hip-hop artist among the inductees, the only one whose heyday came after the 1980s, and he brought an edge to the evening that was otherwise missing outside of the heavy metal stylings of Judas Priest.

He also took the guest star game to another level. After opening briefly with 1999’s My Name Is, he brought on Aerosmith’s Steven Tyler to sing the chorus of Dream On for 2003’s Sing for the Moment, which samples the Aerosmith classic. Then he brought on Ed Sheeran to sing his part on the 2017 Eminem jam River as rain fell on the stage.

“I’m probably not supposed to actually be here tonight for a couple of reasons,” Eminem, wearing a black hoodie, said as he accepted the honour. “One, I know, is that I’m a rapper and this is the Rock & Roll Hall of Fame.”

He’s only the 10th hip-hop artist among well over 300 members of the Hall of Fame.

He was inducted by his producer and mentor Dr. Dre, whom he credited with saving his life.

But hitmakers of the 1980s defined the night.

“Pat always reached into the deepest part of herself and came roaring out of the speakers,” Sheryl Crowe said in her speech inducting Benatar.

Benatar, inducted along with her longtime musical partner and husband Neil Giraldo, took the stage with him and displayed that power moments later.

“We are young!” the 69-year-old sang, her long, grey hair flowing as she soared through a version of 1983’s Love is a Battlefield.

Inductees absent from the ceremony included Duran Duran guitarist Andy Taylor, who is four years into a fight with advanced prostate cancer, the 95-year-old Belafonte and Carly Simon, who lost sisters Joanna Simon and Lucy Simon, both also singers, to cancer on back-to-back days last month.

Carly Simon was a first-time nominee this year more than 25 years after becoming eligible. Olivia Rodrigo, 60 years Simon’s junior and by far the youngest performer of the night, then took the stage to sing Simon’s signature song, You’re So Vain.

Janet Jackson appeared in a black suit with a massive pile of hair atop her head, remaking the cover of her breakthrough album Control, as she inducted the two men who made that and many other records with her, writer-producers Jimmy Jam and Terry Lewis.

When the nominees were announced in May, Parton “respectfully” declined, saying it didn’t seem suitable for her to take a spot as a country-to-the-core artist. She was convinced otherwise, and ended up the headliner Saturday night.

“I’m a rock star now!” she shouted as she accepted the honour. “This is a very, very, very special night.”

Parton said she would have to retroactively earn her spot.

She disappeared and emerged moments later decked out in black leather with an electric guitar and broke into a song she wrote just for the occasion.

She closed the night leading an all-star jam of her fellow inductees on her country classic Jolene. Le Bon, Benatar and even Judas Priest singer Rob Halford took a verse.

“We got a star-studded stage up here,” Parton said. “I feel like a hillbilly in the city.”