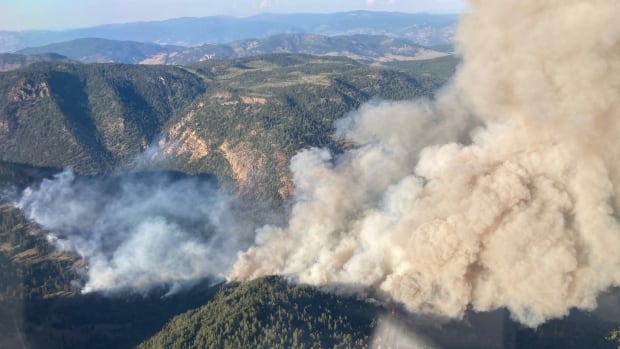 Residents of 21 properties near a wildfire southwest of Penticton, B.C. have been ordered to evacuate.

The Regional District of Okanagan-Similkameen issued the order on Friday night around 9:30 p.m.

It is in effect for residents on the Green Mountain Road, near Ford Lake.

The district says 21 properties fall under the evacuation order, which is being overseen by the RCMP.

“An Evacuation Order has been issued … to protect the health, safety or welfare of a person or to limit damage to property,” the district said in its order.

The Keremeos Creek fire, which started earlier Friday, is now one square kilometre in size as of 10 p.m.

The cause of this wildfire is currently under investigation, according to B.C.’s Wildfire Service.

The blaze is being fought by 10 personnel with the provincial agency, including two helicopters. More firefighters are en route, the province said Friday night.

“This wildfire is located in terrain that is inoperable for air tanker and heavy machinery support at this time,” the agency added.