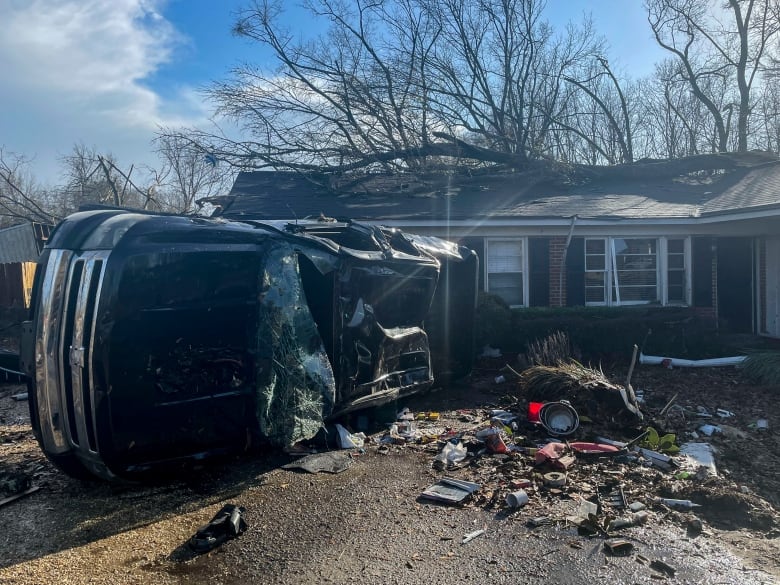 A giant, swirling storm system billowing across the southern U.S. killed at least six people and spawned a tornado on Thursday that shredded the walls of homes, toppled roofs and uprooted trees in Selma, Ala., a city etched in the history of the civil rights movement.

Brick buildings collapsed, cars were on their side and traffic poles were strewn about in the downtown area. Plumes of thick, black smoke rose over the city from a fire. It was not immediately known whether the storm caused the fire.

The “large and extremely dangerous tornado” caused damage as it moved through the historic city, the National Weather Service said.

Selma Mayor James Perkins said first responders are continuing to assess the damage in his city.

“We have a lot of downed power lines. There is a lot of danger on the streets,” he said.

A few blocks past the city’s famed Edmund Pettus Bridge, an enduring symbol of the voting rights movement, buildings were crumpled by the storm and trees blocked roadways.

Selma, a city of about 18,000 residents, is about 80 kilometres west of the Alabama capital of Montgomery.

The outer siding of a two-storey building was shredded by the storm, photos from The Selma Times-Journal showed. Huge pieces of insulation and metal were wrapped around the trunk of a tree, and fallen tree branches obscured a sign proclaiming “WELCOME TO HISTORIC SELMA.”

“It seems to have been a couple of different houses where people were at home,” he said.

Malesha McVay drove parallel to the tornado with her family. She says it got less than two kilometres from her home before suddenly turning.

She took video of the giant twister, which would turn black as it swept away home after home.

“It would hit a house and black smoke would swirl up,” McVay said. “It was very terrifying.”

WATCH | A funnel cloud is spotted a short distance from Selma:

A funnel cloud is seen north of Prattville, Ala., Thursday. The U.S. National Weather Service described a tornado that ripped through nearby Selma as ‘large and extremely dangerous.’

Selma was a flashpoint of the civil rights movement in the 1960s. Alabama state troopers viciously attacked Black people advocating for voting rights as they marched across the Edmund Pettus Bridge on March 7, 1965. Among those beaten by law enforcement officers was John Lewis, whose skull was fractured. He went on to a long and distinguished career as a U.S. congressman.

More than 50,000 customers were without power in Alabama, according to PowerOutage.us, which tracks outages nationwide.

Nationwide, there were 33 separate tornado reports Thursday from the National Weather Service as of Thursday evening, with a handful of tornado warnings still in effect in Georgia, South Carolina and North Carolina. However, the reports were not yet confirmed and some of them could later be classified as wind damage after assessments are done in coming days.

The weather service had issued a tornado emergency for several counties just north of Montgomery as the same storm system moved east.

“This is a life-threatening situation. Take shelter immediately,” the Weather Service said of the reported tornado.

There were multiple tornado warnings issued Thursday in Alabama, Mississippi and Tennessee as the storm system moved through the region.

In Kentucky, the National Weather Service in Louisville confirmed that an EF-1 tornado struck Mercer County and said crews were surveying damage in a handful of other counties.

There were reports of downed trees, power outages and other scattered damage from storms that moved through the state.