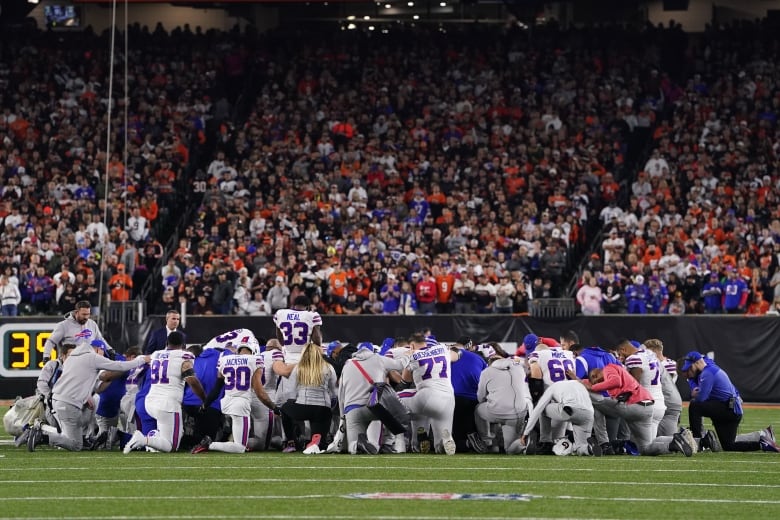 The family of Damar Hamlin expressed gratitude for the outpouring of support shown toward the Buffalo Bills safety while asking everyone to keep the hospitalized player in their prayers on Tuesday.

“We are deeply moved by the prayers, kind words and donations from fans around the country,” Hamlin’s family wrote in a message posted on the Twitter account of the player’s marketing representative, Jordon Rooney. “Your generosity and compassion has meant the world to us.”

The family also thanked the first responders, medical staff at UC Medical Center, the Bills and Cincinnati Bengals for their support.

The 24-year-old Hamlin remained in critical condition a day after the Bills said his heart stopped while making a tackle in the opening quarter of a game against the Bengals that was later postponed. The NFL has informed the teams the game will not be resumed this week while the Week 18 schedule remains unchanged.

The league has made no decision regarding the possible resumption of the pivotal contest at a later date.

Medical staff restored Hamlin’s heartbeat during frantic moments on the field before he was loaded into an ambulance, with teary-eyed players and coaches on both teams having difficulty hiding their shock and emotions.

“First and foremost, the Bengals continue to send thoughts and prayers to Damar Hamlin and his family. Our hearts are with everyone in this unprecedented time — what we can do is support one another,” Bengals president Mike Brown said in a statement released by the team.

“As medical personnel undertook extraordinary measures, both teams demonstrated respect and compassion while fans in the stadium and people around the country bolstered the support for Damar and love for each other. The Bengals are thankful for the love and compassion shown by all. Praying for Damar.”

Got a lot of respect and love for him as a human being, his commitment to the pursuit of his goals and dreams …— Steelers head coach Mike Tomlin on Damar Hamlin

As the second-year Bills player lay sedated in a hospital bed with his family by his side, Hamlin’s competitive and giving spirit has not been lost on those who know him.

“All I can say is he’s fighting; he’s a fighter,” Jordon Rooney, a family representative who described himself as a good friend of Hamlin, told ABC’s “Good Morning America” on Tuesday.

“Got a lot of respect and love for him as a human being, his commitment to the pursuit of his goals and dreams of doing what it is he’s doing right now, which is playing in the NFL,” added Pittsburgh Steelers head coach Mike Tomlin, who has known Hamlin since he was 12. “To watch him make personal decisions and make that a realization, it’s just an honour to get to know young people like that. Had an opportunity to express that to him whenever I’ve seen him.”

“Demar Hamlin is a kind caring extremely hard worker. He is loyal honest and can always put a smile on your face,” Bills offensive lineman Rodger Saffold wrote in a Twitter post. “He is more than an athlete, he is a son and brother. I pray God gives him mercy and brings him back to us.”

On the play Hamlin was injured, Higgins led with his right shoulder, which hit the defensive back in the chest.

Hamlin then wrapped his arms around Higgins’ shoulders and helmet to drag him down. Hamlin quickly got to his feet, appeared to adjust his face mask with his right hand, and then fell backward about three seconds later and lay motionless.

Our thoughts and prayers are with Damar Hamlin and his family. <a href=”https://t.co/eKkc5GfkPz”>pic.twitter.com/eKkc5GfkPz</a>

Hamlin was taken by ambulance to University of Cincinnati Medical Center, where teammate Stefon Diggs later joined him.

About 100 Bills fans and a few Bengals fans gathered on a corner one block from the emergency room entrance, some of them holding candles.

Jeff Miller, an NFL executive vice-president, told reporters on a conference call early Tuesday the league had made no plans at this time to play the game, adding Hamlin’s health was the main focus.

NFL executive Troy Vincent, a six-time Pro Bowl cornerback during his career, said in the conference call early Tuesday morning. “Immediately, my player hat went on, like, how do you resume playing after seeing a traumatic event in front of you?”

Vincent said the league took no steps toward restarting the game and did not ask players to begin a five-minute warmup period as ESPN’s broadcasters had announced.

“It never crossed our mind to talk about warming up to resume play,” Vincent said. “That’s ridiculous. That’s insensitive. That’s not a place we should ever be in.”

Vincent said the Bills were returning early Tuesday morning to the team facility in Orchard Park, N.Y., with the exception of a few players who stayed behind with Hamlin.

The Bengals led 7-3 in the first quarter of a game between teams vying for the top playoff seed in the AFC. Cincinnati entered at 11-4 and leading the AFC North by one game over Baltimore, while AFC East champion Buffalo was 12-3.

Numerous NFL teams canceled their media availabilities on Tuesday, including the New England Patriots, who are scheduled to travel to Buffalo for both teams’ season finales on Sunday. The NFL’s schedule is now in flux after the game between Buffalo (12-3) and Cincinnati (11-3) — a showdown with AFC playoff race implications — was postponed indefinitely.

It’s unclear how the league will juggle its schedule to accommodate the Bills and Bengals. Both playoff-bound teams are supposed to play two games, including Monday night’s, before the post-season is set to open Jan. 14.