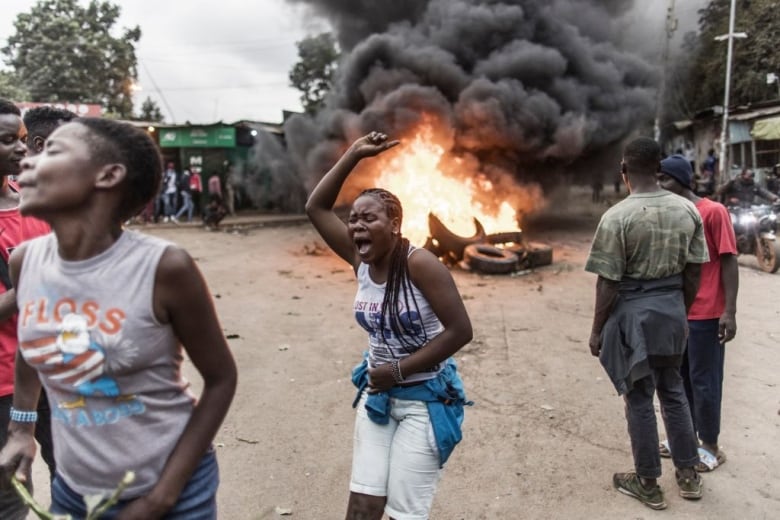 Good morning! This is our daily news roundup with everything you need to know in one concise read. Sign up here to get this delivered to your inbox every morning.

A historic climate bill just passed by the U.S. Congress could have implications in entrenching Canada’s role in the shift toward clean transportation.

Less noticed in the bill was a pot of money containing hundreds of millions of dollars to jump-start a new domestic industry in components for electric-vehicle batteries. The ripple-effects could eventually be felt across the border, up into remote Canadian mining communities.

At issue is growing U.S. concern about becoming dependent on its great geopolitical rival, China, for the critical minerals powering future vehicles.

He’s now getting the funds to do it: $500 million US set aside in this incoming law, after another $600 million was tucked into a recent Ukraine assistance bill, atop an older multibillion-dollar loans program. Those funds are now at Biden’s disposal to enact his stated plan to develop new suppliers for lithium, nickel, cobalt, graphite, and manganese, as well as heat pumps.

Could some of that money create new battery-component projects in Canada? Canadian officials are hopeful it will.

They point to a document recently posted on the White House website, from a binational panel: It explicitly mentions Canada being included as a domestic source under the U.S. Defense Production Act and says that creates potential co-operation opportunities on critical minerals.

“There is an opportunity the way [the bill is] structured — to take advantage of some of that,” Kirsten Hillman, Canada’s ambassador to Washington, told CBC News. “This will spur domestic production [in the U.S.]. It also includes Canada as a domestic source. So we look forward to shared opportunities.” Read the full story here.

Supporters of Kenyan presidential candidate Raila Odinga demonstrate on Monday over burning tires in Kibera, Nairobi, after Deputy President William Ruto was announced as the country’s president-elect. The head of Kenya’s election body declared Ruto the winner of the country’s close-fought vote despite several commissioners rejecting the results. Read more on this story here.

A Mountie who was fired after he showed a revealing photo of himself to an assault victim and exchanged sexual texts with her during an investigation fought successfully to get his job back by arguing he was denied a proper hearing. An adjudicator pointed to flaws in the way the case against Const. Andrew Scott Hedderson played out, reinstated him and awarded him back pay, according to a decision recently made public and posted on the RCMP’s website. The adjudicator also ordered a second hearing but Hedderson had since resigned from the force. Read the full story here.

As rent prices spiked over the past two months, affordable pockets of rental housing became harder and harder to find. In July, the average monthly cost for rental properties across Canada was $1,934 — up 10.4 per cent over last year, according to the data of the property listing company Rentals.ca. A similar hike in June saw the average rent spike 9.5 per cent. Analysts say the steep prices are being driven by more demand than inventory. And that demand is being driven in part by some people fleeing larger cities, while others flock to them. Ben Myers, president of Bullpen Research and Consulting, a real estate advisory firm that tracks rental pricing in Canada, says if you are looking for a deal there still are some places he’d describe as comparatively “cheap.” He suggests looking at Red Deer or Lethbridge in Alberta, or Saskatoon. “You can get a two-bedroom for under $1,150 a month. It’s all about where you can work,” said Myers. Read more on this story here.

Supporters of former U.S. president Donald Trump are widely expected to deliver a final punishment to Rep. Liz Cheney during Tuesday’s Republican primary in Wyoming — a state where nearly 70 per cent of voters cast a ballot for Trump in 2020, his strongest victory in his failed re-election bid. Despite being the incumbent candidate, a staunch conservative and a member of a political dynasty, Cheney is trailing her opponent by nearly 30 points, according to a poll from the University of Wyoming taken 10 days ago. Cheney has become the face of Republican defiance — first for voting to impeach the former president in the wake of the deadly Jan. 6 attack, and then for serving as the co-chair of the congressional committee investigating efforts to overturn the 2020 election. The candidate expected to defeat Cheney is Harriet Hageman, a Trump-endorsed lawyer and former Republican National Committee member who has repeated the lie that the 2020 election was stolen. Read more on this story from CBC’s Katie Simpson.

WATCH | After challenging Trump, Liz Cheney fights to keep her seat in Congress:

After challenging Trump, Liz Cheney fights to keep her seat in Congress

Veteran news anchor Lisa LaFlamme says she was “blindsided” as Bell Media ended her contract at CTV National News after more than 30 years, a “business decision” it says will move the chief news anchor role in “a different direction.” LaFlamme announced the change in a Twitter video and subsequent news release, both posted on Monday. In the video, LaFlamme said she was “shocked and saddened,” by the decision, which she learned of on June 29.  “At 58, I still thought I had a lot more time to tell more of the stories that impact our daily lives,” LaFlamme said in the video. CTV said the decision to end LaFlamme’s contract was due to “changing viewer habits” and that national affairs correspondent Omar Sachedina, who joined the network in 2009, will take LaFlamme’s place as chief anchor. Read more on this story here.

New Mexico’s Office of the Medical Investigator determined that the fatal film-set shooting of a cinematographer by actor Alec Baldwin was accidental. The finding followed the completion of an autopsy and a review of law enforcement reports. The medical investigator’s report was made public Monday by the Santa Fe County Sheriff’s Office. On Oct. 21, 2021, on the set of the Western film Rust, Baldwin was pointing a gun at cinematographer Halyna Hutchins when it went off, killing Hutchins and wounding the director, Joel Souza. Baldwin’s legal team suggested the report was further proof that the shooting was “a tragic accident” and that he should not face criminal charges. Prosecutors have not decided yet if the actor will be charged. Read more on this story here.

Now here’s some good news to start your Tuesday: A Manitoba farmer is continuing his tradition of helping people take the ultimate sunflower-themed selfies — while also raising money to stamp out hunger and defuse a thorny problem some producers face from picture-hunting trespassers. Dean Toews, who farms just outside of MacGregor, Man., has again planted a large field of sunflowers in hopes of attracting Instagrammers to come, snap pics and make a voluntary donation to the Canadian Foodgrains Bank. Toews is the chair of Feed Other Countries Undo Starvation, or FOCUS. His family’s farm, two others in the area and five Hutterite colonies volunteer to grow food for the organization in benefit of the foodgrains bank. Local suppliers also help with donations of fertilizer and chemicals. Read more on this story here.

WATCH | Farmer invites people to take sunflower selfies for a good cause:

Farmer invites people to take sunflower selfies for a good cause

The outgoing premier isn’t the right person to criticize a would-be successor’s proposal, even if his message is right, says Duane Bratt, a political scientist at Mount Royal University in Calgary. Read the column here.

First Person: After years of being Jennifer for others, I’m embracing my Korean name for me

Taking back her birth name means Yeon Soo Ha must sometimes deal with misspellings, mispronunciations or even just being overlooked. But it has also meant reclaiming her sense of self and deciding not to make decisions for the convenience of others. Read the column here.

Rents are on the rise in Canada, making it harder for tenants to find a place that fits their budget.

The Canada Mortgage and Housing Corporation’s definition of “affordable” housing is a place that costs less than 30 per cent of your household’s income. But in Vancouver, where the average monthly rent for a two-bedroom is now $3,597 — you’d have to earn more than $150,000 for that rent to be affordable. In Toronto, your household would have to make more than $135,000.

On today’s episode of Front Burner, Andy Yan, director of the City Program at Simon Fraser University in B.C., breaks down what’s happening with rents and what could be done to help make them more affordable.

1812: British forces under General Isaac Brock, along with Indigenous warriors, capture Detroit during the War of 1812.
1858: The first message over the transatlantic telegraph cable is sent by Queen Victoria to U.S. President James Buchanan via Newfoundland.
1977: Elvis Presley is found dead at his Graceland mansion in Memphis, Tenn. He was 42.

2009: Usain Bolt runs the 100 metres in a world record 9.58 seconds at the world track and field championships in Berlin, obliterating the previous record of 9.69 he set in 2008. It was the biggest change in the record since electronic time was introduced in 1968.