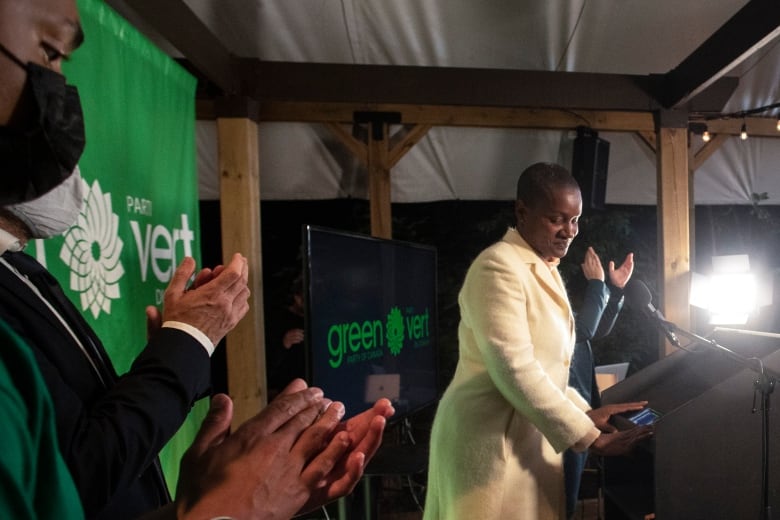 Candidates running to become the next leader of the federal Green Party attempted to convince members that they are the best option to revitalize the party after a tumultuous few years marked by internal conflict and infighting.

The first half of the Wednesday evening debate — which was held over Zoom — allowed for little one-on-one confrontation as candidates were given equal time to respond to a list of questions.

But they were offered the option to dispute what other candidates had said in their answers, which led to some back and forth — especially on the topic of the party’s relevancy.

Former Green leader and current MP Elizabeth May, who is running on a dual-candidate slate with Jonathan Pedneault, said that having a leader in Parliament is the best way to give the party relevancy again.

“The longer we go on without a leader who’s in Parliament, we do become less relevant and we need to be relevant immediately,” she said.

But Anna Keenan and Chad Walcott, also running for co-leadership, suggested they can work with the party’s sitting MPs to push issues in Parliament.

May “is going to be in Parliament anyway, regardless of who wins the leadership,” Keenan said.

“We are committed to work extremely well with her… should we win the leadership.”

Keenan pointed out that May’s running mate, Pednault, is a political newcomer and questioned his ability to run an election campaign. Both Keenan and Walcott have previously run as Green candidates in local ridings.

“I think electoral experience really matters and I would love to see [Pednault] run and see what it takes to succeed in an election,” Keenan said.

But Pednault responded that he has experience from running in the leadership campaign and questioned Keenan and Walcott on how they would lead from outside Parliament.

“Leading the party does require having an ability to engage with the prime minister, with the other party leaders,” Pednault said.

Walcott said the party has MPs it can rely on for parliamentary discussions and can rely on the leaders to raise issues externally.

“We believe in diversity of tactics, we need pressure inside and out,” Walcott said.

Baron said the party needs to focus on being a grassroots organization, give more power to local electoral district associations, and make herself and her leadership team available for weekly policy talks.

“Two egos, two leaders at the top does not, magically, a grassroots organization make,” she said.

Gnocchini-Messier said he joined the party after becoming disillusioned with the NDP and wanted to present the Greens as a left-leaning alternative to his former party, which he accused of too often supporting the Liberals.

“To be relevant in the next federal election we should run on a crystal-clear platform of green-social democracy,” he said.

Both slates of co-leadership candidates also tried to present themselves as better fundraisers. The latest Elections Canada data shows that, while May and Pednault have raised the most money, Keenan and Walcott have more individual donors.

The candidates were also forced to address the departure of former leader Annamie Paul, who terminated her party membership when she stepped down.

During her news conference following the 2021 federal election, Paul described her time as leader as “the worst period in my life” in many respects.

Some party members had been critical of Paul’s leadership style and blamed her for MP Jenica Atwin’s defection to the Liberals earlier that year. At the time, Paul said accusations against her were driven by racism and sexism.

While most of the current candidates said they didn’t necessarily agree with Paul’s leadership style, they all committed to internal reform to ensure the party is a welcoming space.

It was the leadership campaign’s only official English-language debate.

Party members will vote for their new leader online and by mail. The Greens will announce the winner on Nov. 19.