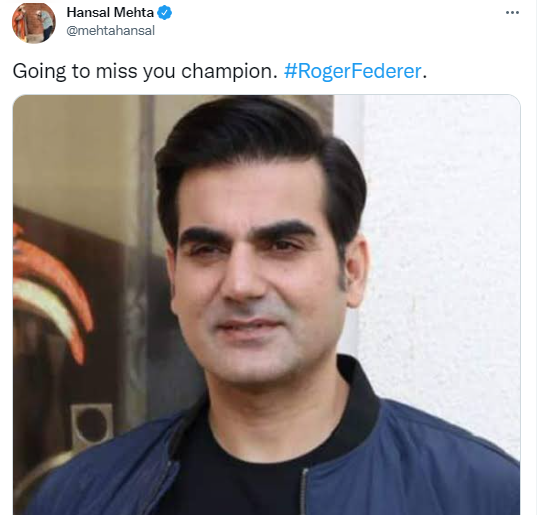 Fans across the world have been sharing messages and posts on social media for Tennis star Roger Federer as he announced his retirement on Thursday.

Bollywood director Hansal Mehta too shared a post for the ace player only, he used Arbaaz Khan’s photo for the post. He captioned it, ‘Going to miss you champion. #RogerFederer.’

Many times in the past netizens have often found resemblances in the appearance of Roger and Arbaaz, and some have even said that Arbaaz looks like Roger’s doppelganger. As soon as Mehta Tweeted, netizens were in on it and it even received a thumbs up from his fans.

While one follower wrote, ‘Best tweet on Federer’s retirement,’ another one added, “Hahahahaha brilliant sir’. One follower even went on to add, ‘hopefully you won’t miss Federer’s acting.’

Earlier, during an interview with a news portal, Arbaaz had reportedly acknowledged the similarities in their looks. The actor wondered if the Tennis star was also aware of it. He stated that he is a huge Federer fan and would love to meet him in person. Arbaaz had come to know that Roger has a house in Dubai and when he plays the Dubai Open, he stays there. The actor added that he will try and meet him during that time.