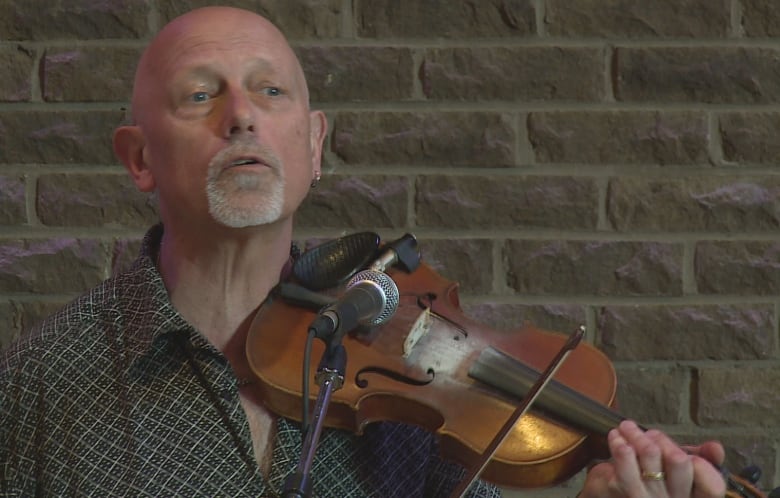 Heave Away, me jollies, Heave Away

Enthusiastic hockey fans belted out those lyrics every time Team Canada scored a goal at the 2023 World Junior Hockey Championships in Halifax and Moncton in December and January.

Since Team Canada’s victory at the 2023 Championships, Heave Away, a high energy song performed by Newfoundland and Labrador trad-rock band The Fables, has been elevated to hockey anthem status.

“It’s simple, it’s like We Will Rock You,” says Kelly Russell, a veteran folk musician in Newfoundland and Labrador.

“It has an anthem-like quality to it that’s easily sung by people who want to appreciate it,” said Russell.

A song of the sea

Traditional folk singer and folklorist Anita Best said the song is likely of English origin, and dates back to a time before hockey was invented, the time of sailing ships.

“There have been hundreds and hundreds of versions of that shanty, everywhere where people speak English — Australia, New Zealand, Ireland, England, everywhere,” said Best.

The song shows up in a working scene aboard a ship in the 1957 film adaptation of the Herman Melville novel, Moby Dick, with a different melody. Listen for it at about 49 seconds into this clip:

Best said she first heard the song in the 1970s, sung unaccompanied by her father-in-law, Pius Power Sr., of Southeast Bight in Placentia Bay. Power was a fishermen who operated the last working sailed schooner in Placentia Bay.

With Power’s permission, Best documented the song and learned to sing it herself — to the tune that is heard in The Fables’ version of the song.  Not only did Power use a different tune, said Best, he also customized the lyrics.

“That’s the way it is with folk songs,” she added.

“They’re passed around, they have a long life, and they go from one place to another, and they change.”

Russell recalled first hearing Heave Away in the early 1970s, on an album by Roger McGuinn, better known as the lead singer of the American folk rock band The Byrds.

A couple of years later, he heard Anita Best sing the song, unaccompanied, with the alternate melody she learned from her father-in-law.

Russell, and other musicians, such as the band Ryan’s Fancy, learned the song from Best, and started performing it in the bars and dance halls in St. John’s and surrounding areas.

The song got new life in the mid-1990’s, when St. John’s band The Punters recorded it.

Russell, who used to accompany himself with concertina when he sang it, said The Punters’ rock and roll take on Heave Away was fine with him.

“With these traditional songs you have the freedom to redo them how you see fit,” said Russell.

It was The Fables, 1998 recording of Heave Away, on their debut album, Tear the House Down, which really seemed to catch on.

“And it makes people feel happy to sing it,”

More than a shanty

Weekend AM14:29Heave Away is more than a goal song

Folk musician Kelly Russell and singer and folklorist Anita Best talk about the origins of the song Heave Away, and its many versions over the years

Heave Away pops up in situations that have nothing to do with seafaring or hockey.

The Fables’ version of the song became popular in line dancing classes in the United Kingdom in the early 2000s. It’s the song that gets all ages on the dance floor at wedding receptions.

A line or two of Heave Away even made its way into Come From Away, the popular Broadway musical about 9/11 and Gander.

Both Russell and Best are delighted with the enduring popularity of the song, and it’s multi-purpose functions.

“The folk will use music as they want to use it, we all do that,”  said Best.

On The Go10:50Heave Away at the World Juniors

A familiar tune fills the arena every time Team Canada scores a goal at the World Juniors. We talk to Dave Fitzpatrick from The Fables about “Heave Away” being Team Canada’s official goal song.