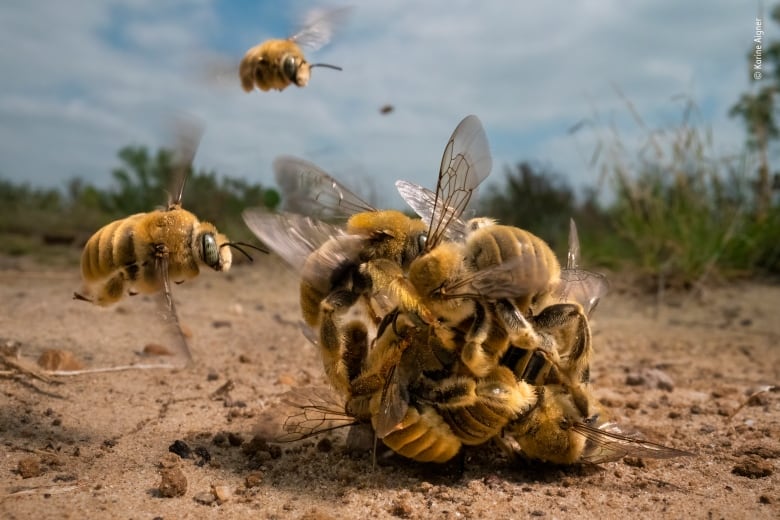 In fact, the U.S. wildlife photographer didn’t even know they existed until she stumbled on their nests while on a Texas ranch, and decided to get up close and personal with the little-known pollinators.

“What happened in that sort of photographic journey was I fell in love with a species I didn’t even know about,” Aigner told As It Happens host Nil Köksal.

“So I’m trying to make pictures, but I’m also just enamoured with the species that no one knows much about and no one gets to see.”

One of the resulting photographs — a close-up of eager males swarming around a very in-demand female — netted Aigner the U.K. Natural History Museum’s prestigious Wildlife Photographer of the Year award.

“Think about being flat on the ground, staring straight ahead with your face almost in the dirt. And in front of you are literally balls of bees. And you can see wings, you can see colours, you can see a little bit of fur and legs. And it’s just a gyrating, moving ball,” Aigner said of the winning photo.

“It’s colourful and beautiful. And then … at the same time, there’s a little bit of — I hate to use the word violence going on, because that’s not the case — but it gets a little aggressive. Everyone gets a little bit pushy because they’re all vying for the same prize that’s in the middle of all of them.”

Aigner beat out winners in 19 categories for the top prize. The Young Wildlife Photographer of the Year award went to 16-year-old Katanyou Wuttichaitanakorn from Thailand, for his closeup of a Bryde’s whale.

Both images, as well as the top photos in each category, will be featured in an exhibit that will travel across the U.K. and the world, with stops in Canada, the U.S., Australia, Denmark, France, Germany, New Zealand, Switzerland and more.

Check out some of the other finalists:

Aigner remembers when she first happened upon the unusual bees.

“I was just driving around and I saw … what looked like anthills. Little, I don’t know, one-inch volcanoes just spanning the whole dirt road,” she said.

When she got out to investigate, she didn’t find any ants, but rather swarms of little yellow bees — zipping in and out of holes in the dirt mounds.

Aigner snapped some pictures and showed them to her insect expert colleagues, who identified them as cactus bees — a species that lives in southwestern U.S. and parts of Mexico and feeds off of, you guessed it, cacti.

The little “volcanoes” Aigner had seen are their nests. And once they emerge, their lives are short. They’re born, they mate, they build a nest, lay their eggs, and then die.

And the males vastly outnumber the females — hence the intense competition.

“Up to several thousand males emerge at the same time. They patrol the nesting area and then compete intensively for the females, which emerge periodically,” Joseph Monks, Curator of Hymenoptera at the  Natural History Museum, said in a press release. “This is why they form the mating balls. They are fighting for access to a newly emerged female.”

Aigner, who worked for National Geographic for more than a decade, had never seen anything like it, and decided she needed to capture the phenomenon and share it with the world.

The shot that made her go ‘whoa’

Getting the shot was no easy feat. First, she needed to find the right technology. Her usual macro lens didn’t quite do the trick, so she swapped it for a specialized wide-angle macro lens.

Once she had the right equipment, it was all about laying down in the dirt in the hot sun, getting as close to the bees as possible without disrupting them or damaging their nests, and taking more than a thousand photos, until she found one that stopped her in tracks.

“It was like, whoa,” she said. “And I sent it to a friend of mine. And their response solidified what I already knew when I saw the shot. So I was like, OK, on to something here,” she said.

As she was photographing the cactus bees, she started learning more about them — especially the nesting females. She watched them collect pollen and bring it home over and over all, all the while evading predators and scavengers.

As she observed them, she found herself really caring about the bees, and she hopes her work will make other people care too.

“In the work that I do, you know, that starts to become a mission, especially with the state of the environment in the world and all the things that we’re losing,” she said.

“So it’s like, how can I get people to care about the super cool species that they don’t even get to see?”