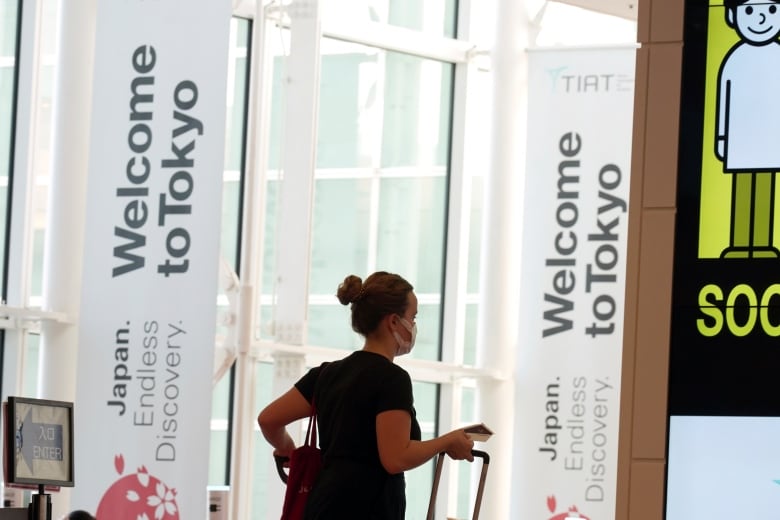 Eager to admire colourful foliage, eat sushi and go shopping, droves of tourists from abroad began arriving in Japan on Tuesday, with the end of pandemic-fighting border restrictions that had been in place for more than two years.

“We got the news that we can finally come. We are really, really happy,” said Nadine Lackmann, a German who was among the crowd of tourists arriving at Tokyo’s Haneda airport.

Travellers like Lackmann are expected to deliver a sorely needed 5 trillion yen ($47.3 billion Cdn) boost to the world’s third-largest economy. And the flood of visitors is expected to keep growing.

A daily limit of 50,000 arrivals is gone. Airlines have added flights in response to the full reopening of borders. Visa-free travel is back for short-term business visits and tourism from more than 60 countries.

David Beall, a photographer based in Los Angeles who’s been to Japan 12 times, has already booked a flight, planning to go to Fukui, Kyoto, Osaka and Tokyo. The last time he was in Japan was in October 2019. But it’s everyday things the American is looking forward to, like eating Japan’s popular pork cutlet dish, tonkatsu.

“As clichéd as it sounds, just being back in Japan after all this time is what I am most looking forward to. That of course includes hopefully meeting new people, eating the food that I’ve missed like good tonkatsu, being in nature at that time of the year, riding the trains,” he said.

About 32 million tourists visited Japan in 2019, before COVID-19. Their return is welcome for good reason. Many will have more spending power because the Japanese yen has declined in recent months in value compared to the U.S. dollar, the euro and other currencies.

The only protocols left for entry are that you must be fully vaccinated with one booster or have a negative PCR test within 72 hours of departure. Virtually all visitors from the U.S., the rest of Asia, Europe and South America who fulfil those requirements won’t have to quarantine.

In August, during the most recent coronavirus surge in Japan, nationwide daily new infections topped 200,000. By now, both case numbers and deaths have dwindled. Last week, daily deaths averaged eight people nationwide. The government has provided free COVID-19 vaccines, especially encouraging the elderly and the medically vulnerable to get inoculated.

Visitors may have to adjust to face masks, worn by most Japanese just about everywhere outside their own homes. Many stores and restaurants require customers to wear masks and sanitize their hands. Some establishments still close early, or have shuttered completely.

But bookings from abroad with Japanese carrier All Nippon Airways Co., or ANA, have already jumped five-fold compared to last week, while bookings of flights out of Japan have doubled.

Air Canada said bookings for Canadian travel to Japan jumped 51 per cent this month compared to September, while the number of travellers from Japan to Canada grew 16 per cent over the same period.

The Japanese economy can use the influx of tourist spending.

Fitch Ratings forecasts that Japan’s economy will grow at a 1.7 per cent annual pace this year and by 1.3 per cent in 2023, supported by easy credit, a recovery for service industries and a gradual fix for supply-chain problems, which will boost manufacturing and exports.

Japan had basically shut its borders to tourists, but started allowing packaged tours in June. Many people opted to wait for open-ended individual travel before booking their tickets.

With declining nervousness about the risks of infections, Japanese also are travelling more — encouraged by discounts offered by airlines, bullet trains, onsen hot springs resorts and hotels to jump-start the ailing travel industry.

“Now we are all ready to welcome people from abroad,” said Shuso Imada, general manager at the Japan Sake and Shochu Information Center.

His job is to promote sake rice wine and shochu liquor made from barley, potatoes or other vegetables, domestically and abroad.

“Autumn is the best season to enjoy Japanese food with sake and shochu,” he said.

That’s why Javier Perez Toledo waited more than a year for his honeymoon.

“We are really passionate about the country,” he said, arriving from Spain. “We are so happy that we could come.”