Jind Mahi Trailer: Sonam Bajwa and Ajay Sarkaria will bring the hues of Valentine in the month of August | Punjabi Movie News 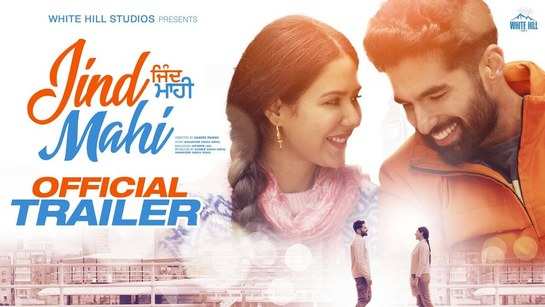 Period dramas and proper comedies are said to be the USP of Pollywood. However, recently we have seen filmmakers trying their hand in the genre of pure romantic dramas, and it appears that the Sonam Bajwa and Ajay Sarkaria starrer ‘Jind Mahi’ will be a perfect example of the same. The trailer of the film has been released today, and all that it offered us is a dose of utter innocence, pure love, and misunderstood feelings.

Story
Laado, a girl full of life (Sonam Bajwa) meets Harry, the grumpy young man (Ajay Sarkaria) in a very unusual situation. It appears as if Harry is on the verge of ending his life, and Laado tries to save him but eventually, she becomes the reason for him being in the hospital. And this is how their friendship gets a bumpy start. From there one thing leads to another, Laado starts living with Harry and his flatmate. Their camaraderie grows with time; she turns the sad Harry into a happy Harry with his positive vibes and innocence. Before Harry could even realize he falls for Laado, only to later know that she is already in love with another guy (played by Gurnam Bhullar). Initially, Harry tries to keep his emotions to himself but fails to do so, which leads to a lot of drama.

Now what becomes of this love triangle, is something that will be unveiled on August 5.

Things to look forward to
The first and foremost element of discussion here is the charm of Sonam Bajwa. In her recent movies like ‘Sher Bagga’, ‘Puaada’ and ‘Main Viah Ni Karona Tere Naal’, we have seen Sonam as a fashionista. Her each and every look has been simply stunning. However, in ‘Jind Mahi’ she has a completely different avatar. Decked in layers of cloths from top to bottom with a proper braid, she is almost unrecognizable. But it is the innocence and purity of her character that impressed us.

Moving forward to the male lead Ajay Sarkaria, the actor looks great in both his before and after makeover looks. From being a too grumpy to care look to his as Sonam says ‘yankie’ avatar, Ajay Sarkaria pulls it all effortlessly. Talking of the term effortlessly, it is the apt adjective to define Ajay’s acting as well. In short, this Jodi has got the audience’s hopes high.

Last but not least, is the surprise element – Gurnam Bhullar. He is the one who brings a twist to the tale, and it is something that probably will keep the audience on the edge of their seats.

Behind The Camera
Directed by Sameer Pannu and the story of ‘Jind Mahi’ is by Manmord Singh Sidhu.

Further, in this movie, alongside Sonam and Ajay, Raj Shoker will be seen making her debut, while Baninder Bunny, Shavinder Mahal, & Sukhwinder Chahal will be essaying pivotal roles.