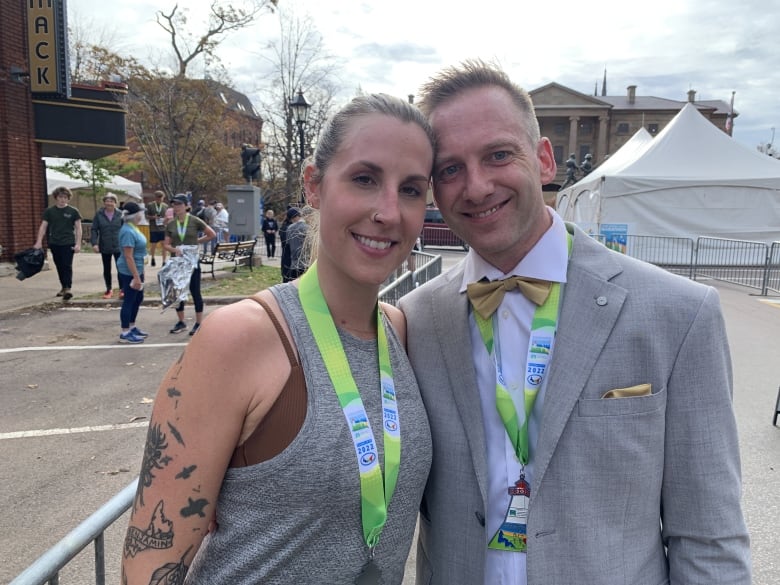 Samantha Legge just finished running 21 kilometres and, drenched in sweat and feeling a bit ill, who does she see waiting at the finish line wearing a bow tie and spiffy suit jacket with shorts and sneakers?

Her boyfriend, and he’s smirking.

What’s that in his hand? Now he’s getting down on one knee.

Legge had an inkling Scott Porter might propose this weekend during the 18th-annual P.E.I. Marathon. Still, she said she was in “absolute and utter shock” when he popped the question in the middle of the street as other runners crossed the finish line.

The couple, from Rusagonis, N.B., share a passion for running. What better place to propose?

Porter had finished the half-marathon about 10 minutes earlier, enough time to freshen up and put his plan in place.

“This is what brought us together,” he said. “And I just thought it would be a great fit since she loves the Island.”

While Legge was out of breath, she managed to muster a yes and slip on the ring.

The couple said they would celebrate the engagement by touring around the Island.

“And a hot bath, because I need to rest my legs,” Legge said. “Maybe with a glass of champagne.”

Clay Goodine of Fredericton and Sandra Cottreau of Charlottetown were the men’s and women’s marathon winners.

Goodine, competing in just his second marathon, finished at 2:59:39, 15 minutes off his first race last spring in New Brunswick.

Course altered due to Fiona

The course had to be altered this year due to damage from post-tropical storm Fiona. But Goodine said it was still striking.

“The majority of it is on the road so there’s lots of people and it’s not quite as boring, especially since I’m not from here, so I get to kind of see where I’ve been getting lost driving around. I know it pretty good now.”

Though she won the Harvest Festival 25K and Dunk River 11.6K races earlier this year, Cottreau said she had no expectation coming into the 42.2K marathon on Sunday.

“I never really run to win. I just love to run. But winning makes you feel a little bit better.”

The P.E.I. Marathon is expected to be approved as a qualifier for the Boston Marathon.