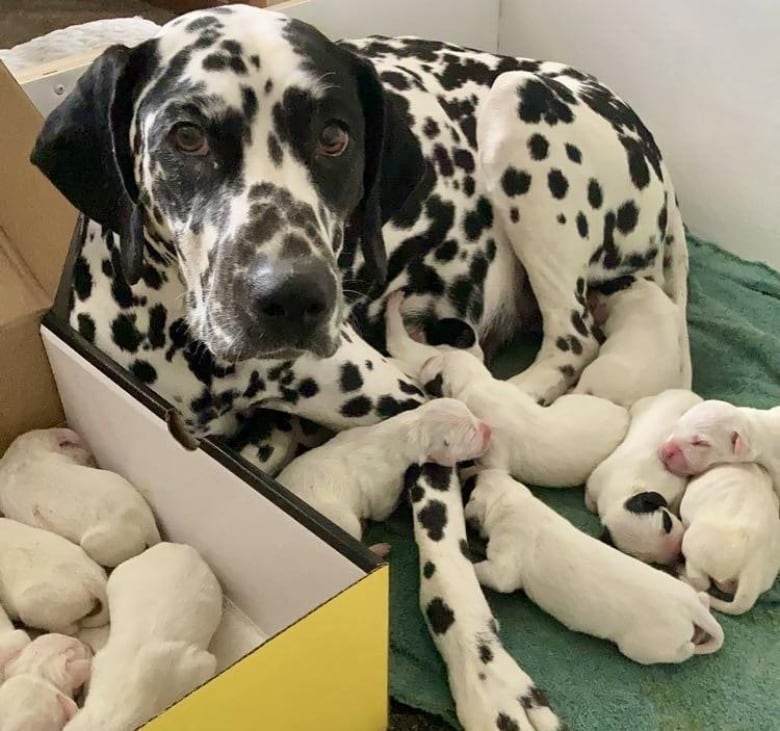 When Queeny the Dalmatian went into labour on Dec. 27, her owner, Isabelle Chouinard, expected half a dozen puppies — or maybe 10 at most.

But hours in, the puppies kept coming at the family’s home in Saint-Paul-d’Abbotsford, Que., 50 kilometres east of Montreal.

Even after the birth of eight puppies, Queeny’s belly still looked huge.

Six hours later, a total of 16 squealing pups had emerged, all of them healthy to date.

With Queeny doing well and in recovery, the family has gained attention across the province with the litter being likened to the Disney classic 101 Dalmatians.

“I don’t know if we hold the record with 16, but the average is really … seven to nine,” said Chouinard.

Family is helping Queeny with the feedings

Chouinard says it was love at first sight when they met and adopted Queeny two years ago in the nearby city of Granby.

Avid Disney fans, the family loves their energetic and affectionate Dalmatian and decided to breed her — as they did one other time with their previous dog.

“We wanted to do it once for the experience,” said Chouinard, adding that the family put in their guesses on how many puppies to expect.

“Some people said six or eight. Me, I said 10 because I saw her and found she was very big,” said Chouinard.

WATCH | Queeny’s owner describes the surprise when 16 puppies were born:

A Quebec family was in for a surprise when their Dalmatian Queeny gave birth to 16 health puppies last month.

Dr. Louise Dubois, a veterinarian with 33 years experience with a practice in Granby, has never seen a litter this big.

“We feed eight at a time. We have to make a change every hour to let her feed the puppies,” said Chouinard.

Having had one large litter makes her more likely to have another one, “and that’s very demanding on my dog. I love her so much so I don’t want to work her too hard,” said Chouinard.

Ever since the news got out about the adorable litter, the number of candidates looking to adopt the dogs has skyrocketed, said Chouinard.

Although the puppies must spend at least another month with their mother before they can be adopted, she says the process of finding them the right homes has been time-consuming.

“This is my problem right now,” said Chouinard. “Above all I’m trying to guarantee that people are prepared to handle a very active dog.”

“I want to make sure they find good homes so everything goes well and the puppies are not turned in to a shelter or back to my home afterward,” said Chouinard.

The family has also been mulling over the idea of keeping one for themselves — and for Queeny.

“It’s a big family discussion at the moment.”

Breakaway7:13Granby family welcomed 16 tiny Dalmatians into their home over the holidays

Having a puppy at home requires a lot of patience, and sometimes middle of the night wake-up calls. Imagine having… 16 pups! Isabelle Chouinard joins guest host Kim Garritty to present the new family members.