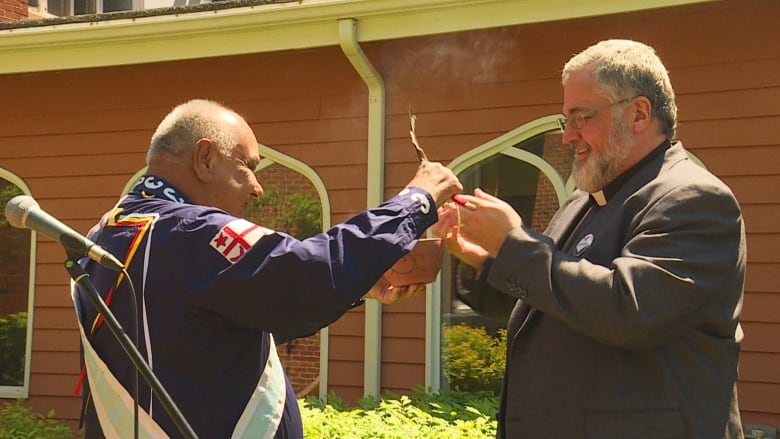 John Joe Sark was being remembered Tuesday as spiritual leader for the Mi’kmaq who devoted his life to stamping out racism and injustice.

Tributes have been pouring in for Sark ever since he died on Sunday at the age of 77 from complications from diabetes.

In the 1990s he asked Pope John Paul II for an apology from the Roman Catholic Church for its role in residential schools.

Sark dropped out of school in Grade 8, saying he’d been the victim of racism. He went on to become one of the first Mi’kmaw graduates from the University of Prince Edward Island and spent the rest of his life working to end the racism he faced as a child.

Sark helped draft the United Nations Declaration on the Rights of Indigenous Peoples.

“Keptin John Joe was an extraordinary man who fought hard for decades for the rights of the Mi’kmaq and worked tirelessly to educate people on our true shared history,” said Chief Darlene Bernard of Lennox Island First Nation.

“He was revered as an advocate, educator, author, father, and friend to many, and we will miss him dearly.”

Almost 30 years before the NFL team from Washington changed its name, he got Charlottetown Rural High School to do away with the name “Redmen,” in favour of the Raiders.

When the Confederation Bridge first opened in 1997, Sark said it should be named Abegweit Crossing. Now there are official efforts underway to change the name.

In a statement, P.E.I. Premier Dennis King called Sark “an ambassador of his people, [who] proudly stood in front of premiers, prime ministers and pontiffs to seek respect and reconciliation.”

When Sark received the province’s highest honour, the Order of P.E.I., he returned it in protest, saying MLAs ignored his call to have the name of General Jeffrey Amherst removed from a national historic site. Amherst had suggested in letters distributing blankets laced with smallpox to Indigenous people.

“John Joe Sark’s role as a spiritual leader for our people has built a lasting bridge of understanding between cultures,” said Chief Junior Gould of Abegweit First Nation.

“In his role as guardian of the spiritual and cultural integrity of the Mi’kmaq people, he fought to have offensive stereotypes removed from schools and institutions in Prince Edward Island, his legacy will live on through the many impacts he made.”