Neetu Kapoor is ‘gearing up for 2023’, shares pic of holidaying in London | Hindi Movie News 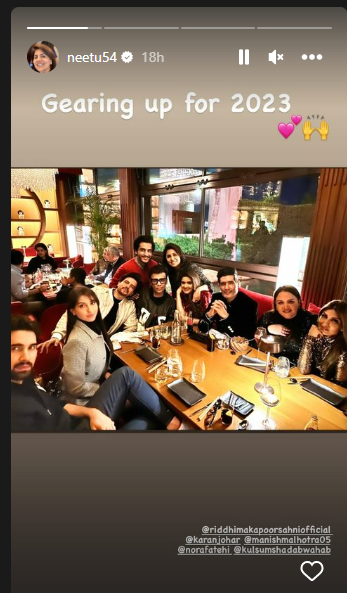 The year has almost come to an end and we all are looking forward to 2023, with a renewed sense of hope. As several celebs such as Katrina Kaif, Vicky Kaushal, Kareena Kapoor, Saif Ali Khan, Rakul Preet Singh, Anushka Sharma, Virat Kohli, Kiara Advani and Sidharth Malhotra were seen taking off to an exotic locale to bring in 2023, veteran actor Neetu Kapoor has now joined that list and has been spending the holidays in London.

Taking to her IG stories, the
Do Dooni Chaar actor revealed that she has been living it up in London and shared a happy picture of herself along with daughter Riddhima Kapoor Sahni, filmmaker Karan Johar, fashion designer Manish Malhotra and actor-dancer Nora Fatehi amongst others.

The pic showed the group posing at a restaurant, presumably all set to enjoy a hearty meal. The pic also featured Lakshya Lalwani, who is all set to make his Bollywood debut alongside Shanaya Kapoor’s
Bedhadak.

On the workfront, Neetu Kapoor has recently wrapped up the shoot for Letters To Mr Khanna. The movie is a coming of age drama exploring family dynamics, mother-son relationship and human emotions. It co-stars Sunny Kaushal, Asrani and Shraddha Srinath.