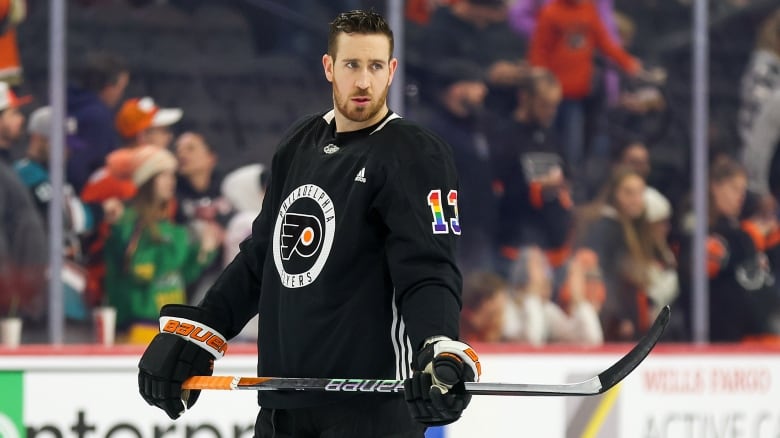 A hockey agent says an NHL player’s refusal to take part in his team’s LGBTQ+ Pride Night warmup is an indication that more work needs to be done to make the sport more inclusive.

He cited his Russian Orthodox religion as the reason.

“I respect everybody’s choices,” Provorov said after the game. “My choice is to stay true to myself and my religion. That’s all I’m going to say.”

Bayne Pettinger, a Toronto-based NHLPA certified player agent who came out as gay in 2020, said he was disappointed by Provorov’s decision to use his platform for “essentially a protest” that sends a message to hockey fans and his teammates who did take part in the warmup.

“[It] just says that, ‘Hey, it’s making it about me,'” Pettinger told CBC’s All Points West. “I found it selfish and frankly disrespectful towards the the gay community.”

He says the NHL has made great strides when it comes to making the sport more inclusive — the league’s Hockey is for Everyone initiative encourages teams to celebrate the diversity that exists in their respective markets — but Provorov’s actions signal something different.

“I get asked all the time, ‘When is an NHL player going to come out?’ And you see something like last night — that’s not a safe environment to do that yet,” he said.

“We still have some steps needed to create a safe environment for a player because they will have that spotlight upon them.”

Pettinger, who grew up in Victoria, B.C., says Provorov’s views don’t reflect those of many NHL players he deals with.

“I don’t want to let the squeaky wheel get the grease … The majority of the players in the game that I heard from today or that I’ve worked with in the past or were involved in my coming-out story a couple of years ago are very inclusive and [respectful] and it’s not even an issue for them,” he said.

Pettinger said Flyers players Scott Laughton and James van Riemsdyk met after the game with about 50 people in the LGBTQ+ community.

Laughton said overall the Flyers had a “great, great night that brings a lot of awareness,” the Associated Press reported.

Laughton said there would be more conversations ahead with Provorov, who moved from Russia to the United States as a teenager.

“I don’t hold anything against anyone,” Laughton said after the Flyers’ 5-2 victory over the Anaheim Ducks. “It’s nothing like that. It was an awesome night and I’m very happy we got a win on a night like this.”

“I’m a strong believer that no one is born to hate another group or religion or race, that’s taught,” he said.

“We can’t put ourselves in Provorov’s shoes of how he was raised and his beliefs. We can only try to educate and humanize.”