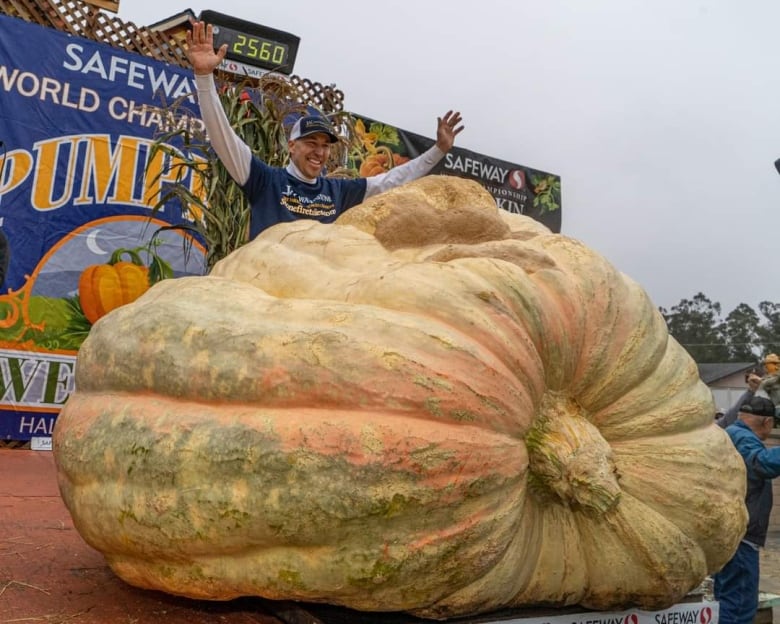 As It Happens5:47North America’s largest pumpkin is now the world’s largest jack-o’-lantern

This pumpkin weighs 1,161 kilograms and took 11 hours to carve. But no one thought it would even survive — let alone break world records, says its grower.

“This pumpkin was never even supposed to be. I dropped a five-gallon bucket full of dirt on it when it was … about a pound,” Travis Gienger, a horticulture teacher from Anoka, Minn., told As It Happens host Nil Köksal.

Maverick the pumpkin — named after Tom Cruise’s character in the movie Top Gun — broke the North American record for largest pumpkin at a weigh-off in Half Moon Bay, Calif., earlier this month.

On Friday, Gienger brought the massive vegetable back home for a carving, with the hope of breaking the Guinness World Record for largest jack-o’-lantern.

In an email to As It Happens on Monday, Guinness World Record confirmed that Gienger and his pumpkin not only broke the world record for largest  jack-o’-lantern, but also for the world’s heaviest.

“No one thought it would even make it,” Gienger said. “And then it grew into North America’s largest.”

He said his pumpkin grew at an exceptional speed, at around 25 kilograms a day. That’s 669 kilograms in just around a month.

Gienger suspects that this pumpkin could be the most photographed vegetable of the year.

“This pumpkin will have somewhere in the neighbourhood of five to 10 thousand pictures of it,” he said.

It was supposed to be Tom Cruise

Gienger may have grown the colossal gourd, but he had to commission carver Mike Rudolph to turn it into the jack-o’-lantern of the century.

Originally, the pair hoped to carve the pumpkin into Maverick’s Top Gun helmet with a mask and goggles. But it turns out this was one pumpkin that did not look like Tom Cruise.

“To get a round helmet on a very irregular shaped pumpkin with clean lines was just not going to work,” Gienger said.

Instead, Gienger thought the symbol of an eagle would best represent their country. The final product is a bald eagle’s head and talons, each holding an American flag.

Rudolph, who makes his own tools, had to climb inside the pumpkin to carve it properly. It took about two hours to scrape the seeds out of it.

Those seeds will now be sold worldwide at auctions and various clubs.

Gienger says he believes whoever gets those seeds could have another world record on their hands.

“The seed could grow the next world record,” he said. “No problem.”