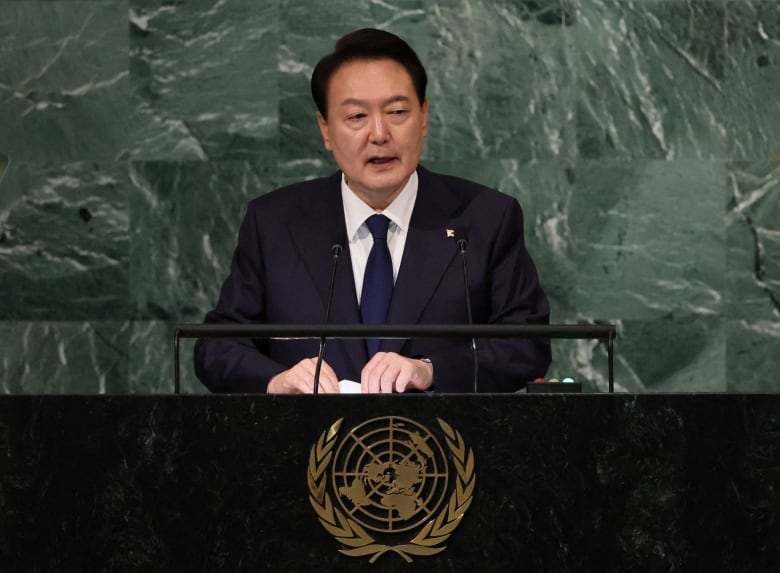 The test firing was conducted on Wednesday, and was aimed at “enhancing the combat efficiency and might” of cruise missiles deployed to the Korean People’s Army “for the operation of tactical nukes,” state media Korea Central News Agency (KCNA) said.

Stressing that the test launch was another clear warning to its “enemies,” Kim said the country “should continue to expand the operational sphere of the nuclear strategic armed forces to resolutely deter any crucial military crisis and war crisis at any time and completely take the initiative in it,” according to KCNA.

KCNA reported that the two missiles test-fired on Wednesday flew for 10,234 seconds and “clearly hit the target 2,000 kilometres away.”

A U.S. State Department spokesperson declined to comment on the launches, and said Washington remained focused on co-ordinating closely with its allies and partners to address the threats posed by North Korea.

South Korean President Yoon Suk-yeol’s office said the North’s cruise missiles do not pose a threat as they are “slow enough to be intercepted,” but Seoul is ready to sternly respond to Pyongyang’s provocations with “overwhelming forces.”

South Korea’s military said it had monitored the launch in real time and was continuing to analyze data from the tests.

North Korea first tested a “strategic” cruise missile in September 2021, which was seen by analysts at the time as possibly the country’s first such weapon with a nuclear capability.

Wednesday’s test confirms that nuclear role and that it is operational, although it is unclear whether North Korea can build warheads small enough for a cruise missile.

The cruise missiles are among a number of smaller weapons recently developed by North Korea to fly low and manoeuvre so as to better evade missile defences.

Cruise missiles and short-range ballistic missiles that can be armed with either conventional or nuclear warheads are particularly destabilizing in the event of conflict as it can be unclear which kind of warhead they are carrying, analysts said.

“North Korea’s cruise missiles, air force and tactical nuclear devices are probably much less capable than propaganda suggests,” said Leif-Eric Easley, a professor at Ewha University in Seoul. “But it would be a mistake to dismiss North Korea’s recent weapons testing spree as bluster or sabre-rattling.”

U.S. President Joe Biden’s administration rolled out a long-delayed national security strategy on Wednesday with only a lone reference to North Korea, underscoring limited U.S. options to contain its nuclear and missile programs.

Daniel Russel, the top U.S. diplomat for East Asia under former president Barack Obama, said this was striking, “not only because it passes so quickly past a persistent and existential threat, but also because it frames the strategy as ‘seeking sustained diplomacy toward denuclearization,’ when North Korea has so convincingly demonstrated its utter rejection of negotiations.”

In South Korea, Joly calls for peace amid threats from North

Canada’s Foreign Affairs Minister Mélanie Joly called for peace on the Korean peninsula during a visit to the demilitarized zone. North Korea has been testing weapons for weeks, prompting security tensions in the region.

A report by the U.S.-based Center for Strategic and International Studies said on Wednesday that a recent underwater launch of a ballistic missile from a lake probably has more political than military usefulness.

“Rather than an emerging threat, this test was most likely a propaganda and deception operation designed to focus regional and world attention on North Korea’s desired external image of a mighty and powerful nuclear-armed nation,” the report said.

The North’s pursuit of new types of nuclear weapons has renewed calls by some in South Korea to redeploy American tactical nuclear weapons, which were withdrawn in 1991, or for Seoul to leave the Non-Proliferation Treaty and develop its own arsenal.

After backing the idea of asking the United States to redeploy nuclear weapons during the election campaign last year, Yoon has since said that option has been ruled out.

Senior members of this party, however, this week said it was time to reconsider.