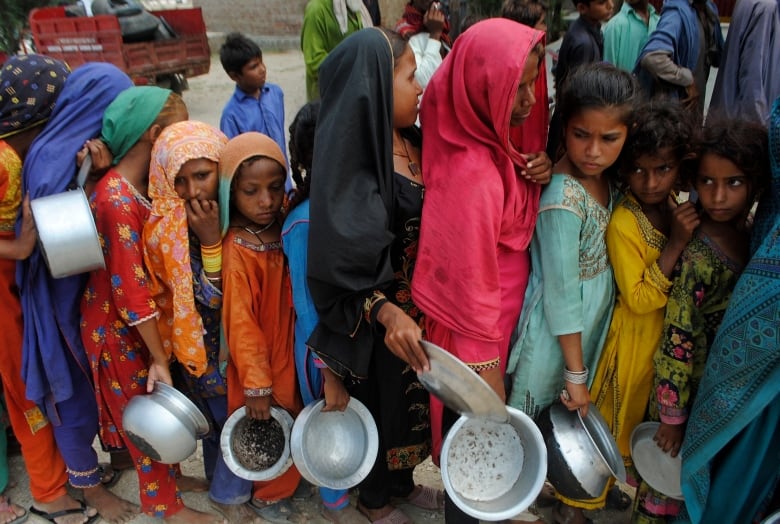 Pakistan scrambled to deliver aid to those most in need on Tuesday as the death toll from record-breaking floods in this impoverished Islamic nation rose further, with no respite in sight from the unprecedented monsoon rains.

The rains started early this year — in mid-June — and swept away entire villages, bridges and roads, leaving hundreds of thousands homeless. At one point, a third of the country’s territory was inundated with water.

Authorities said the overall death toll reached 1,481 on Tuesday, with 54 more people dying in rain-related floods in the past 24 hours, with the majority of those deaths in the hard-hit province of Sindh. Experts have said that climate change has been blamed in large part for the deluge, the worst in recent memory.

Sherry Rehman, Pakistan’s minister for climate change, warned that the rains, which had abated late last month only to restart this week, are predicted to continue lashing much of the country in the coming weeks.

So far, rescuers have evacuated 179,281 people from flood-hit areas.

It will take up to six months to drain water from those areas, officials said. Waterborne diseases have already sickened thousands of people — and now there are fears of mosquito-borne dengue fever. Mosquitos have spread, due to stagnant waters following the flooding.

“With 584,246 people in camps throughout the country, [the] health crisis could wreak havoc,” Rehman said in a statement.

She added that so far, the southern port city of Karachi has registered an outbreak of dengue fever. Karachi is also the capital of Sindh province, one of the regions most affected by the floods.

The floods have also destroyed crops, including 70 per cent of the onion harvest, along with rice and corn, Rehman said. Much of the country’s agriculture belt is underwater and Pakistan is in talks with several nations to import wheat. Iran has already dispatched fresh vegetables to Pakistan.

In Sindh, officials said more downpours could delay the return of about 600,000 people from camps to their villages, towns and other urban areas. Strong winds the previous day blew away several relief camps in remote areas in Sindh.

Prime Minister Shahbaz Sharif’s government has started distributing money to those who lost homes in the flooding to help them restart their lives.

Canada announces funds to support victims of flooding in Pakistan

Prime Minister Justin Trudeau says the federal government will match donations made by Canadians to the Humanitarian Coalition to a maximum of $3 million. Canada will also send another $25 million to support development projects.

Media also quoted Sharif as telling his cabinet on Tuesday that despite the fact that Pakistan emits less than one per cent of heat-trapping carbon dioxide, it faces widespread damage from climate-induced floods, disproportionately more than other nations.

The floods have damaged 1.7 million homes, according to the National Disaster Management Agency. Thousands of pregnant women are living in tents and makeshift homes.

Initially, Pakistan estimated that the floods caused $10 billion US in damages, but authorities now say the damages are far greater. The devastation has forced the United Nations to urge the international community to send more help.

So far, UN agencies and various countries, including the United States, have sent about 90 planeloads of aid. Canada on Tuesday pledged to match donations to the Humanitarian Coalition up to $3 million Cdn and an additional $25 million to help address the devastation and support development projects.

Last week, UN Secretary-General Antonio Guterres travelled to flood-hit areas in southern and southwestern Pakistan to see first-hand the extent of the disaster.

“I appeal for massive support from the international community as Pakistan responds to this climate catastrophe,” Guterres tweeted from Pakistan. Earlier, he had called on the world to stop “sleepwalking” through the dangerous environmental crisis.

As Pakistani authorities contend with the unprecedented flooding, security forces are also struggling with militant attacks.

According to Pakistan’s military, three soldiers were killed in the country’s northwest by militant fire from across the Afghan border.

The attack hit a border security post in Kurram, a district in the Khyber Pakhtunkhwa province. The military in a statement said the shooting came from the Afghan side of the frontier.

On Tuesday, a roadside bomb struck a vehicle carrying local village leaders and police in the flood-hit Swat Valley in the northwest, killing five people, including two police officers.

No group claimed responsibility for the bombing, and Saeed Khan, a police officer in Swat, said they are still investigating.