Pat John, actor who played Jesse on The Beachcombers, has died 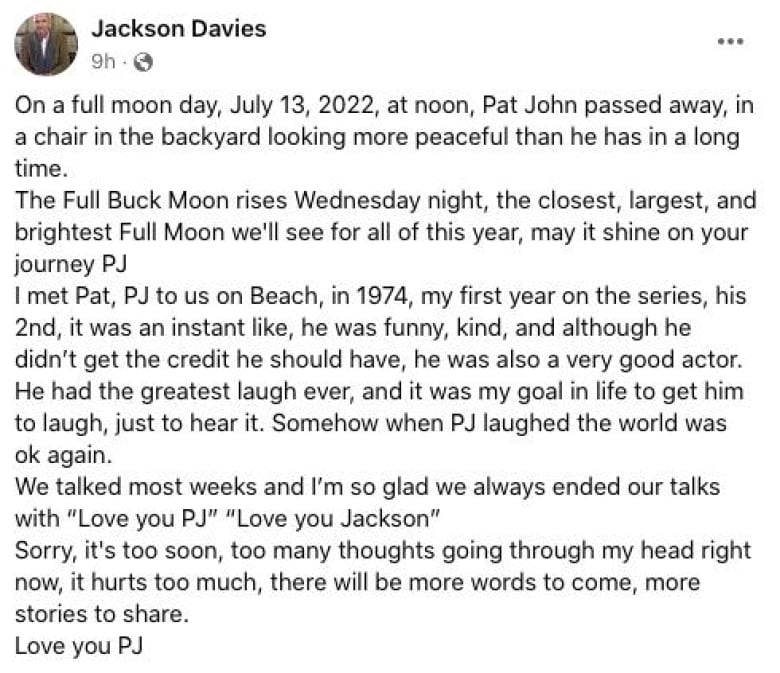 The actor died at noon on Wednesday “looking more peaceful than he has in a long time,” Davies wrote in a Facebook post announcing his death.

“He was funny, kind, and although he didn’t get the credit he should have, he was also a very good actor. He had the greatest laugh ever, and it was my goal in life to get him to laugh, just to hear it.”

John, a member of the shíshálh Nation in Sechelt, B.C., was cast on The Beachcombers as a teenager.

In the years that followed he created a new blueprint for Indigenous characters on screen, eschewing outdated stereotypes and caricatures as Jesse.

The Beachcombers ran for 19 seasons, making it the second longest-running Canadian television drama ever. Having first aired in October 1972 — with over 350 episodes to follow — this fall marks its 50th anniversary.

“I don’t think I would have ever thought of being an actor if Beachcombers hadn’t happened,” John said in a 2002 article printed by the Saskatoon Star-Phoenix.

The show chronicled the coastal adventures of log salvager Nick Adonidas (Bruno Gerussi) and his beachcombing partner, Jesse Jim, as they tracked down stray logs aboard their tugboat, the Persephone.

It was a hit by its second season and enjoyed 15 more as one of CBC’s highest rated shows, helped by the fact that its cast — including John, Davies and Gerussi — was beloved by viewers in Canada and internationally.

The show was filmed and set in Gibsons, B.C., putting British Columbia on the map as a destination for film production and talent, one of the very first shows to establish the province as Hollywood North.