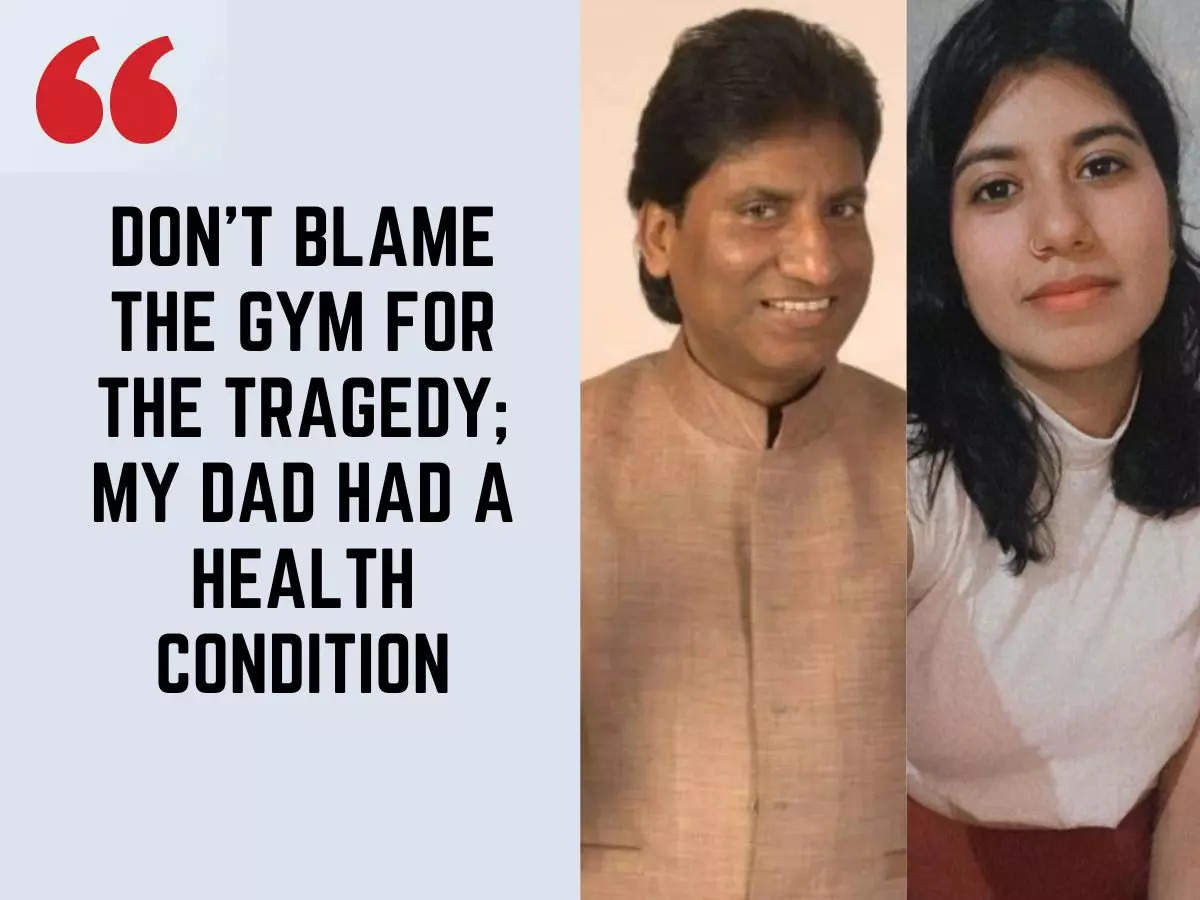 Raju Srivastava’s daughter Antara decided to talk about her father FIRST and EXCLUSIVE on VIDEO with ETimes. The young lady spoke at length, rewinding on her father’s last moments and her last interaction with him. And of course, all about his shows and flair for fun and comedy as well.
There was a mix-up she thought when her mother called her with the shocking news on September 21, 2022. Antara felt that it could be her uncle who had passed away, Raju’s brother whose name is Kaju. This a very EMOTIONAL INTERVIEW and we insist that you see it on the video embedded below:

Here are the excerpts from the conversation:
What are your earliest childhood memories of your father?

He liked to take us out to many places- restaurants, theatres. He would ensure we match a film every week. I remember I was 9-years- old and he asked me to go to a bank alone. The bank was a bit far but he gave me directions. He wanted us to be aware and conscious of everything. Also, I remember from my childhood days that he used to write a diary where he would list down all that he had to do during the day. And he would ensure that he accomplishes the full list every day. I wish I could do that. I tried but I could not. He always told us to express our opinion and not be scared.

He had his fair share of struggles before he made it, and I think he instilled every value in me and my brother that needs to be adhered to, if one wants to be successful.

He was particular that we should be home in time. He never wanted us to be brats who would splurge money on partying. He kept us in touch with reality; we are not living in a limited world of clubbers where you don’t know what’s actually happening in the world.

Was he a strict father when it came to marks and grades in your studies, or for that matter your brother’s?

No, he never pressurised us on marks. He never wanted us to study too hard. He always said that there were far too many other challenges in life which we should prepare ourselves for. But that doesn’t mean that my brother (Ayushman) and I didn’t devote time to studies. We did study; our mother always saw to it that we did.

Which performance of his would you rate as his best?

That’s the most difficult question. I think what appealed to me about him was that his comedy was relatable. And yes, his ‘Sholay’ item was outstanding. One more thing, his style of personifying objects was a standout- and I think many comedians don’t have this in them.

Was he a gym person? Did he indulge in too many workouts?

Yes, he would try and stick to his gym routine come what may. He was very conscious about his physical fitness. He would go to the gym at least every alternate day. When he was outdoors, he would search out a gym here and there, even on the road looking out from his car- and hit it. He was a major motivation for our family members who did not exercise.

Whatever happened to him, it was just incidental that it happened while he was gymming. He had a health condition. We shouldn’t blame the gym.

Life never tells you that this is going to be the last time. He was out of town for the last 10 days. A day after my birthday, he had shot for ‘Laughter Champion’. We celebrated my birthday and he shared the kind of jokes he’d cracked there. A few days after that, he left for outstation. He often went for tours.

Where exactly were you when the tragedy happened?

My mom, brother and I were in Mumbai. I was headed for some work. I had a meeting for 12 noon. While I was on my way, I got a call from my mom.

Had he reduced the frequency of his gym after his heart condition?

Yes- the number of days and the time spent, both.

In fact, I thought that my chachu had passed away when my mom called me with this information. I felt there was a mix-up. My chachu’s name is Kaju and in fact, he was very much admitted to AIIMS in Delhi (owing to accumulation of fluid in his brain) when my father passed away. In fact, my Dad had also made quite a few of his stay arrangements. In fact, my chachu was slated to get operated on the same day. And, my Dad had been shuttling in and out of the hospital, attending to him- and I thought the news of my father’s death was a rumour.

But my mom told me that she too had thought that it was a rumour and had already clarified, and she had been told that he had fainted while he was on the treadmill.

We immediately booked our tickets for Delhi and took the first available flight.

Did he have any discomfort before that unfortunate day?

There was a slight discomfort but nothing significant. We avoid such things and now we have learnt that we should act in time.

What are you doing in your life?

I have assisted on quite a few film projects, such as ‘Vodka Diaries’, wherein I was an Assistant Producer. We made a short film starring Kalki Koelchin and then one with Shreyas Talpade. Currently, I am working on a web show. Apart from this, I assisted J P Dutta on ‘Paltan’.

My brother is a sitar player, learning the instrument from Pandit Niladri Kumar. He performs with Kailash Kher’s bands.

So you want to become a director or producer in Bollywood?

Yes. Can I say something more?

I must thank Daddy’s fans who came to support us in our hour of crisis. They came from all parts of the country.

I want to thank our PM, Narendra Modi ji. He was immediately in touch with my mother ever since Dad collapsed and remained in touch till the last day. A lot of things eased out for us, consequently. I also thank UP CM Yogi Adityanath ji. We were very well taken care of. Shri Brajesh Pathak ji and Keshav Prasad Maurya ji, Piyush Goel ji, Rajnath Singh ji and Dr Harsh Vardhan stood by us- and thanks to them too. I am not taking these names because of my father’s political affiliations. He was loved by many people from several parties. Arvind Kejriwal wrote us a letter. Laaloo Prasad Yadav is a big fan of my Dad. And I must tell you that there is one man who enquired about my Dad’s health every single day when he was hospitalised. And that’s Amitabh Bachchan. That’s a very big thing. My Dad idolised him and he became what he was because of Mr Bachchan. This all gave us a lot of strength. Kapil Sharma paid a tribute to my father in his show and I am very thankful to him for that.

Johny Lever called up 4 times every day and he was praying a lot for my father. TVF’s Shreyansh Pandey and Arunabh Kumar held a screening of my father’s last shoot of TVF. Ironically, he was talking about life and death in that. It was a very emotional moment. There were other names too from the industry and the list is too long.

Lucknow Mayor Sanyukta Bhatia has named a crossroad with my father’s name. A garden in Kanpur is being named in his memory.

We lost a national treasure…

(Folds her hands). Ayushman and I think we are lucky and it is a blessing that we were born to him.