Residents of district in northeastern B.C. given evacuation order as wildfire grows 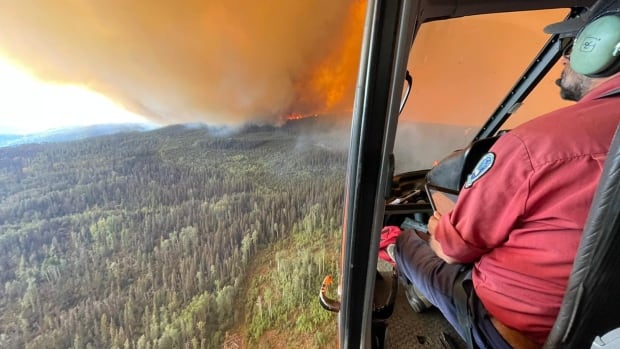 An evacuation order has been issued for the residents of a small town in northeastern B.C. after a wildfire burning nearby for the past 11 days grew to 174 square kilometres.

Residents of the entire District of Hudson’s Hope, more than 1,000 kilometres northeast of Vancouver, are being asked to immediately leave their homes and the area and travel to Fort St. John via Highway 29, about an hour’s drive away.

Hudson’s Hope has about 1,000 residents.

📍EVACUEES OF HUDSON’S HOPE/BATTLESHIP MOUNTAIN WILDFIRE: Check in at the North Peace Arena located at 9805 – 96 Ave FSJ for ESS.<br><br>Residents who have already found their own accommodations: call 250-794-3310 to check in with ESS.<a href=”https://twitter.com/hashtag/PRRDWILDFIRES?src=hash&amp;ref_src=twsrc%5Etfw”>#PRRDWILDFIRES</a> <a href=”https://twitter.com/hashtag/BATTLESHIPMOUNTAIN?src=hash&amp;ref_src=twsrc%5Etfw”>#BATTLESHIPMOUNTAIN</a>

The Battleship Mountain wildfire was discovered on Aug. 30 and has since grown to 174 square kilometres in size. The B.C. Wildfire Service said the fire is currently classified as burning out of control.

“Temperatures are forecasted to increase into the weekend and there is no measurable amount of precipitation expected,” the service said on its website about the fire. “Increased fire behaviour can be expected as temperatures increase.”

On Friday, the service said nearly 200 fires are currently burning in B.C., with 77 reported in the last week, and the wildfire service says the majority have been caused by lightning.