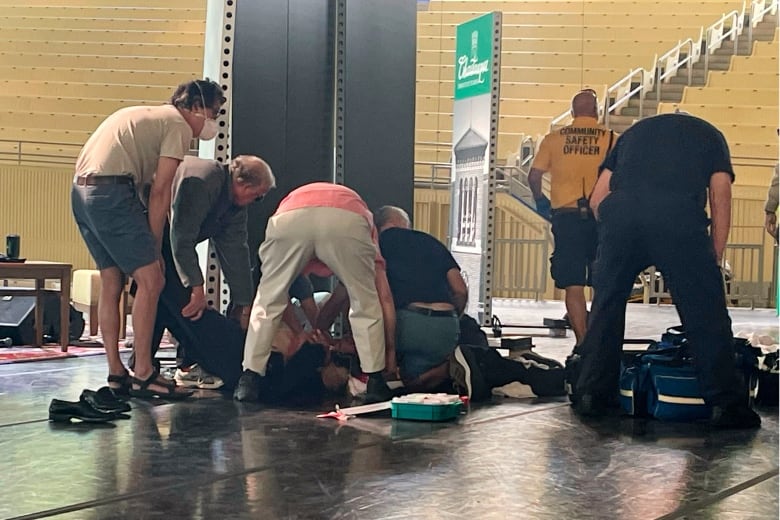 Canadian writers, publishers and literary figures doubled down on the right to freedom of thought and expression on Saturday, one day after an attack in the U.S. on award-winning author Salman Rushdie that has left him on a ventilator in hospital.

Rushdie, whose novel The Satanic Verses drew death threats from Iran’s leaders in the 1980s, was stabbed in the neck and abdomen Friday by a man who rushed the stage as the author was about to give a lecture in western New York.

Louise Dennys, executive vice-president and publisher of Penguin Random House Canada, has published and edited Rushdie’s writings for over 30 years. She condemned the attack on her longtime friend and colleague as “cowardly” and “reprehensible in every way.”

“He is without doubt one of the greatest proponents of freedom of thought and speech, and debate and discussion in the world today,” Dennys said in a telephone interview. “I have hopes of his recovery. He’s a great warrior and fighter, and I hope he is fighting back.”

Rushdie, 75, a native of India who has lived in Britain and the U.S., is known for his surreal and satirical prose style.

The Satanic Verses drew death threats after it was published in 1988, with many Muslims regarding as blasphemy a dream sequence based on the life of the Prophet Muhammad, among other objections. Rushdie’s book had already been banned and burned in India, Pakistan and elsewhere before Iran’s Grand Ayatollah Ruhollah Khomeini issued a 1989 fatwa, or edict, calling for Rushdie’s death.

A 24-year-old man is in custody, facing charges in Friday’s attack. The accused was born a decade after the publication of The Satanic Verses. Police said the motive was unclear. Investigators were working to determine whether anyone else could be linked to the incident.

After the publication of The Satanic Verses, often-violent protests erupted across the Muslim world against Rushdie. At least 45 people were killed in riots over the book, including 12 people in Rushdie’s hometown of Mumbai. In 1991, a Japanese translator of the book was stabbed to death and an Italian translator survived a knife attack. In 1993, the book’s Norwegian publisher was shot three times and survived.

The death threats prompted Rushdie to go into hiding under a British government protection program, though he cautiously resumed public appearances after nine years of seclusion, maintaining his outspoken criticism of religious extremism overall.

‘He couldn’t be silenced by fear’

“We all depend on the storytelling, power and imagination of writers,” Dennys said. Rushdie “came out of hiding because he realized he wanted to play a role in the world we live in, defending those rights, she said.

“He couldn’t be silenced by fear, and I think that point is something he will continue to make if, as we all hope, he survives.”

Dennys said the attack is already having the opposite effect of its suspected intentions given the outpouring of support from the international literary community, as well as activists and government officials, who cited Rushdie’s courage for his longtime free speech advocacy despite risks to his own safety.

“It’s brought everyone together to realize how precious and fragile our freedoms are and how important it is to speak up for them,” Dennys said.

The president of PEN Canada, an organization that defends authors’ freedom of expression, condemned the “savage attack” on their “friend and colleague,” Rushdie, who is a member.

I was proud to welcome Salman Rushdie to Ontario 30 years ago. As a longtime supporter of PEN I was happy to join his friends in celebrating his courage. It is even more important today that we support free expression, and show our solidarity and support for Salman. <a href=”https://t.co/7nDaizQjV8″>pic.twitter.com/7nDaizQjV8</a>

Canadian writer John Ralston Saul, who has known Rushdie since the 1990s, said the author was always aware that someone might attack him, but he chose to live publicly in order to speak out against those trying to silence free expression and debate.

“[Rushdie’s] work and whole life are a reminder of what the life of the public writer is in reality,” he said. “This would be the worst possible time to give in or show any sense that we must be more careful with our words. We’re not really writers if we give in to that kind of threat.”

The accused, Hadi Matar, was arrested after the attack at the Chautauqua Institution, a non-profit education and retreat centre. Matar’s lawyer entered a not guilty plea in a New York court on Saturday to charges of attempted murder and assault.

After the attack, some longtime visitors to the centre questioned why there wasn’t tighter security for the event, given the threats against Rushdie and a bounty on his head offering more than $3 million to anyone who killed him.

Saul, who spoke at the Chautauqua Institution years before Rushdie’s attack, said it has an “open tradition” of debate, free expression and anti-violence going back over 100 years.

“It’s one of the freest places to take advantage of our belief in freedom,” he said.

Salman Rushdie attack ‘got so real, so fast,’ witness says

Witnesses to the attack on Salman Rushdie Friday in western New York recount how a man approached the stage at the Chautauqua Institution where the author was about to give a lecture, attacked him and was later pinned down by people from the audience.

Roland Gulliver, director of the Toronto International Festival of Authors, tweeted Saturday that literary festivals and book events are “spaces of expression, to tell your stories in friendship, safety and respect.”

“To see this so violently broken is incredibly shocking,” he wrote.

Expressions of sympathy came from the political realm as well, with Canadian Prime Minister Justin Trudeau condemning the attack as a “cowardly … strike against freedom of expression.”

“No one should be threatened or harmed on the basis of what they have written,” read a statement posted to Trudeau’s official Twitter account. “I’m wishing him a speedy recovery.”

Rushdie suffered a damaged liver and severed nerves in his arm, and is likely to lose an eye as a result of the attack, the author’s agent, Andrew Wylie, said Friday evening.

A physician who witnessed the attack and was among those who rushed to help described Rushdie’s wounds as “serious but recoverable.”