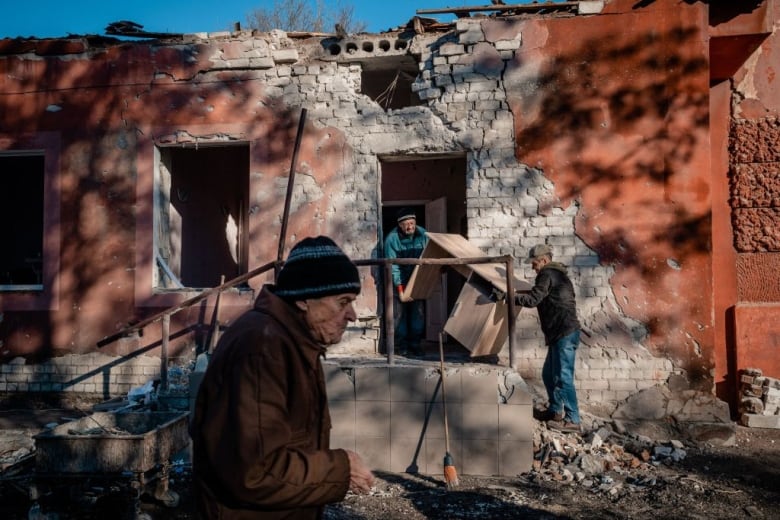 Russian forces stepped up mortar and artillery attacks on the recently liberated city of Kherson in southern Ukraine on Wednesday, Ukraine’s military said, while also exerting constant pressure along front lines in eastern regions of the country.

The United Nations High Commissioner for Human Rights (OHCHR) on Tuesday released a count of civilian casualties related to the war in Ukraine. It said 6,884 people are known to have died, including 429 children, between Feb. 24, when the invasion began, to Dec. 26. The OHCR put the number of injured at 10,947.

Most of the civilian casualties recorded were caused by the use of explosive weapons, it said in a statement.

“OHCHR believes that the actual figures are considerably higher, as the receipt of information from some locations where intense hostilities have been going on has been delayed and many reports are still pending corroboration,” the statement said.

Heavy fighting also persisted on Wednesday  around the Ukrainian-held city of Bakhmut, now largely in ruins, in the eastern province of Donetsk, and to its north, around the cities of Svatove and Kreminna in Luhansk province, where Ukrainian forces are trying to break Russian defensive lines.

Air raid sirens also sounded across Ukraine on Wednesday morning, officials said. Ukrainian social media reports said the nationwide alert may have been declared after Russian jets stationed in Belarus took off. Reuters was unable to immediately verify that information.

Britain’s defence ministry said in its latest update on the military situation in Ukraine that Russia had likely reinforced the Kreminna section of the front line as it is logistically important to Moscow and has become relatively vulnerable following recent Ukrainian advances farther west.

There is still no prospect of talks to end the war, now in its 11th month.

Ukrainian President Volodymyr Zelenskyy is vigorously pushing a 10-point peace plan that envisages Russia fully respecting Ukraine’s territorial integrity and pulling out all its troops, something Moscow refuses to contemplate.

Russia’s President Vladimir Putin said on Sunday he was open to negotiations but only on his terms, which include Ukraine accepting the loss of four regions — Luhansk and Donetsk in the east, and Kherson and Zaporizhzhia in the south. Together, they comprise about a fifth of Ukraine’s territory.

The Kremlin on Wednesday dismissed Zelenskyy’s plan. Spokesperson Dmitry Peskov said: “There can be no peace plan for Ukraine that does not take into account today’s realities regarding Russian territory, with the entry of four regions into Russia. Plans that do not take these realities into account cannot be peaceful.”

Russia declared Ukraine’s Donetsk, Luhansk, Kherson and Zaporizhzhia regions as part of its territory in September after referendums condemned by Ukraine and Western countries. Russia does not fully control any of the four regions.

‘Pressure from the enemy has intensified’

“There has been very little change in terms of the front line but pressure from the enemy has intensified, both in terms of the numbers of men and the type and quantity of equipment,” said Ukrainian military analyst Oleh Zhdanov.

Zhdanov said that fighting had intensified with Russia deploying armoured vehicles and tanks.

Russian forces abandoned Kherson city last month in one of Ukraine’s most significant gains of the war. Kherson region, located at the mouth of the mighty Dnipro River and serving as gateway to Russian-annexed Crimea, is strategically important.

The joy of Kherson residents over the city’s liberation has quickly given way to fear amid relentless Russian shelling from the east bank of the Dnipro, and many have since fled.

Russian forces shelled the maternity wing of a hospital in Kherson, Kyrylo Tymoshenko, Zelenskyy’s deputy chief of staff, said on Telegram. No one was hurt and the staff and patients had been moved to a shelter, he added.

Reuters was unable to immediately verify the report.

In Wednesday’s report, Ukraine’s General Staff also reported further Russian shelling in Zaporizhzhia region and in the Sumy and Kharkiv regions of northeast Ukraine, near to the Russian border.

Reuters was unable to verify the battlefield reports.

In Bakhmut, home to 70,000 people before the war and now a bombed-out ghost town, which Russia has been trying for months to storm at huge cost in lives, Reuters reporters this week saw fires burning in a large residential building. Debris littered the streets and the windows of most buildings were blown out.

“Our building is destroyed. There was a shop in our building, now it’s not there anymore,” said Oleksandr, 85, adding he was the only remaining resident there.