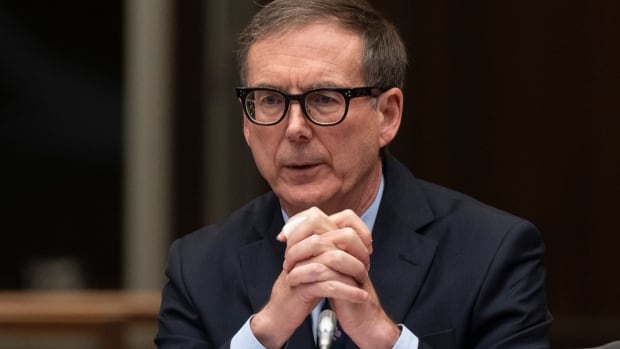 Bank of Canada Governor Tiff Macklem said Monday the risk of not rising rates enough and having inflation run wild is greater than the risk of raising them too much and fuelling a recession.

“We are trying to balance the risks of over- and under-tightening monetary policy,” Macklem told a business audience in Vancouver on Monday.

It’s the last time Macklem is scheduled to speak publicly in 2022, a year that has seen Canada’s central bank raise its benchmark interest rate an unprecedented seven times in an attempt to slow runaway inflation.

That aggressive campaign of rate hikes has cooled the housing market and prompted fears of a recession, but in his speech Macklem said, even after the bank raised its rate to its highest level since 2008, the risk of letting inflation burn out of control is greater than the risk that trying to rein it in might spark a recession.

“If we raise rates too much, we could drive the economy into an unnecessarily painful recession and undershoot the inflation target,” Macklem said. “If we don’t raise them enough, inflation will remain elevated, and households and business will come to expect persistently high inflation.”

“With inflation running well above target, this is the greater risk.”

The central bank signaled last week that it might be ready to pause its aggressive rate hike cycle but Macklem’s speech on Monday was a reminder that the bank’s policy will depend on the economic data, and whether the economy is showing signs of heading back to a normal inflation rate.

After peaking at 8.1 per cent in July, Canada’s annual inflation rate slowed to 6.9 per cent in October — still well above the Bank of Canada’s target of two per cent.

In his speech, Macklem made it clear that the bank’s rate hikes will achieve the goal of bringing down inflation at some point.

“Higher interest rates are working to rebalance the economy,” he said. “Inflation will come down … the adjustment will not be easy, but restoring price stability is the most important thing we can do to improve the economic and financial well-being of Canadians.”