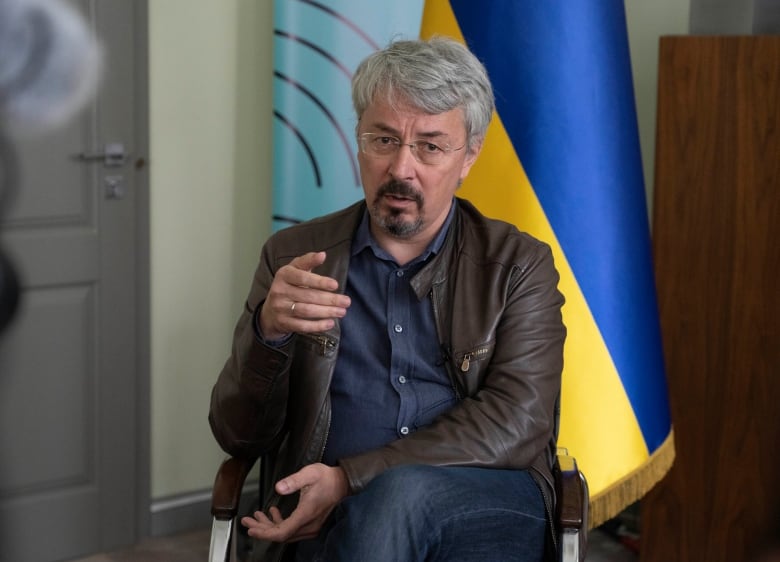 The exquisite golden tiara, inlaid with precious stones by master craftsmen some 1,500 years ago, was one of the world’s most valuable artifacts from the blood-letting rule of Attila the Hun, who rampaged with horseback warriors deep into Europe in the 5th century.

The Hun tiara, also known as a diadem, is now vanished from the museum in Ukraine that housed it — perhaps, historians fear, forever. Russian troops carted away the priceless crown and a hoard of other treasures after capturing the Ukrainian city of Melitopol in February, museum authorities say.

The Russian invasion of Ukraine, now in its eighth month, is being accompanied by the destruction and pillaging of historical sites and treasures on an industrial scale, Ukrainian authorities say.

In an interview with The Associated Press, Ukraine’s culture minister alleged that Russian soldiers helped themselves to artifacts in almost 40 Ukrainian museums. The looting and destruction of cultural sites has caused losses estimated in the hundreds of millions of euros, the minister, Oleksandr Tkachenko, added.

“The attitude of Russians toward Ukrainian culture heritage is a war crime,” he said.

For the moment, Ukraine’s government and its Western backers supplying weapons are mostly focused on defeating Russia on the battlefield. But if and when peace returns, the preservation of Ukrainian collections of art, history and culture also will be vital, so survivors of the war can begin the next fight: rebuilding their lives.

“These are museums, historical buildings, churches. Everything that was built and created by generations of Ukrainians,” Ukraine’s first lady, Olena Zelenska, said in September when she visited a Ukrainian museum in New York. “This is a war against our identity.”

Workers at the Museum of Local History in Melitopol first tried hiding the Hun diadem and hundreds of other treasures when Russian troops stormed the southern city. But after weeks of repeated searches, Russian soldiers finally discovered the building’s secret basement where staff had squirrelled away the museum’s most precious objects — including the Hun diadem, according to a museum worker.

The worker, who spoke to the AP on condition of anonymity, fearing Russian punishment for even discussing the events, said the Ukrainians don’t know where Russian troops took the haul, which included the tiara and some 1,700 other artifacts.

Dug up from a burial chamber in 1948, the crown is one of just a few Hun crowns worldwide. The museum worker said other treasures that disappeared with Russian soldiers include 198 pieces of 2,400-year-old gold from the era of the Scythians, nomads who migrated from Central Asia to southern Russia and Ukraine and founded an empire in Crimea.

“These are ancient finds. These are works of art. They are priceless,” said Oleksandr Symonenko, chief researcher at Ukraine’s Institute of Archaeology. “If culture disappears, it is an irreparable disaster.”

Russia’s Culture Ministry did not respond to questions about the Melitopol collection.

Russian forces also looted museums as they laid waste to the Black Sea port of Mariupol, according to Ukrainian officials who were driven from the southern city, which was relentlessly pounded by Russian bombardment. It fell under Moscow’s complete control only in May when Ukrainian defenders who clung to the city’s steelworks finally surrendered.

Mariupol’s exiled city council said Russian forces pilfered more than 2,000 items from the city’s museums. Among the most precious items were ancient religious icons, a unique handwritten Torah scroll, a 200-year-old bible and more than 200 medals, the council said.

Also looted were art works by painters Arkhip Kuindzhi, who was born in Mariupol, and Crimea-born Ivan Aivazovsky, both famed for their seascapes, the exiled councillors said. They said Russian troops carted off their stolen bounty to the Russian-occupied Donetsk region of eastern Ukraine.

The invasion has also wrought extensive damage and destruction to Ukraine’s cultural patrimony. The UN’s cultural agency is keeping a tally of sites being struck by missiles, bombs and shelling. With the war now in its eighth month, the agency says it has verified damage to 199 sites in 12 regions.

They include 84 churches and other religious sites, 37 buildings of historic importance, 37 buildings for cultural activities, 18 monuments, 13 museums and 10 libraries, UNESCO says.

Ukrainian government tallies are even higher, with authorities saying their count of destroyed and damaged religious buildings alone is up to at least 270.

‘We were afraid of the Russian occupiers’

While invasion forces hunted for treasures to steal, Ukrainian museum workers did what they could to keep them out of Russian hands. Tens of thousands of items have been evacuated away from the front lines and combat-struck regions.

In Kyiv, the director of the Museum of Historical Treasures of Ukraine lived in the building, guarding its artifacts, during the invasion’s first weeks when Russian forces sought, unsuccessfully, to encircle the capital.

“We were afraid of the Russian occupiers, because they destroy everything that can be identified as Ukrainian,” recalled the director, Natalia Panchenko.

Fearing Russian troops would storm the city, she sought to confuse them by taking down the plaque on the museum’s entrance. She also dismantled exhibits, carefully packing away artifacts into boxes for evacuation.

One day, she hopes they’ll go back to their rightful place. For now, the museum is just showing copies.

“These things were fragile, they survived hundreds of years,” she said. “We couldn’t stand the thought they could be lost.”