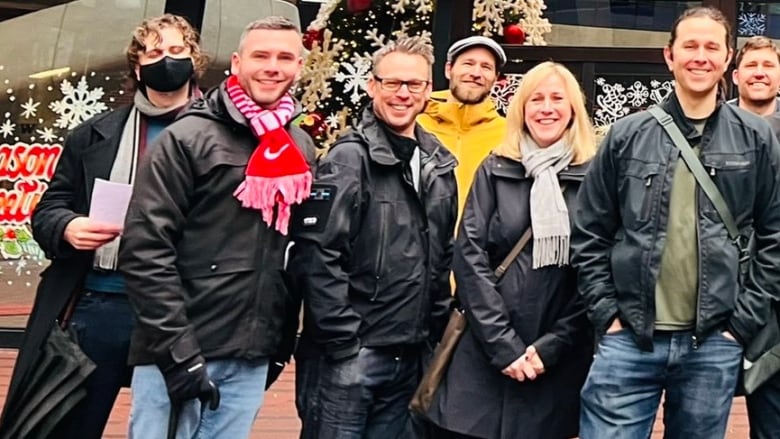 A Vancouver city councillor who recently retired as a police officer is defending his choice to wear a thin blue line patch. The city’s new mayor, Ken Sim, is also supporting Coun. Brian Montague’s use of the controversial symbol.

Montague was pictured wearing the patch in a post on social media by fellow ABC Vancouver party Coun. Sarah Kirby-Yung on Saturday while the two were taking part in a walking tour of the Gastown neighbourhood.

The thin blue line symbol includes a monochromatic Canadian flag with a horizontal blue line running across the centre. Despite its significance for many officers, some police departments across the country have ordered their members not to wear it on their uniforms, due to how it’s perceived in the communities they’re tasked with policing.

“Why is one of the councillors wearing a white supremacist symbol?” asked Twitter user @UrethraFranken

Why is one of the councilors wearing a white supremacist symbol?

“I was at this event and very nearly chose to duck out of the group picture when I spotted that a sitting ABC councillor was wearing a thin blue line patch. I’m now really regretting that I didn’t have the courage to do so. It’s gross, and ABC should be ashamed of this,” said James Marshall, who uses the Twitter handle, @JamesWestEnd.

I was at this event and very nearly chose to duck out of the group picture, when I spotted that a sitting ABC councilor was wearing a thin blue line patch. I’m now really regretting that I didn’t have the courage to do so.<br><br>It’s gross, and ABC should be ashamed of this.

Montague responded to one post about its use, saying that “it symbolizes a line of dedicated people who protect.”

“It is a memorial to many of the friends and colleagues I have lost. It symbolizes courage and sacrifice. I earned the right to wear it. How dare you, or anyone, attempt to redefine, hijack, or appropriate my symbol.”

The former Vancouver Police Department spokesperson, who won election to council in October, declined an interview request from CBC News, saying in an email, “Those who don’t like the police have provided their opinion, but I don’t think I need to say any more than I already have — my position is pretty clear.”

“As a veteran of the Vancouver Police Department, Coun. Montague wears the patch as a memorial for the many friends and colleagues that he and countless other officers have lost over the years — We stand by Councillor Montague’s choice to wear the patch,” said Sim.

“We condemn those who attempt to redefine or co-opt the thin blue line symbol for hatred or political purposes.”

Divisive history of the symbol

According to Martin Andresen, professor of criminology at Simon Fraser University, the “divisive” thin blue line symbol has a history that goes back more than a hundred years and has ties to colonial oppression. Andresen said it more recently became prominent after George Floyd’s murder by a police officer in Minneapolis, Minnesota, in 2020.

In reaction to the BLM movement, some groups turned to slogans like All Lives Matter — which is seen by many as a provocative rebuttal to the idea that Black lives matter — and used symbols like the thin blue line and a version of Marvel’s Punisher skull.

“The police have a long history of brutalizing, incarcerating, killing … people of colour,” said Andresen, adding that in Canada, it is often Indigenous people who disproportionately experience this.

Police ordered not to wear the thin blue line

Despite its significance for police officers — and former officers like Montague — many police departments have ordered their members not to wear the thin blue line patch on their uniforms or put decals of the symbol on vehicles and equipment.

“The historical roots of the thin blue line are in colonial ideals that have caused immense suffering for Canada’s Indigenous Peoples and people of colour all around the world,” the commission said.

“This ‘us versus them’ battle line depiction of policing inherent in the thin blue line is not consistent with the modern understanding that our world is not so easily divided into good and bad people,” it said.

In 2020, the RCMP directed its members not to wear the symbol. That decision was opposed by the National Police Federation, which encouraged its front-line members to wear a federation patch bisected by a thin blue line.

In Vancouver, the police department has not made a decision about the patch.

“Officers wearing those patches are not wearing them as any sort of show of white supremacy.”