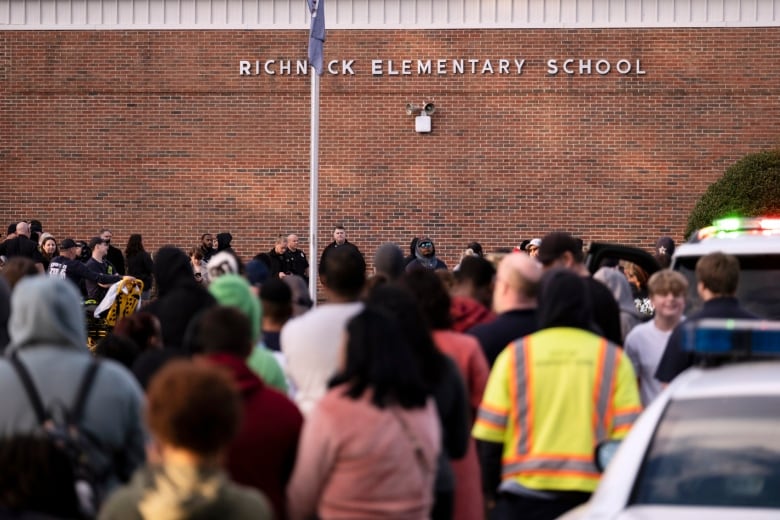 A Virginia teacher who was critically injured when she was was shot by a six-year-old student in Newport News, Va., is showing signs of improvement as authorities struggle to understand how a child so young could be involved in a school shooting, the city’s mayor said Saturday.

Newport News Mayor Phillip Jones said the condition of the teacher, a woman in her 30s, is “trending in a positive direction” as she remains hospitalized.

Newport News Police Chief Steve Drew met with the teacher and her family Saturday morning, according to a news release. “She has improved and is currently listed in stable condition,” the release said.

The boy shot and wounded the teacher in a first-grade classroom on Friday at Richneck Elementary School, according to authorities. Police Chief Steve Drew said the shooting was not accidental and was part of an altercation but didn’t elaborate further. No students were injured.

Jones declined to release additional details on Saturday about what led to the altercation, citing the ongoing police investigation. He also would not comment on how the boy got access to the gun or who owns the weapon.

“This is a red flag for the country,” Jones said.

“I do think that after this event, there is going to be a nationwide discussion on how these sorts of things can be prevented.”

Experts who study gun violence said the shooting represents an extremely rare occurrence of a young child bringing a gun into school and wounding a teacher.

“It’s very rare and it’s not something the legal system is really designed or positioned to deal with,” said researcher David Riedman, founder of a database that tracks U.S. school shootings dating back to 1970.

He said on Saturday that he’s aware of only three other shootings caused by six-year-old students in the time period he’s studied. Those include the fatal shooting of a fellow student in 2000 in Michigan and shootings that injured other students in 2011 in Texas and 2021 in Mississippi.

Riedman said he knows of only one other instance of a student younger than that causing gunfire at a school — when a five-year-old student brought a gun to a Tennessee school in 2013 and accidentally discharged it. No one was injured in that case.

Daniel W. Webster, a professor at Johns Hopkins University who studies gun violence, agreed that a six-year-old shooting a teacher at school is extremely unusual. But he said his research shows that instances of young children accessing loaded guns and shooting themselves or others unintentionally in homes or other settings are rising.

“A six-year-old gaining access to a loaded gun and shooting him/herself or someone else, sadly, is not so rare,” he said in an email.

Shooting not an accident: police chief

In the Newport News case, Drew, the police chief, said Friday that the shooting didn’t appear to be an accident and that it was isolated to the single victim. He said the student and teacher had known each other in a classroom setting.

“We did not have a situation where someone was going around the school shooting,” Drew told reporters.

He said the boy had a handgun in the classroom, and investigators were trying to figure out where he obtained it.

Parents and students were reunited at a gymnasium, Newport News Public Schools said via Facebook.

The police chief declined to discuss what contact investigators have had with the boy’s parents.

“We have been in contact with our commonwealth’s attorney [local prosecutor] and some other entities to help us best get services to this young man,” Drew said.

Newport News is a city of about 185,000 people in southeastern Virginia known for its shipyard, which builds the nation’s aircraft carriers and other U.S. navy vessels.

Richneck has about 550 students who are in kindergarten through the fifth grade, according to the Virginia Department of Education’s website. Jones said there will be no classes at the school Monday and Tuesday.

“Today our students got a lesson in gun violence,” said George Parker III, Newport News schools superintendent. “And what guns can do to disrupt, not only an educational environment but also a family, a community.”

Virginia law does not allow six-year-olds to be tried as adults.

In addition, a six-year-old is too young to be committed to the custody of the Department of Juvenile Justice if found guilty.

A juvenile judge would have authority, though, to revoke a parent’s custody and place a child under the purview of the Department of Social Services.