What’s behind Peru’s political crisis? Who are the players? And what might happen next? 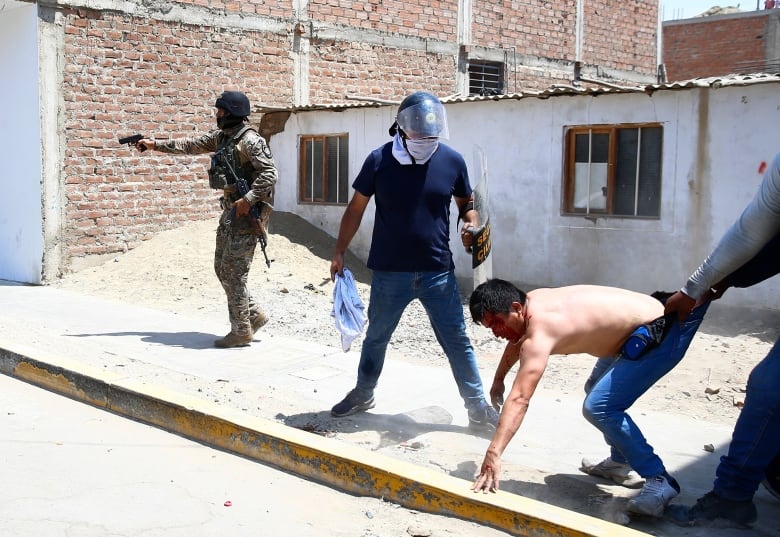 Peru has been gripped by protests and political intrigue since the ouster of its former president, Pedro Castillo, earlier this month.

The South American country’s security forces have imposed a state of emergency for 30 days, banning demonstrations, curtailing freedom of movement and allowing police to search homes without a warrant.

Protests and highway blockades have continued, however. At least 17 people have been killed in the protests so far, according to Peruvian authorities.

Castillo’s opponents say he was impeached in a constitutional fashion after overstepping his authority by trying to dissolve the country’s congress ahead of an impeachment attempt by lawmakers.

Supporters of the former union leader say he was unjustly removed and imprisoned by the country’s political establishment, arguing he should be allowed to continue governing or new elections should be held.

The Andean nation is the world’s second-largest exporter of copper but is rife with structural inequalities and poverty.

CBC News breaks down Peru’s political crisis, how the country came to this point and what might happen next.

Who is in charge now?

Dina Boluarte, who served as Castillo’s vice-president, was sworn into office on Dec. 7, the same day Castillo was ousted.

She is the country’s first female president and was not a particularly high-profile politician before gaining power.

As the unrest continues and police exercise sweeping powers, Boluarte’s hold over the government appears strained.

More than 70 per cent of Peruvians disapprove of Boluarte’s ascension to the presidency, according to polling data cited by local newspaper La Republica. Forty-four per cent approved of Castillo’s attempts to shut down the congress, the same poll said.

“State violence cannot be disproportionate and cause death,” Correa said via Twitter on Friday.

Who is former president Pedro Castillo?

Castillo was a political outsider who led a rural teachers’ union in one of  Peru’s poorest regions before winning the presidency in a run-off election in 2021.

He campaigned on reducing inequality, improving social inclusion and fighting corruption. His message resonated with the rural poor and Indigenous communities who had been largely left behind by Peru’s mining-driven economic boom.

Rivals painted Castillo as a Marxist radical; he was elected by a margin of fewer than 50,000 votes.

In office, many analysts considered the 53-year-old a largely ineffective leader. Fellow lawmakers attempted to impeach him three times before he tried to dissolve congress, and he spent much of his tenure fighting off challenges from other politicians rather than delivering on promised results.

Where is Castillo now?

Today, Castillo sits in a jail cell in pretrial detention while he is investigated for “rebellion and conspiracy.”

His supporters, who are protesting and blocking roads, consider that profoundly unfair.

“This should not have happened,” one pro-Castillo demonstrator told CBC’s The National. “He was kidnapped. Our pain is because of this injustice.”

What are other countries saying about Castillo’s ouster?

Some South American nations — particularly those with left-leaning governments, including Mexico, Argentina, Colombia and Bolivia — have lined up in Castillo’s favour.

Chile, which is governed by a left-leaning leader, and Brazil’s incoming president have said Castillo was deposed through legitimate constitutional means.

Canada, the European Union and the United States have backed the new government and criticized Castillo.

The United Nations and the Organization of American States have both accepted the transition as legitimate and have recognized the new government, CBC’s Evan Dyer reported.

The UN, however, has expressed “deep concern” over reports of deaths during protests and the detention of minors involved in demonstrations.

How is the unrest impacting tourism?

With such historic sites as Machu Picchu and the colonial city of Cusco, as well as a budding food scene, Peru has become a popular tourist destination.

It has also advised against non-essential travel to four regions — Arequipa; Cusco, including the Sacred Valley and Machu Picchu; Ica; and Puno — due to “violent demonstrations related to the political situation.”

Some of those areas are popular tourist attractions. More than 3,900 Canadians were in the country as of Friday, and many have been unable to leave.

“We feel the safest when we are at the hotel and we don’t go very far,” Canadian tourist Jennifer Korver told The National from Arequipa, a hotbed of unrest in the country’s south.

For now, the unrest seems likely to continue. Boluarte has become Peru’s sixth president in as many years. Supporters of Castillo had been calling for his reinstatement or at least new elections.

After initially suggesting she should be able to finish Castillo’s remaining 3.5-year term, Boluarte has recently suggested holding new elections in December 2023. That may not excite critics.

“It’s the latest cycle of this long cycle of instability,” Patrick Clark, a professor at Toronto’s York University who studies the country, told The National of recent unrest. “I think these protests are out of this exacerbation people have.”